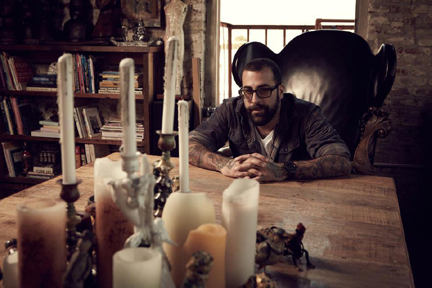 LA Weekly referred to HGTV’s Antonio Ballatore has as “the Lady Gaga of Interior Design,” and it’s a pretty apt description of him. Equal parts rock and roller, artist, designer, and showman, Antonio reminds us that life is what you make it, so you might as well make it fun. Between his New Yawk accent and my Texas twang, the playback of our interview is hilarious to listen to. Here’s what we chatted about:

What are you and your design team up to these days?

I’m looking into shared storefront space to feature functional art pieces, somewhere around the Art Walk in LA. We’re working on the Adoba Eco Hotel in Rapid City, South Dakota, including a restaurant and the main lobby—we’re redoing the whole place. We’re using eco-friendly materials and going that route with it, so that’s kind of exciting. We’re doing a spot in The Venetian in Vegas, a restaurant-bar which is like a burger/beer garden kind of spot at the hotel. For that, I’m pulling together all of the biggest graffiti artists in the country, trying to make it like a little rock and roll hall of fame with the graffiti artists and street artists. That’s going to be a really amazing space. I’ve got some of the top guys lined up. I can’t say who’s in it yet, but I’ve got some really big names in there. It’s about 6,500 square feet and I’m teaming up with my (Ingredient Group) partner, Chef Sammy D (DeMarco). He just opened up a couple of places in Australia and Vegas and Atlantic City. Chef Sammy D’s like the food version of me. We used to know each other back in New York, when I had a bar on Thirteenth and Avenue A in the early ‘90’s and he had a restaurant called First on the Lower East Side. We knew each other from back then and we hooked up and are trying to crank out a bunch of really cool places. I’ve got a couple of houses down in Orange County we’re doing. We just re-launched my website and that’s been a long time coming. I’ve got a bunch of really cool stuff going on! 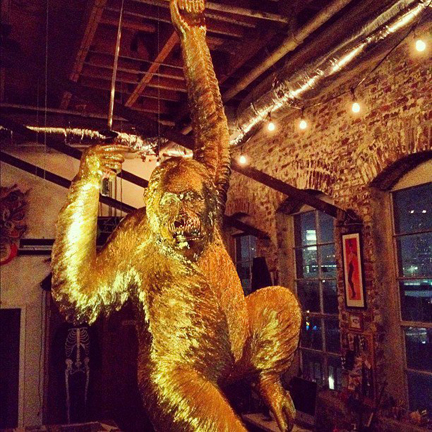 I saw some pink dinosaurs and a gigantic gold gorilla you posted on Facebook. Are they going in that storefront that you’re talking about doing?

The pink dinosaurs are for a backyard pool that I just did. Originally, I wanted all topiaries and Edward Scissorhands kind of stuff and then the reality of how much a thirteen foot topiary would cost versus a sculpture of a dinosaur—we had to switch it up. I had it painted with rollercoaster paint, which is super durable, and those will be lurking over the pool along with some crazy topiaries and a big lit-up Hollywood sign. It’s going to be a pretty sick backyard! The gold gorilla is a thing I found a while ago for my own house. I just found this new process where I can chrome pretty much anything. You use this crazy primer and then you shoot it with this liquid chrome stuff. The whole process takes 90 seconds—in 90 seconds the whole thing has to be sprayed, then there’s a clear coat and all that. It’s like the stuff that they shoot onto the backs of mirrors. We have a video of them chroming the gorilla on my website. I’m working on a lot of custom functional art pieces that’ll be coming out pretty soon.

It seems like your forte is working on commercial spaces. Is it harder to find people who are as fearless in their home décor?

Back when I was doing set design, everyone came to me for that over-the-top, crazy stuff. If they wanted something blown up or they wanted some crazy, over-the-top set, I was the guy to come to. It seems like that’s what’s happening with interior design. Everyone is coming to me knowing what I do and not expecting anything less, I think. They’re coming to me with an open mind and are more and more fearless. The days of the stock interior designer are not necessarily over, but I think a lot of people are opening up more and more to crazier things and getting more personal. They’re going with the biggest dream they can come up with. It’s good to be that guy right now. I think my stuff does lend itself to commercial spaces, but it’s funny how some celebrities are contacting me now and want that crazy stuff. I’m glad I’m the guy they come to for that! 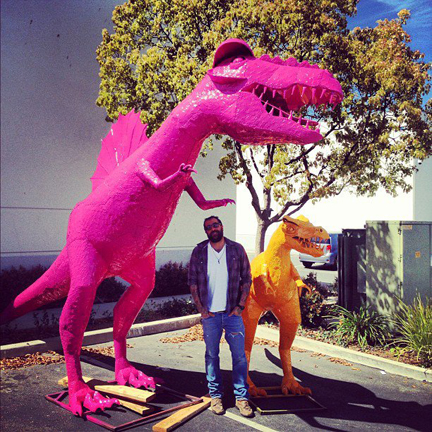 Why decorate your pool with waterfalls when you can have day-glo dinosaurs instead?

I love this idea of the pool, I can totally see it.

One was thirteen feet tall and the other was eight foot. The eight footer kind of lurks out over the hot tub and you can hang your towels on the hands of the dinosaur. It’s fun!

These techniques that you’re always using, they seem to drive the bus for your designs. Is that where you start? Do you see some interesting technique and figure out a way to work that into your next design or do you have an idea and search for a way to execute it?

The thing with the chroming, I knew of this process for a while now. I found this guy at Creations ‘n Chrome and he just happened to be a fan of the show and wanted to get into it, so we’ve got a lot of stuff we’re trying to work out together. He’s in the car business and wants to get more into interiors and furniture. Budget really drives most of the designs. I have ideas, but I also know a lot of people who do all sorts of crazy stuff with the Art Walk and all these different craftspeople and it just goes into the back of my head. I’ll know what I can do with certain artists and who to collaborate with based on—that drives the creative process a lot.

Are there any techniques or materials in the back of your head that you’re itching to use but haven’t found the right spot for it yet?

There’s always something going on. Right now the chroming is a big thing with me. With this hotel I’m doing down in South Dakota, I’m starting to get more into eco-friendly materials. I’ve always been interested in that but now we’re trying to make this hotel LEED-certified so it brings it to another level. That lends itself to a lot of cool materials, like recycled or recyclable rugs or wood. I think everybody’s moving toward that. Most of the cooler materials are all green anyway—at least in my eyes they are. For me, it’s the artists and craftspeople that are inspiring, more than the materials themselves. 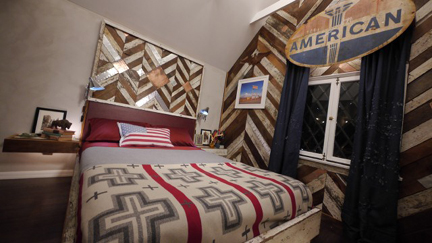 A bedroom design featured on The Antonio Treatment. 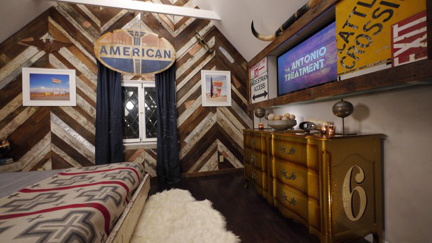 Another view of this bedroom.

Is there anything you would not put in a room, aside from beige paint?

I wouldn’t say never to anything. Never is a long time. There’s a time and place for beige paint! I’m constantly changing and evolving, so who knows?

I read that you spoke at the Surfaces convention. Did you see anything there that was a revelation?

I see a lot of really cool stuff at all of these conventions. I found this one product called Semco that can cover multi-surfaces in a concrete finishes and is 100% waterproof—it’s practically bulletproof, this stuff. There were all these great tiles and mosaics that came out. There’s so much new stuff out there that just blows me away every time I go to these conventions. It’s very inspiring.

You’re pretty different from your standard interior designer on television. Have you been embraced by that community or do they see you as more of an outsider?

I think everybody gets a kick out of what I’m doing and appreciates it. I have a lot of respect for everybody else. I did a thing at the Pacific Design Center with Kathryn Ireland, Martin Laurence and David Bromstad. Back in the day, I think they looked at me like I was a little bit crazy—at first, everybody talked to me like I was from another country. They were really loud and expected me to be this party guy, but now they realize that I’m just doing my thing and having fun with it.