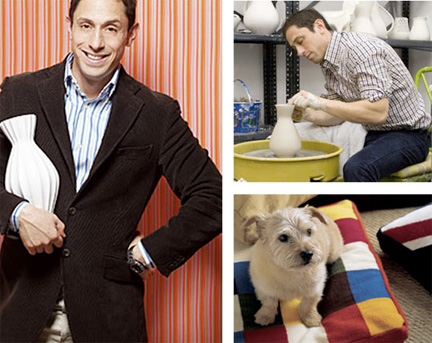 Room Fu Decorologist Claire Patrick spied an Austin Home Magazine blog post Monday morning announcing an event at Jonathan Adler’s Austin store–featuring THE Jonathan Adler himself. Would I go with her, she asked?

I immediately texted Jeb. “You have Phoebe duty Wednesday night, regardless of what you have planned. I’m going to meet JONATHAN ADLER!”

You know that “free pass” list married people talk about, where you name five celebrities you get to do it with, on the remote chance the opportunity presents itself? Well, dude is gay so that’s out, but that is the high level of intellectual crush we’re talking about here. Some of you may idolize Candice Olson, some may worship David Bromstad. For me, there’s no designer in the free world who does it better than my man Jonathan. When I walk into his store, there is not a single item I wouldn’t be thrilled to own. Everything is designed impeccably, everything makes me smile. I can’t tell you one other store on the planet where that is the case. When a client tells me they want to incorporate a Jonathan Adler vibe into the room we’re working on, I hear little baby angels singing.

The minute I woke up yesterday, I thought, I get to meet Jonathan Adler tonight! Then the nervousness set in.

What will I wear?

What will I say?

How do I stand out from the other schmoes in the room so that he likes me best?

I finally decided that wearing my Room Fu T-shirt would kill several birds with one stone: (a) couldn’t pass up an opportunity for a shameless plug–after all, I dig clients who dig Jonathan Adler; (b) it was clean, so I didn’t have to do laundry; (c) surely he will be compelled to ask, “What is Room Fu?” which gets the convo rolling; and (d) based on my ridiculous company name, he will know that I truly get the concept of Happy Chic AND HE WILL LIKE ME BEST.

But rolling into Jonathan Adler in a T-shirt and jeans does not exactly project the illusion that I have any kind of design sense. I went looking for some fun, distinctive shoes but struck out everywhere. Okay, I thought. I’ll find a cardigan in one of my logo colors and pick up some bold, statement jewelry. Nada on that front, too–couldn’t find anything modern enough for my taste. The only thing I did manage to pull off was a trip to Birds Barbershop for a haircut (go see Emily P at the SoCo location, if you’re looking for a great short ‘do).

I know. I sound like some kind of crazy stalker groupie. Thanks to Stephen King and Kathy Bates, I can’t even utter the phrase, “I’m your biggest fan.”

Let me just say, during the eight years I lived in New York City, I prided myself on not being a dumbass about celebrities. I saw tons of stars while living there–I watched Woody Allen shoot Bullets Over Broadway in my West Village neighborhood, I met Gabriel Byrne and chatted briefly with him in Chelsea, I ran into Boy George on Fifth Avenue, I had coffee next to Big Lips Stephen Tyler of Aerosmith, I had a convo with Roy Lichtenstein at the Metropolitan Museum of Art once, and I met luminaries like Elvis Costello, Kurt Vonnegut, Kinky Friedman and Dave Eggers at various signing events. I remember being excited about those run-ins, but this was different. I was kinda going batshit.

By the time it was 5:00, I was rating pretty high on the dork scale. Claire and I met up at Book People to sort of calm ourselves down in the cafe, but after a double shot and the onset of sweaty palms, I realized I was just going to have to embrace all of that adrenaline. It wasn’t going anywhere.

We headed over to the store at 6:30 and were immediately offered champagne and Shiner. The store was pretty crowded with a lot of architect and designer types. I saw one of the sales reps from the store, who clued us in to where Jonathan was and how to get a book signed. After purchasing my book, I waited for Claire to get hers and watched the cutest family stroll past me. Turned out the mama was someone I’ve met virtually through this blog and her own–Heather from the Brady Bunch Remodel! It was great to finally meet her in person after so many years.

While chatting with Heather, another woman cut in. “I’m sorry to interrupt, but I was so excited when you started following me on Pinterest!”

Shucks! That was so sweet of you to say, Susan! Especially from someone looking so cute, and also especially nice to get that little dose of design confidence before I met my idol!

At that point, we got in line to have our books signed. Claire discovered a friend named Genie standing in line ahead of us. As we looked over her shoulder, we watched Jonathan sign her book.

“FOR JE…” he started to write.

Jonathan quickly crossed out what he’d written and then in parentheses beside it, he wrote, (SORRY I F*CKED UP)

Underneath that, he wrote, TO GENIE (LIKE THE LAMP)

Wouldn’t you kill for something like that on your Jonathan Adler book??

My excitement was reaching a fever pitch at this point. Just look at me: 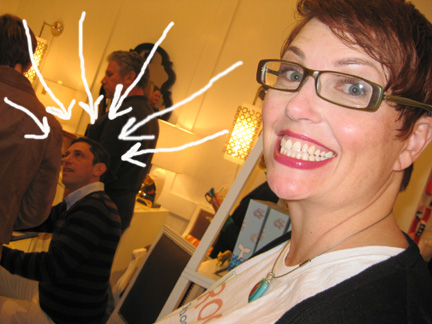 I was ridiculously happy, just standing there. What a goofball!

Then it was my turn, and just as I’d hoped, Jonathan looked at my shirt and asked, “What is Room Fu?”

I explained that it was my interior design business and he said, “Everyone needs some Room Fu!”

YES, JONATHAN ADLER. YES, THEY DO!

So I have. And I will continue to shamelessly milk that quote for all eternity, so get ready for the onslaught.

Jonathan signed my book but he penned my name perfectly, so I didn’t get any profanity on my title page. 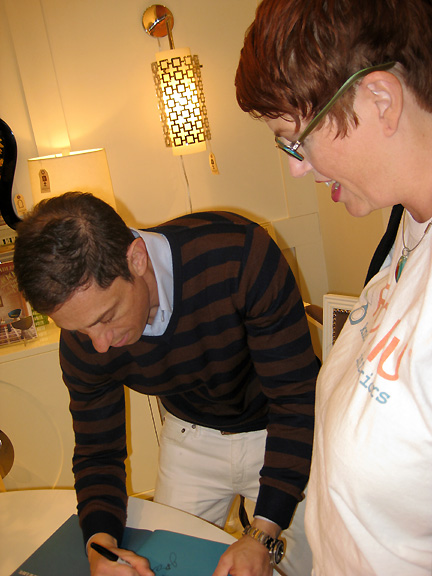 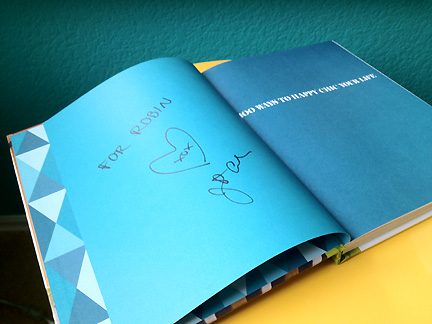 I asked if he’d pose with Claire and I for a photo. “Okay, we’re modeling!” he replied. 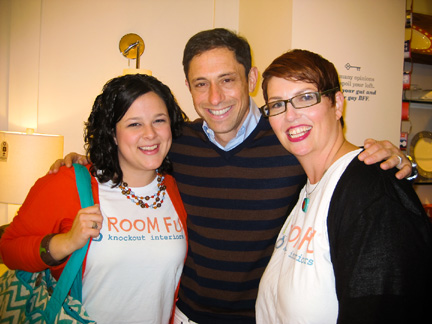 Look how precious he is! With all of that design sensationalism oozing out of him, I completely forgot my head. Forgot to ask him for an interview. Forgot to return the favor and take pictures of Claire with him. Forgot to have someone take pictures with my phone so I wouldn’t have to wait for Claire to get home and upload hers. Forgot, forgot, forgot.

Although we would loved to have spent hours with this cutie, that was the end of our story. Except that I left the store feeling insanely giddy and did not come off my cloud for a single second last night. Jeb couldn’t even make fun of me, because he knew what a coup this was. I’m still smiling from ear to ear, and I can’t wait to crack open 100 Ways to Happy Chic Your Life. I think I will do that right now.