In the middle of the maelstrom of pre-tag-sale-prep, I completely forgot to release the bonus content from my interview with Save My Bath designer, Krista Watterworth! It’s really fun, juicy stuff, too, so shame on me for the delay, but this is the perfect Friday distraction. 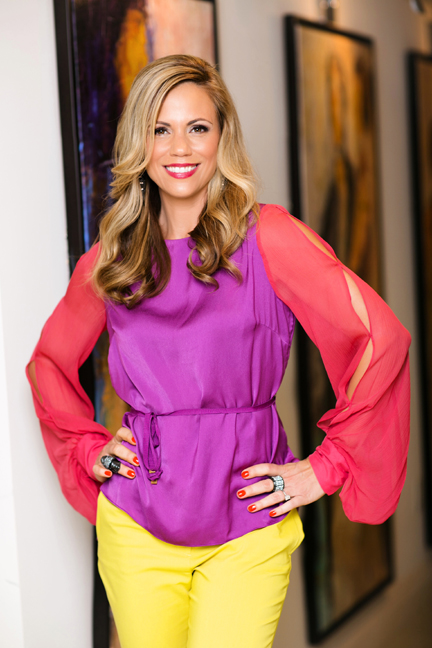 With your good looks, you seem perfect for a soap opera. Did you enjoy your brief stints on All My Children and As the World Turns?

I did! They were very short-lived. I played a mistress, so those roles don’t really stick around too long. You’re in, you’re out! I worked with Grayson McCouch on All My Children, who’s an amazing method-trained actor too. It was a pleasure. I was up-and-coming and he helped me so much in the scene and in preparation. It’s do or die in soap operas. They do a rehearsal, then a dress rehearsal, then they shoot it live and that’s it. There’s no retake and reset. You’ve got to kind of get it right—those guys have it down to a science.

Even though those were short experiences, do you think they helped you with your hosting skills?

Yeah, because you’re under the gun. It’s almost like improve or something. I think that you either thrive under that kind of pressure or you fall apart. If you thrive as a host, it’s very natural, and I think those are the best hosts. They make it look very natural. It’s the same as an interviewer, like you. If you feel like it’s a natural conversation, then it’s more real and people relate to it.

Can you draw any comparisons between soap operas and the interior design trade?

All of the sets need to be redesigned, I’ll say that!

Do you find that relationships with clients and contractors are similar to those on soap operas?

I can tell after one second with a client if it’s going to be a total disaster. I don’t work with clients like that—I’ll just walk away.

I worked with Vanilla Ice (Rob Van Winkle) and he and his entourage are pretty crazy, but they’re “fun” crazy, not cuckoo. When cameras are on, it’s a little easier to deal with that drama because it’s part of the show. When cameras are off and people carry on that personality, then it becomes a little more difficult. With my design firm, I honestly try to focus on people with whom I can enjoy the relationship. Life’s too hard! 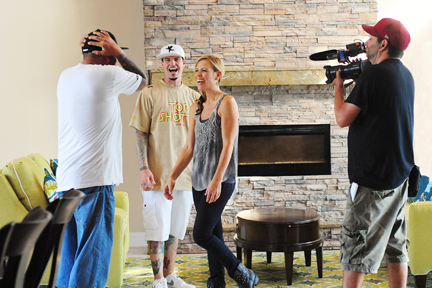 Rob Van Winkle and Krista Watterworth on the set of DIY Network’s
“The Vanilla Ice Project.”

Did you work with anyone at The Actors Studio who went on to an illustrious entertainment career?

Bradley Cooper was in the class before me. I would swoon over him, but we weren’t friends or anything. When you’re an acting student you are always out at pubs a lot and I would see him out often.

While I was doing the research to formulate my questions for this interview and reading about your work with The Vanilla Ice Project, I couldn’t get “Ice Ice Baby” out of my head. I wonder if that gets stuck in your head every second you’re on set with Vanilla Ice? I mean, how could it not?

I love that song so much! I have a dance party with my kids every night and “Ice Ice Baby” is always part of the mix. I love having that song stuck in my head. He’s so much fun—that show is such a blast.Rob is constantly quoting his own songs. Constantly! He always uses lyrics from his songs in conversation—it’s hysterical. He’ll do little dance moves from his videos—he cracks me up. Absolutely, many, many times that song is just right there. You can’t resist it.

Thanks, Krista, for such a fun conversation! Read the bulk of my interview with Krista Watterworth at Williams-Sonoma Designer Marketplace. For more information on Krista’s Palm Beach based design company, visit KristaWatterworth.com, or follow her on Facebook and Twitter.