Thanksgiving may be two weeks away, but we’re getting the Christmas season going early, thanks to our involvement with the UT Co-Op’s Celebri-Tree event. Local celebrities are being paired with designers to decorate Christmas trees that will be auctioned off to benefit The Rise School of Austin. A grand opening for this soiree will be held this Friday, November 15th at 6:30pm–just look for the big white tent in the food court behind the Co-Op. Visitors can view the trees through December 12th and vote on their favorite tree by donating a buck or two, or participate in the silent auction (minimum bid: $250), which will run through December 12th as well.

I had the distinct pleasure of decorating Judy Maggio’s tree yesterday, when she arrived with co-anchor Walt Maciborski and a boatload of KEYE Christmas ornaments, to trick out her tree. Turns out one of Judy’s besties is a client of mine (hey Theresa!), so that was great to hear. 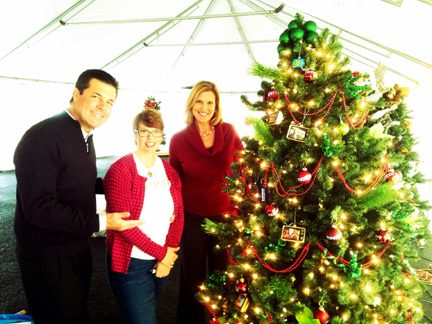 Judy and Walt went bananas over the ornaments I embellished for the tree–so much so, that they put it on the 6:00 news last night! (Thanks, Judy and Walt–now my eight-year old thinks I’m a celeb, too!) Their reactions made my day, considering what lengths my family and I had gone through to get them. After an exhaustive search for any TV-related ornaments, I found this creme de la creme glass ornament at Garden Ridge: 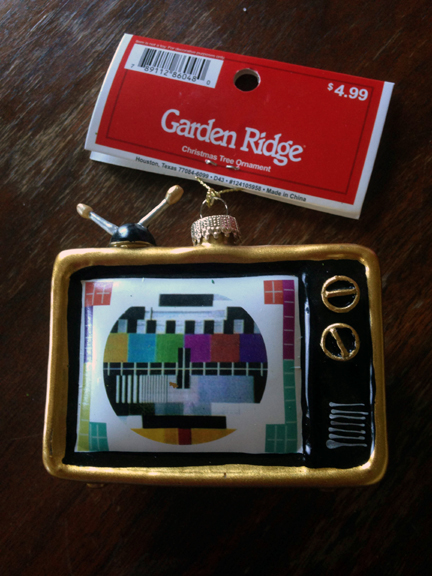 Unfortunately, there were only two unbroken TVs in the whole store, and the manager said they were not getting more. She suggested I try the other Austin area location. Bone to pick with Garden Ridge: why can I not reach a live human at any of your stores so I can check stock of an item and save myself the 40-mile roundtrip to Round Rock?? Can I just tell you how heartbroken I was to trek up there and not find a single TV? I started calculating how long it would take me to go to New Braunfels and whether or not I would qualify as a crazy person to contemplate driving there without the assurance they would even have any in stock. I’d just driven 40 miles to no avail…was it that much crazier to risk another 72?

But y’all, I had to have them.

So I enlisted the help of my mom. She agreed to check the Garden Ridge in Tulsa, Oklahoma and JACKPOT, she found seven. SEVEN! What a score!

Look how cute they came out, after I ModPodge’d some pics from Facebook to them: 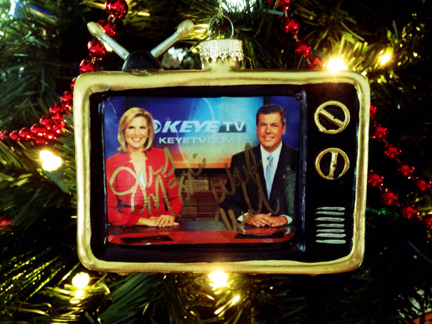 I asked co-anchors Judy Maggio and Walt Maciborski to add their autographs to this ornament. 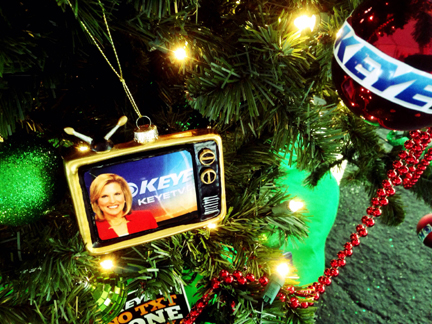 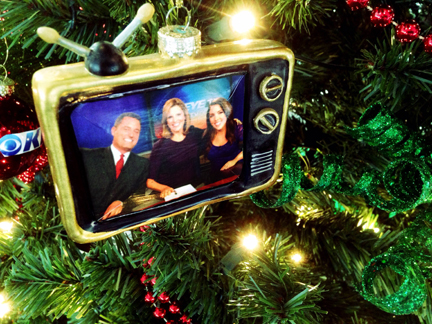 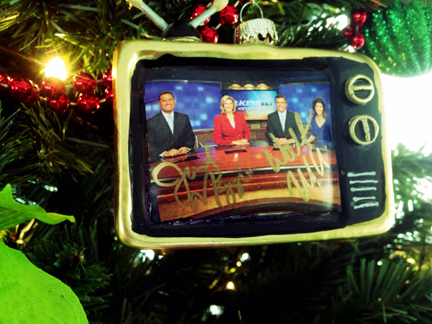 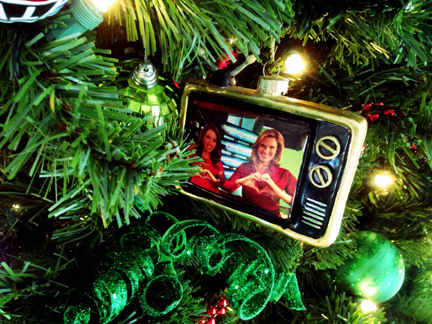 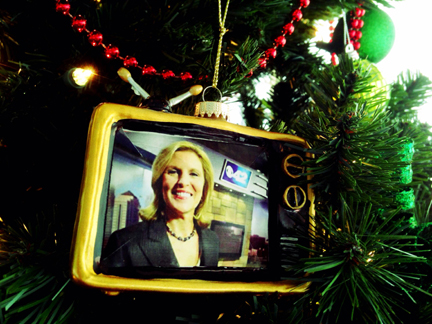 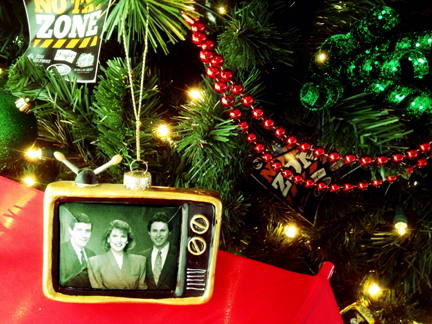 Blast from the past: Dick Ellis, Judy, and Ron Oliveira, back in 1990.

While I was waiting for the verdict from Tulsa, I tracked down some tiny TVs via Fab.com and quickly placed an order, just in case my mom struck out like I had. Here’s one featuring an Austin weather map: 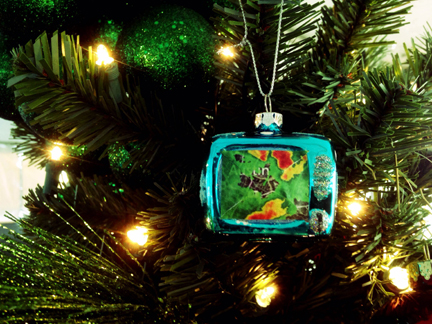 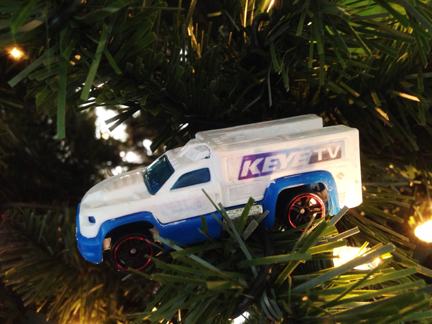 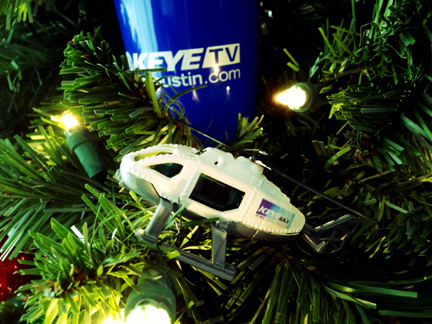 To round things out, I ordered a real green screen to make the tree skirt out of. Such is my mania… 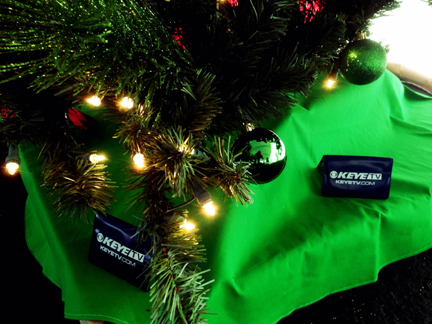 Judy and Walt brought a Storm Chaser supersized umbrella, too. Bid on this tree and you may be totally taken care of the next time we catch a downpour! 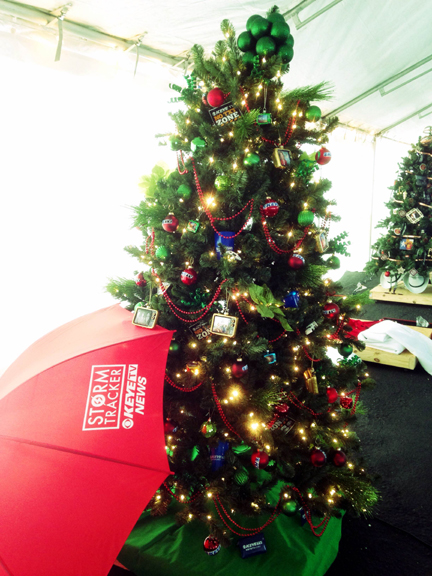 It was a total blast putting this together–just 100% fun, quirk and creativity. Don’t forget to come out and vote for your favorite Celebri-Tree and join the bidding process, too! Other featured celebs and sponsor participants include:

Stay tuned for pics of the tree I decorated for Asleep at the Wheel’s Ray Benson.

P.S. Thanks again for your help, Mom!