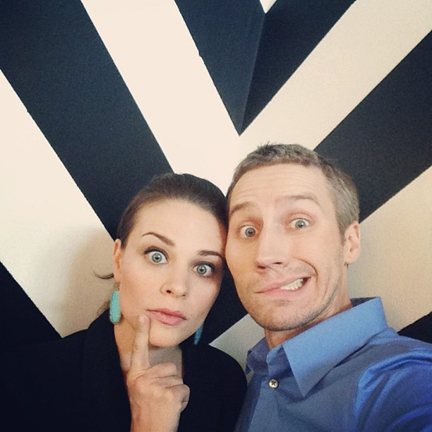 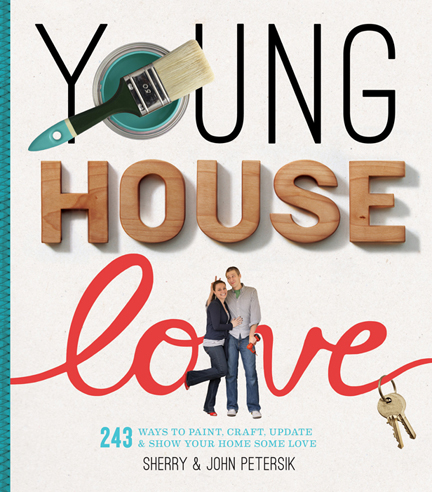 While they were still galavanting all over the country, they took time out to sit in the hot seat for my interview for Williams-Sonoma Designer Marketplace.  Get all of the scoop on your favorite do-it-yourselfers here!

Buy John and Sherry’s book and check out their blog. 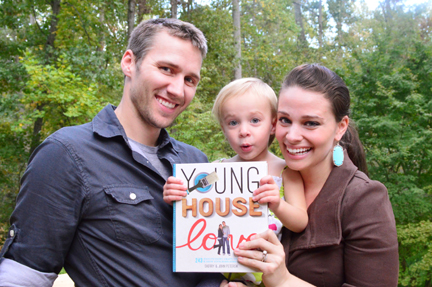 John and Sherry Petersik started a blog to share their first home improvement project with their friends and family. Since then, their blog Young House Love and their best-selling book by the same name have become the go-to resource for all things DIY.

You describe yourselves as “over-sharers.” Have you always been that way?

In college, one of my teachers nicknamed me “the narrator of life.” I didn’t even realize I was doing it, but he said I constantly described what I was doing. “Everyone else will be quietly getting their homework out, but you’ll actually say, ‘I’m getting my homework out.’” When I work at home by myself, I realize I’m constantly talking and no one’s here. I’ll say, “Oh, I forgot to go to the post office,” and then think, why did I have to say that out loud? I could’ve just thought it to myself. I’ve never been one to reveal crazy secrets—I’m the person everyone tells their secrets to. I’m pretty quiet and have a good poker face but if someone asks me how I’m doing, I don’t just say, “Good.” I’ll launch into a conversation about how this happened or that happened instead of glossing over everything. John’s favorite job he’s ever had was at the information desk at University of Virginia because he got to help people and solve problems. He can talk to a stranger about anything. He liked dispensing information and being helpful and communicating. So I think somewhere in our past it’s been ingrained in our personalities and it’s natural to blog about things.

How do you divide the duties on the business side of things?

That is something that is always in flux and we’re always juggling. Recently John has been doing more of the business side of things. It’s what he’s actually good at and what he loves to do. He loves to do our expenses and manage advertisers. He was an account manager in advertising—he was the client liaison and he balanced budgets, so that all seems comfortable to him, whereas I never had to do that when I was a copywriter. I was an art director by trade, so I’ve been good at Photoshop and designing and writing but not that great at talking to clients or dealing with numbers and spreadsheets. Those are things I’m terrible at! Don’t make me make a spreadsheet! I’m the person who calls Microsoft Word “PowerPoint.” I don’t know the right terms for things and am ridiculously bad at that stuff.

You two proudly call yourselves “cheap,” but now that your book is doing so well and you have product lines, is there anything you look forward to splurging on?

People have asked us, “If you won the lottery, would you still be cheap?” I think the answer in all honesty is, I think we were just born this way. Both sets of our parents have worked really hard to be financially comfortable and they’re cheap too. I think the reason they’re comfortable is that they’ve been cheap their whole lives. They’ve made smart decisions. We were both raised by people who said, “Pay off your credit cards. Never carry a balance! Never buy something you don’t have the cash for right now.” We’ve learned to live that way and it’s a comfortable way to live. It makes you feel good—you sleep well at night. There’s a peace of mind that comes with it. Maybe we would splurge on something experiential, like taking our family on vacation or do something we would remember forever that would mark this moment in history when we were like, “Oh my gosh, we were best sellers!” Then we’d go back to driving one car and living modestly. It would feel like we were playing dress-up if we lived in a big mansion and had a Rolls Royce. Not that that would ever be available to us!

You have toyed with the idea of hiring an intern before. What would have to happen for you to actually hire employees to help share the workload in your business?

We never, ever want anyone to think there’s a crew behind the curtain and people are working away for us. Part of the appeal to us is that it’s been this grassroots thing. Both of us like to be creative and do it ourselves—those are quantifiable points that we appreciate about this job. If we’re outsourcing the fun stuff and the creativity—or even if we’re outsourcing the not-so-fun stuff—in some ways it cheapens the idea that this is a DIY diary of our life. It’s kind of like working at a two-person magazine or newspaper. Over five years, we’ve done two to three projects every single week. If we take a week off to go on tour, instead of doing two or three projects that week, we do six projects the week before so that we have new content for that week. There’s something comforting to the fact that we’re only two people and therefore can only do so much. When you start to get into hiring people and becoming a big team, you might bite off more. You’re cogs in a machine. We’re not “President” or managerial staff. We’re just in charge of what we do and we don’t have people under us to grease and evaluate and all the things that come with being a manager.

So you don’t farm out bookkeeping or anything?

We have an accountant for tax reasons, because we don’t know the ins and outs of that, but John does the books himself in Excel. We’re highly involved but the accountant files for us and does our complicated quarterly taxes. People ask if we have a housekeeper, but we clean our own house. We don’t have a secret babysitter for Clara behind the scenes. She’s with us all the time, aside from once a week, she spends time with John’s parents. We’re normal people juggling normal things.

Now that you have the book, do you have a publicist?

We do have a publicist for the book. She arranged the whole tour for us but she doesn’t do our interviews for us or do book signings for us. We call her the “puppet master” because she tells us where to go and when to be there. She’ll tell us, “You’re going to Austin next week—get ready!” Some people have a publicist who answers email interview questions for them, but we don’t do that. We didn’t hire her—she came with the book deal. I don’t think they trust us without her!