Jeb and I were watching The Amazing Race last night and were appalled to see most of the contestants (all Americans) draw a blank in Cambodia when given a photo of Jacqueline Kennedy Onassis.  They were instructed to find the photo hanging somewhere in Phnom Penh and most of them were like, “we have to find this lady.”  One of the contestants thought she was Queen Elizabeth.  Even on a good day in her youth, Her Royal Highness didn’t hold a candle to Jackie O, people. Another contestant thought she was “some Cambodian woman.”

Yet eight out of the nine Cambodian cab drivers the contestants asked were able to identify Ms. Onassis.

It was at that point that I suddenly felt The Great Divide.  Like now I’m 80 and lamenting the stupidity of our youth.  I guess I just wasn’t ready for the realization that Jackie Kennedy wasn’t at least as famous as Lady Gaga.

So just in case there are some youngsters out there who aren’t familiar with what Jackie brought to the table, I thought I’d throw a little visual primer together, because the very people who don’t know who she was have probably sported her iconic look at one time or another: 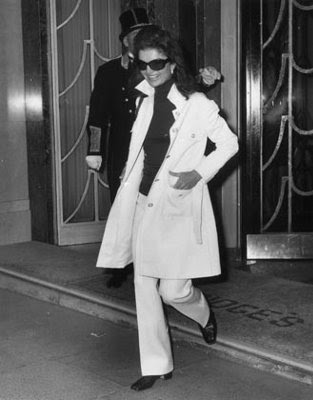 Oh, and just so you know, the dude next to her in the next-to-last photo was her first husband, John F. Kennedy, and he was our 35th President.