Last week we watched a very dull episode of Design Star that ran aground of its full potential. Charged with incorporating assigned colors in meaningful ways, the designers had full reign to lavish eye candy upon us…but none of the designers really did so. Mikel Welch was sent home for creating a sickly green space–his second time to do so this season. That leaves Britany Simon, who won the color challenge, plus Danielle Colding and Hilari Younger rounding out the final three.

Exterior and interior views of the designers' yurts, before their makeovers.

Yurt decor may not be a hot topic on HGTV, but yurt hotels are actually popping up all over the US, Spain,  Norway, and the UK, so it’s surprising that world-traveler Danielle is unfamiliar with them. There are two things you have to work around when decorating a yurt: they’re round and they feature a lattice structure that is typically visible inside the space. Both of these things can be somewhat difficult to work with. Here’s how I rate the resulting rooms:

During this episode, I am borderline WHORE-i-fied by how much schlock I see Hilari gathering up to put in her yurt. As has been her issue in the past, I am expecting her to have an editing problem, leaving too much junk and clutter in the space. When they do the reveal, however, I am blown away. 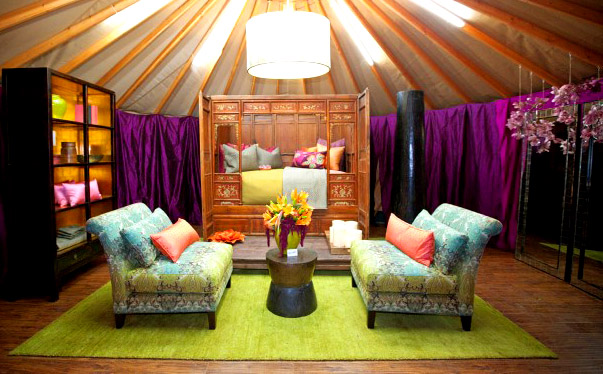 The 500-year old daybed actually looks comfortable, chic and luxurious the way Hilari has styled it, and she’s managed to modernize it by using saturated colors in her bedding selections. She’s the only finalist to get pillows right in this challenge. 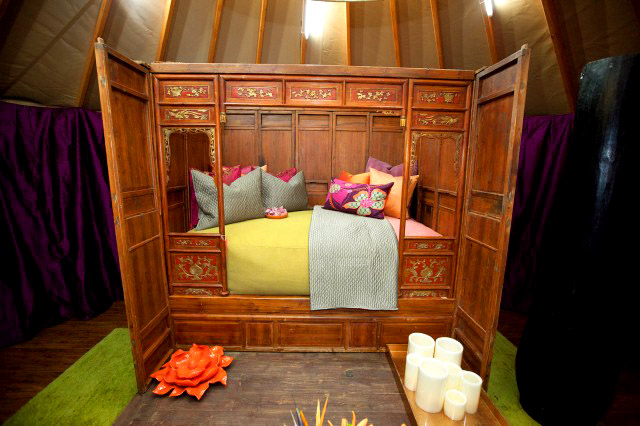 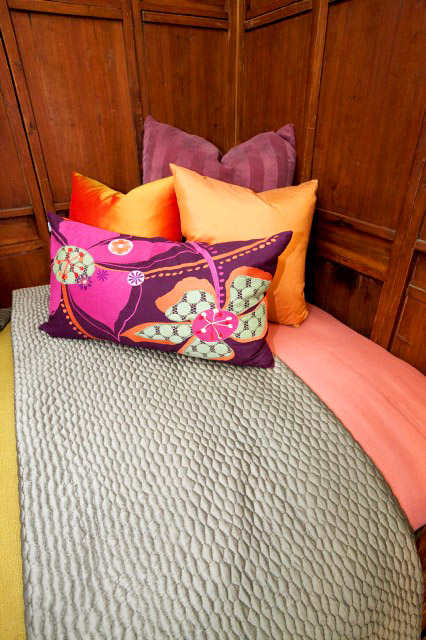 The bright silk around the room features gorgeous color, her gold-leaf’d shelving unit glows with glam and her seating area is as striking as the bed. 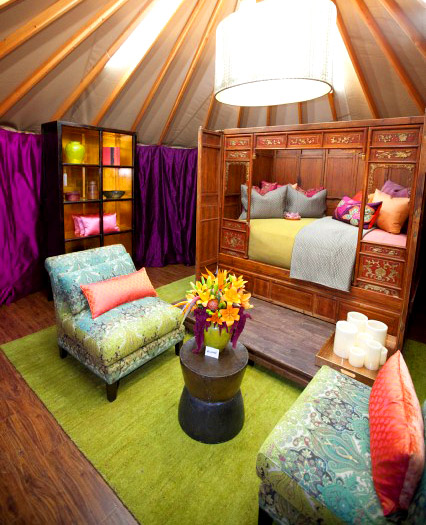 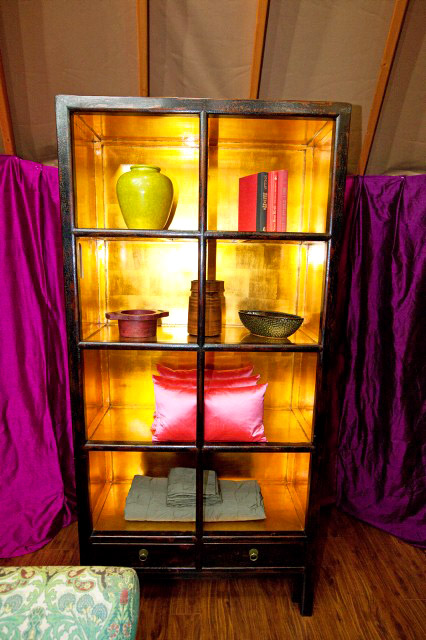 Overall, I applaud how simplified Hilari’s yurt is, how enticing it is visually, and how DIFFERENT it is from the pages of yurt hotels I looked at before writing the last paragraph. I would like to see Hilari’s wall fabric a little more tailored–maybe stapling it to the top and the bottom of the walls would pull this off–but other than that, SIGN. ME. UP.

There are some great elements in Britany’s yurt, but I’m not getting a cohesive vibe at the end of the day. 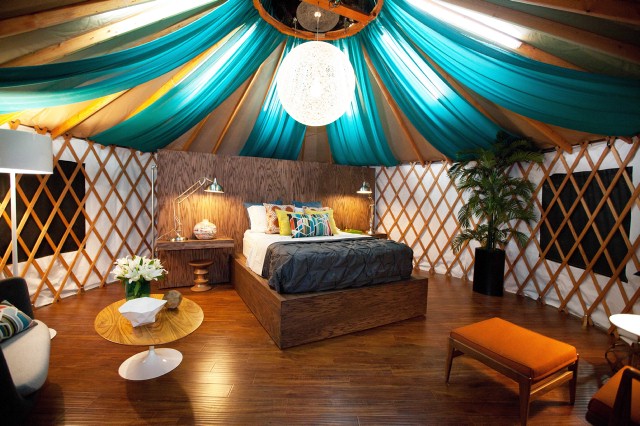 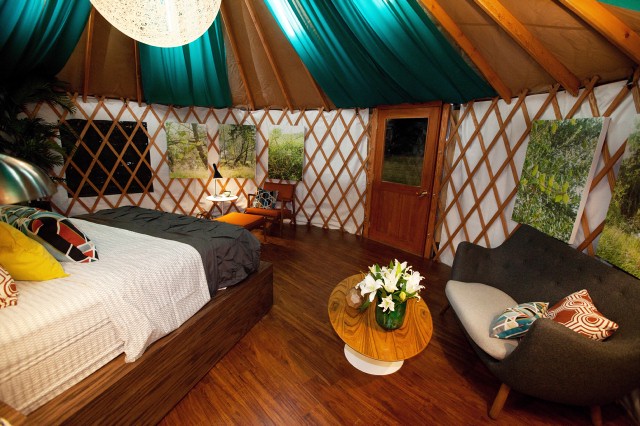 There’s some pillow ADD going on on the bed and this combination of patterns isn’t hitting it for me. I’m also not a fan of the drab gray duvet. 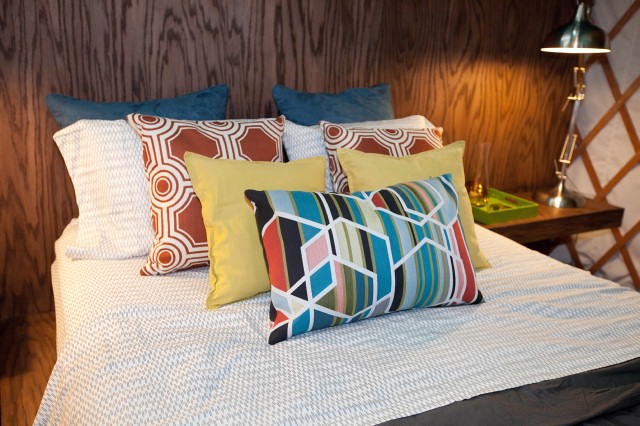 Pulling in teal yet again, this is Britany’s fourth time to use teal/aqua as a major palette color. I’d love to see her go a different direction. Britany’s room is more hip than most of the yurts in the world, but it’s not necessarily anything giving me much in the way of “fantasy.” Her movable bed is a novelty, but not much more. I would love to see the headboard curve to fit the shape of the walls. 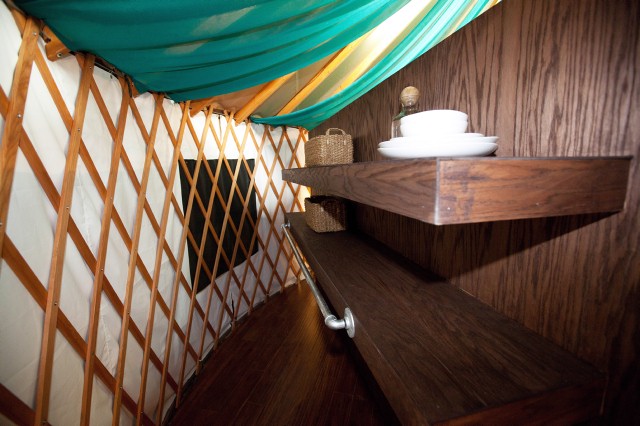 While I applaud Britany creating custom art from her own photography, I’m with the judges–I’d rather see more abstracted imagery. Or maybe some accent color to make the art feel less like a plain window. 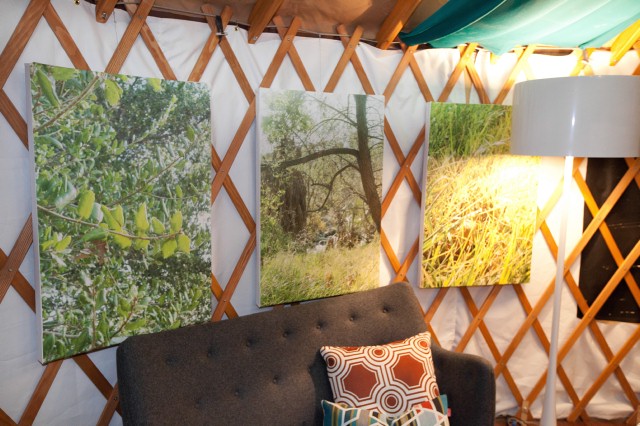 Britany incorporates enlarged prints of her photography into the yurt.

Much ado is made of Britany’s lighting choice. While it’s great scale-wise and shape-wise, I’m so bored with this particular pendant design that it doesn’t rate the rave. 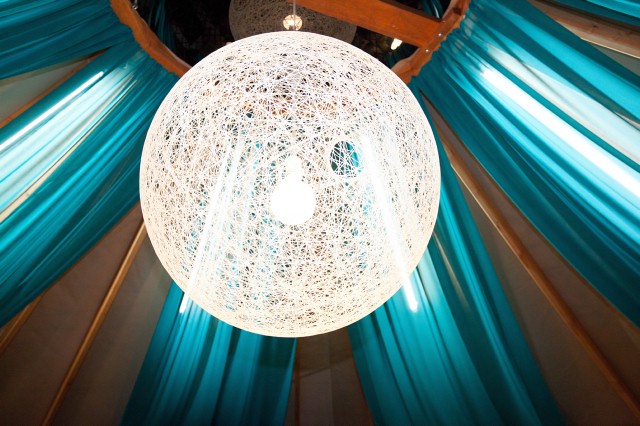 Sending Danielle home this week is the LAST thing I want to do, but the truth is that I like her yurt the least and she seems to botch her first camera challenge pretty hardcore, so all along I assume the judges will send her home. If it were me, I’d be like, All three of you are getting a show–congrats! But that’s not the way this game is played, and when Hilari’s name is called to go home, I realize Danielle’s yurt is SO. VERN. 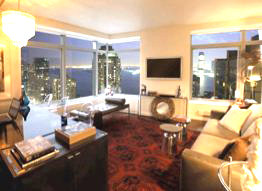 Vern’s Chicago version of HGTV’s Urban Oasis Giveaway was to die for, but his NYC apartment for the same contest a year earlier really bites…and Danielle’s yurt looks just like it. 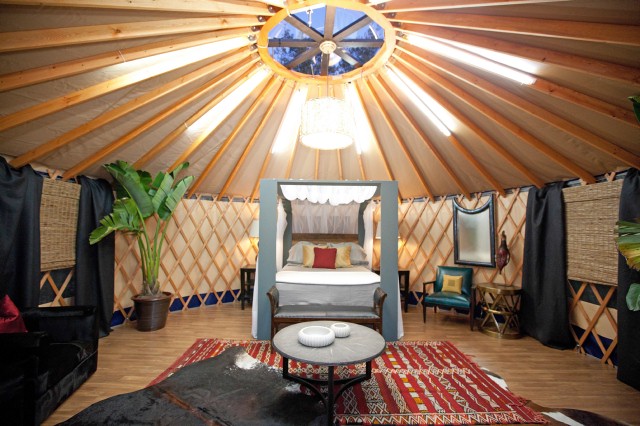 So I guess Danielle gets to stay. After all, if you emulate a judge’s personal style, they can’t very well vote you off. Plus, I’ve heard rumors that the designers who include the most merchandise from sponsors of the show get higher marks than those who don’t. These are the only reasons I can imagine Danielle beating Hilari out this week.

Personally, I think Danielle’s yurt is also very much like her Art Deco room from the fifth episode–beautiful individual pieces that combine to bore the holy hell out of me. I’m not getting any visual drama out of this room, and I’m not even feeling transported, despite her “traveler” theme. Woe. 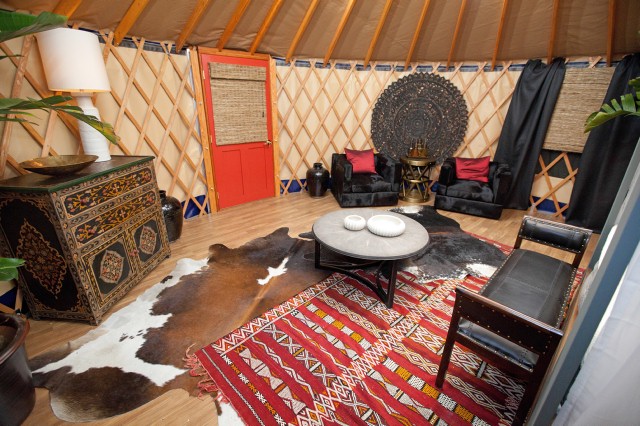 Why is there a coffee table in the middle of the room?? 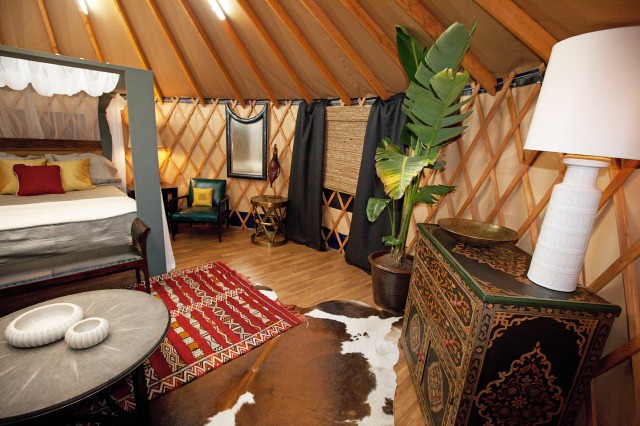 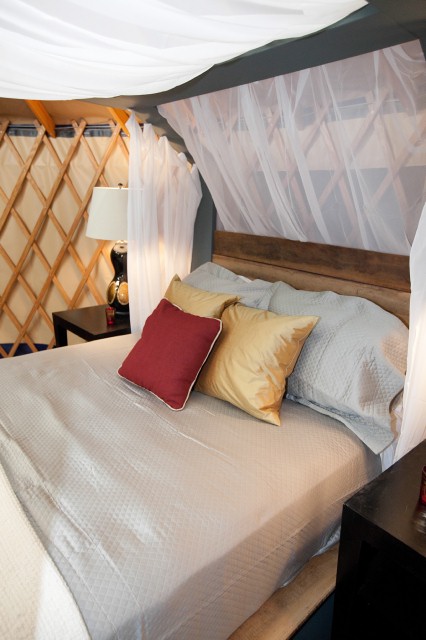 In the end, I’m SHOCKED that Hilari is called out to go home, but she gets a pretty sweet consolation prize–a berth in the upcoming Design Star All Stars, which will begin airing July 31st on HGTV. Joining Hilari is season 2’s Sparkle Josh, season 4’s Dan Vickery, seaon 5’s Tom Vecchione, and two ladies from season 6: Kellie Clements and Leslie Ezelle.