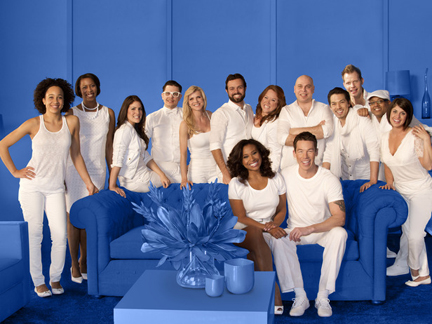 HGTV giveth, and HGTV taketh away.

After conducting interviews with the castoffs of seasons 4 and 5 of Design Star, it looks like there won’t be any of that this year.  Am I sad about it?  Yes and no.  Yes, because it was fun to get some inside scoop, delve a little deeper, and get a chance to reveal the real personalities behind the reality show characters.  But that upside only represents about 20% of the equation.  Here’s why 80% of me is actually relieved:

I don’t have to waste my time on the finalists who sucked. I spent a ton of hours on each interview post.  This was obviously a labor of love when it came time to interview finalists whose work I admired or whose personality seemed fun on the show.  But I’ll tell you, I’m a pretty direct southern lady and I don’t cotton to a lot of bullshit, so if I didn’t respect someone as a designer, I resented spending my time and bandwidth on them.  As they say, the show must go on, and I figured if HGTV was kind enough to grant me the interviews I did want, I had to buck up and conduct the crappy ones too.  I will not mourn the loss of that!

More billable hours, yo! There are a finite number of hours in the day, so the time I used to spend researching the finalists, developing interview questions, conducting interviews, transcribing and editing them, and doing extensive photo research can now be used to do actual interior design work.  More billable hours, more cash in my pocket.

Last year’s traffic sucked anyway. During the Season 4 cycle, I enjoyed a 6.5x increase in traffic to my blog.  Last year’s traffic was dramatically less than that–only 2x the level of my pre-season traffic.  While doubling your unique readership might sound good, that kind of result wasn’t worth the loss of income potential or the amount of time and effort I put into it.

This year’s traffic doesn’t look so hot either. If you compare viewer interaction with HGTV’s own Design Star blog this year versus last year, there’s a sharp decline in comments–less than 400 through this season’s first episode compared to nearly 1100 the same time last year.  Part of that decrease in interactivity can be attributed to the fact that HGTV is no longer featuring posts from superstar blogger, Dooce, whose recaps really drove up last year’s numbers.  That level of viewer disconnect with HGTV’s own blog tells me that I won’t see much of a bump myself, and if my traffic is worse this year than last, it doesn’t make fiscal sense to give up the billable hours.

As a time/cost-savings measure, I had hoped to conduct this season’s castoff interviews via Skype, record them using an app like Supertintin, then just post the unedited interviews on my blog.  This would have dramatically reduced my time commitment to the endeavor and seemed like it would be more fun for the reader as well.  Too bad I couldn’t at least have tried it.

I invite any of this season’s finalists to go rogue–give me a call!