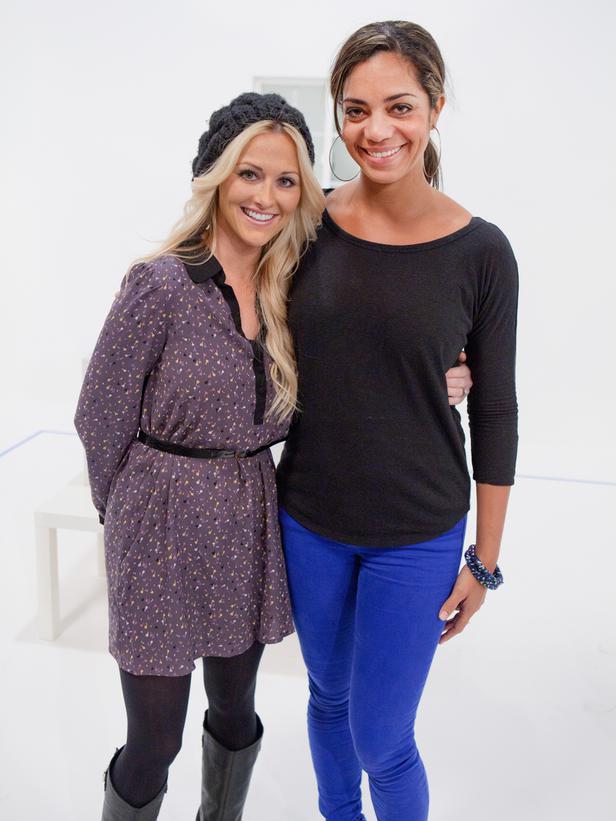 I’m down with the flu this week, falling asleep anytime I find myself on the couch longer than five minutes. Yesterday, I started to come to with the voice of David Bromstad in my ear. He was talking about Britany and Danielle and I wondered, why is David Bromstad in my living room? Turned out Phoebe had taken it upon herself to watch the finale of Design Star WITHOUT HER MAMA.

She was all fired up over finalist Britany Simon. “I want her to win SO BAD, mama,” Phoebe cried. “She’s a FASHION ANGEL!” Phoebe went on and on, talking about how Britany was the best designer this season. “I’m sorry to say it, mama, but her kitchen? It’s prettier than the kitchens you’ve done.”

Now that it’s finale time, I’m anxious to see if my Facebook theory will pan out. Britany is quite the social media maven and she’s been burning up the bandwidth, asking her Facebook and Twitter followers to vote for her in the contest to win an online show. Over on Danielle’s Facebook page? Crickets. Anyone reading between the lines can figure out that Danielle doesn’t need to worry about winning an online show–she has the big one bagged already.

As for the last challenge, both designers are creating five-minute pilots for their future design show and this involves working with real homeowners again.

Britany’s show concept capitalizes not only on her skills as an interior designer, but her photography experience as well–much like the paintings David Bromstad creates for homeowners in every episode of Color Splash. 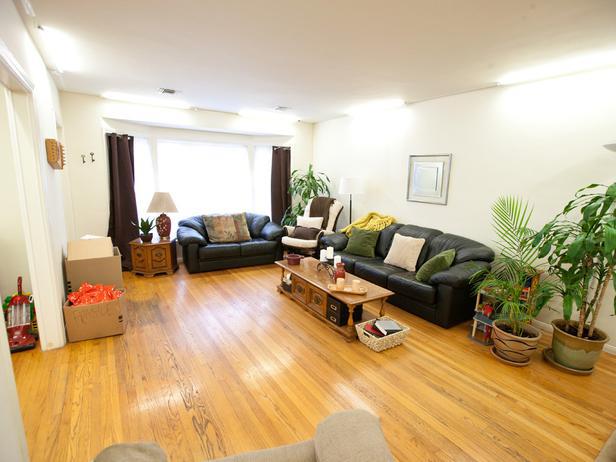 BEFORE: Britany Simon will makeover this living room for her mini-pilot, Picture Perfect Spaces. 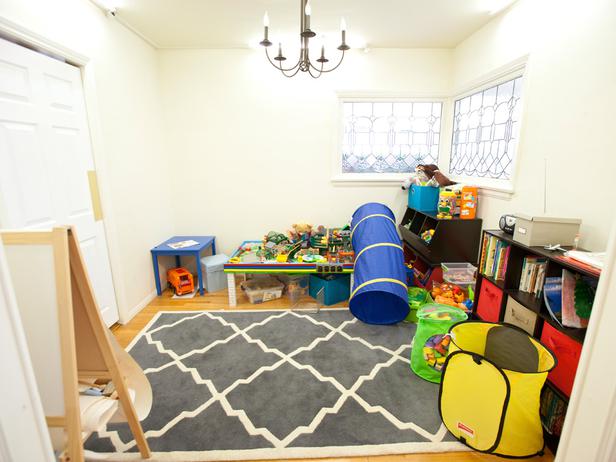 BEFORE: The dining room Britany will also redo for her homeowners.

After watching Britany limp along with a substandard camera in earlier challenges, it’s nice to see she finally gets to use a decent camera for the finale.  She conducts a photoshoot with the homeowners and their adorable son, coaxing smiles out of the kiddo with the promise of a donut. The family portraits turn out amazing–what a bonus for the clients! I think it would be a little difficult to make portraits work throughout an entire season, but if Britany could open it up to more artistic and abstract expression, this seems like a great way to create original art for a show. I’d much rather see this than most Design on a Dime art projects.

Britany eliminates Toy Central, per the homeowners’ direction, and creates a very chic space. As a parent who has lived through infant and toddler periods where The Child took dominion over the house, I can appreciate the retirement of Toy Central and the reintroduction of a real dining room.

Britany’s interaction with her clients seems easy-going and genuine. I love the art she selects for the living and entry, her wainscoting is beautiful–despite how much I am over wall molding on this show–and her use of color and pattern is bold and graphic, as usual. 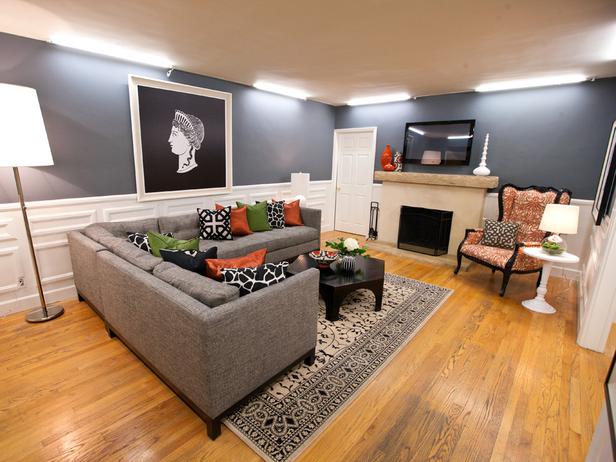 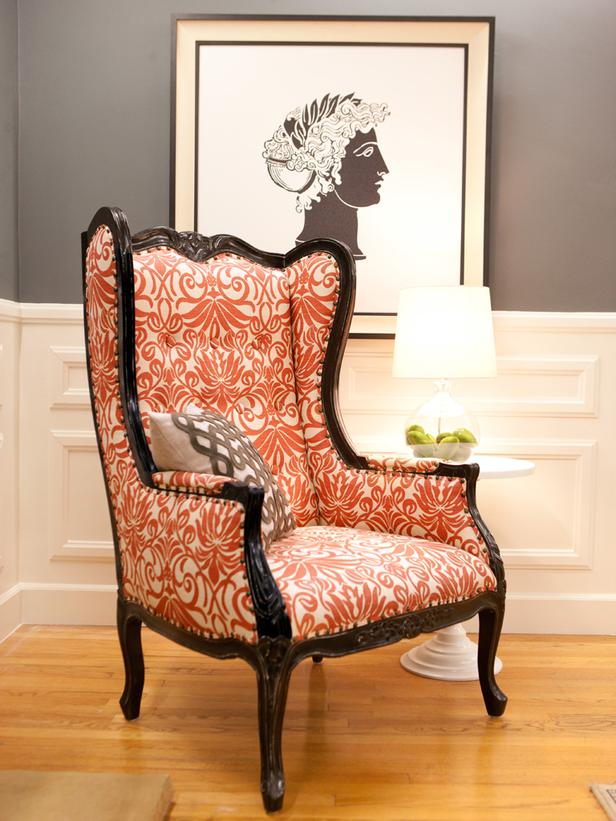 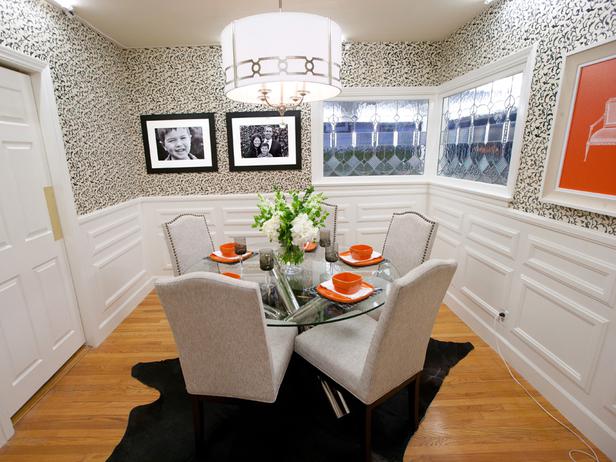 AFTER: Britany's dining room reboot features the portraits she creates for the homeowners. 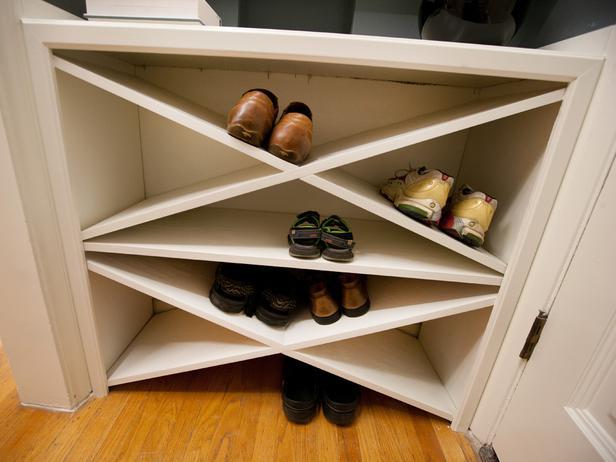 AFTER: Britany incorporates sophisticated-looking shoe storage into the entry.

I’m loving Britany’s shoe storage design but I’m not big on her printed grasscloth wallpaper in the dining room. Season 4 finalist Lonni Paul also used printed grasscloth in Tiffani Thiessen and Brady Smith’s bedroom, so the novelty of that was played out three seasons ago. I know I’m a stickler for repetition on this show, but that wallpaper’s my only criticism. Other than that, I would certainly love to live in the space myself. 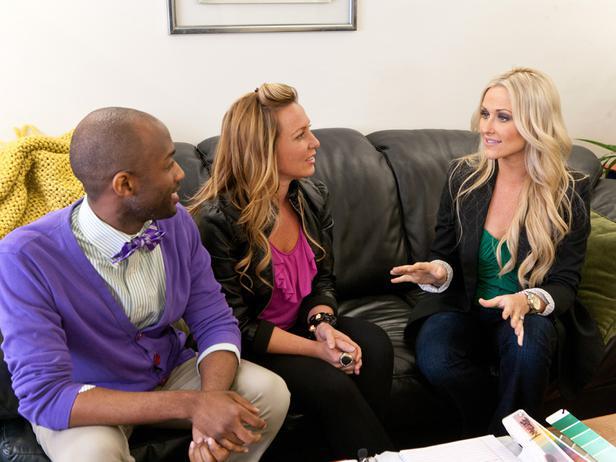 Eliminated finalist Mikel Welch provides a lot of comic relief along the way, proving my point that he’d make a great sidekick on someone’s show.

Danielle has been superbubbly for several episodes and the finale is no exception. She ends up working with homeowners who are creatives–the woman’s an artist and the guy’s a writer/musician. They want Danielle to design rooms that reflect their crazy personalities. DREAM CLIENTS! 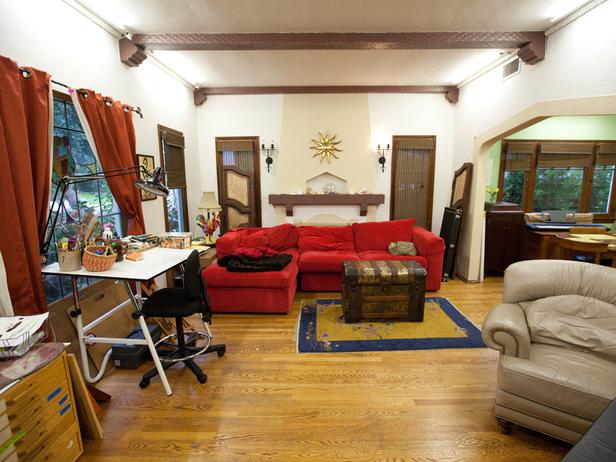 BEFORE: Danielle Colding's set to makeover this living room for her mini-pilot of Shop This Room. 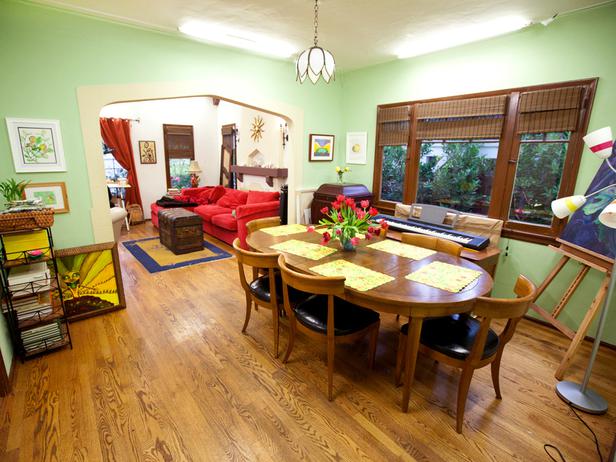 BEFORE: The dining room Danielle will also redesign.

Danielle mainly acts as an editor in the home. She gathers all of the clients’ artwork and creates a gallery wall near the entry. She provides storage solutions that effectively contain all of the requisite art supplies and moves the art studio into the dining room. Although Danielle’s trading a multi-functional living room for a multi-functional dining room, this brings such a world of calm into the entry/living area. More than just decluttering, this change allows the homeowners and their visitors to enter the home in a relaxed manner, no longer bombarded with the chaos of ART STUDIO! BLOCKED ARCHITECTURAL FEATURES! KID CRAP! AAAAAAAGHHHH! the moment they walk into the house. The fireplace is now front and center and highlighted through the use of colorful paint, the furnishings are pared down to essentials, and there’s one amazing chair on display. It’s all working. 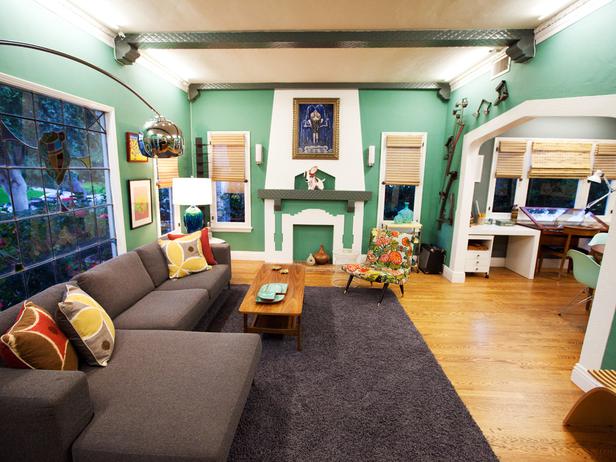 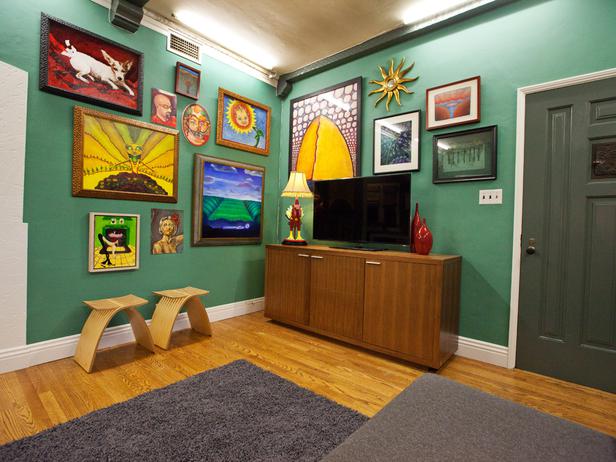 AFTER: The gallery wall Danielle creates for her artist homeowners.

The dining room is a tad on the cramped side, but really, whatchagonnado in LaLa Land where square footage is such a premium? 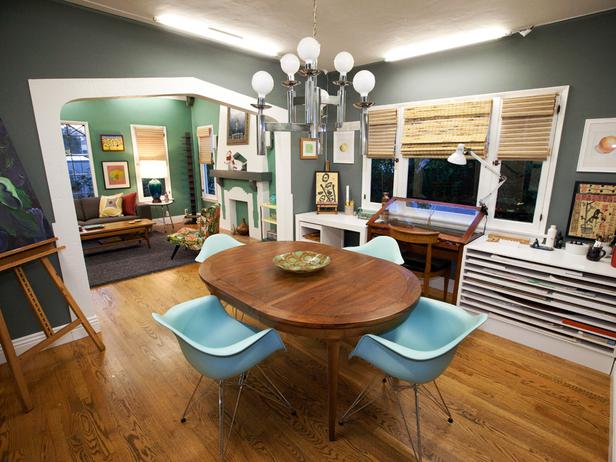 AFTER: The new dining room and artist studio.

Danielle’s great on camera–very polished and perky. Although “Shop This Room” sounds like a great show concept, I don’t really see the connection made in her mini-pilot with the title, other than typical shots of her in stores, which occur in every design show on television. “Shop This Room” sounds like a program that offers bargaining tips or resourcing information, like where to find the best sofas or lighting. “Find a great chair like I did,” isn’t exactly a shopping tip the viewer can do anything with.

Between the two, Britany has the edge for drawing me in as a designer. Danielle is still an enigma to me…I don’t quite have her POV nailed down. I’ll tune in to Shop This Room out of curiosity, but will I remain a viewer after that first look-see? I guess it all depends upon how HGTV packages her and the quality of the staff they build to support their new star. I can say with confidence that I would remain a viewer of Britany’s, simply because her consistent style has me conditioned to a certain level of positive expectation. Danielle, on the other hand, is consistently a nice person and a telegenic TV host, but beyond that, I don’t see her as a powerful designer. 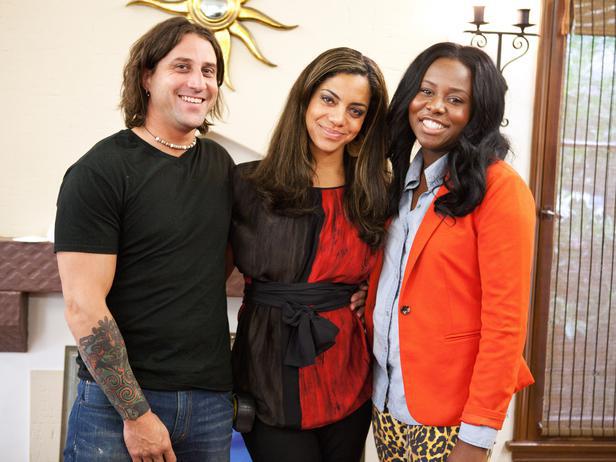 HGTV will air Shop This Room Saturdays at 7pm CST beginning August 4th. Curiously enough, you can already view the before/afters of Danielle’s first episode online. In the meantime, you have mere hours to vote for your favorite Design Star Season 7 finalist to win their own online show!