Yesterday I only ended up with two hours to spend studio-hopping along the E.A.S.T. tour, having promised my bunny-obsessed seven-year old that we would volunteer at a local bunny shelter. That endeavor ended up taking far longer than I had expected. I thought I was going to have to resort to calling the fire department and asking them to bring over the Jaws of Life so I could pry her away from that place. TWO. HUNDRED. BUNNIES.

If you just have a little bit of time on your hands and want to hit the tour, follow my lead and hit some of the bigger studios–one parking stop and you can see a bunch of artists’ work at once.

I decided to hit both Pump Project sites, and it took me right at two hours. One of the features of both of these locations is they have a group exhibit in a centralized location on the premises, allowing you to see one piece from every artist there. Checking this out first is a great way to hone in on whose studios you want to make sure you visit. Even though I had my own handy-dandy “hot list,” experiencing art in person is far different from looking at a photo of a work in a catalog, so this gave me an opportunity to add folks to my list that I’d passed over before.

Austin artist Patricia Chapa wasn’t even in the catalog, and what a great discovery her work was. As I posted on Room Fu’s Facebook wall, all of my Mueller clients need to rush over there with $350 and buy up her silkscreen paintings of the old Mueller Airport air traffic control tower. It’s such an iconic part of the neighborhood and Patricia’s paintings are a modern tribute. She’s done the tower in a few different color combinations, as well as a few with plywood exposed as the background–creating a cloud effect with the woodgrain. I’m telling you, they’re fabulous. She said she can do them in custom colors, so if you don’t respond to the pieces she has on display, you can always commission something special for yourself. I’d like to get one and I don’t even live there. It’s so refreshing to see Austin landmarks that aren’t just the Pennybacker bridge or the old power station. Don’t get me wrong, I’m sentimental about those landmarks too, but this feels like the keepin’-it-weird side of Austin, which I love. 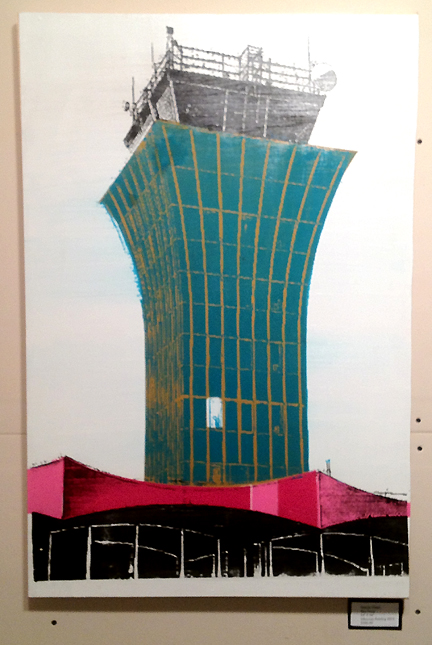 This version is a little more expensive, but well worth the (around $600, if memory serves) pricetag: 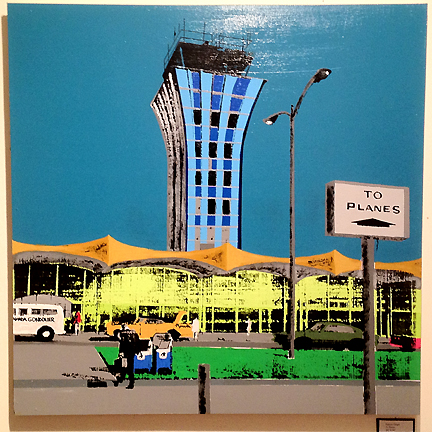 Austin's Mueller airport in its heyday, as depicted by silkscreen artist Patrica Chapa.

I love-love-loved ModPlexi‘s collage pieces, but couldn’t find anyone to grant permission for photos, so you’ll just have to go there and see them for yourself. Superfun stuff and unbeatable prices.

Architect Eva Schone (TROPHYOLOGY) creates the most beautifully designed awards you’ll ever see in your entire life. She’s also showing some pieces that were commissioned by a company to give to their investors as a thank you. All of this may sound boring on paper, but as a former graphic designer, I got so excited looking at Eva’s creations. They’re just smart, modern and incredibly interesting. She’s planning to come out with some desk accessories in the future, which I am really looking forward to seeing. 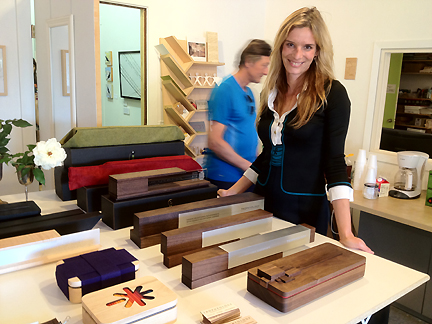 I’ve always been intrigued by MAKEatx–a membership-based design and fabrication workshop here in Austin–but seeing their work in person filled me with oooh’s and ahhhhh’s. They have some really stunning laser cut wood earrings and pendants for sale, as well as intricately cut designs on greeting cards. 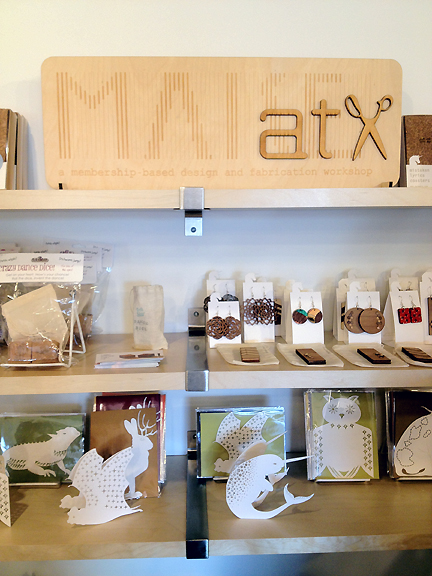 A display of jewelry and greeting cards at the MAKEatx studio.

While talking to the people in the MAKEatx studio, I found out that Women.Build.Design is hosting a tile-making workshop called Play With Clay that sounds like it’d be a total blast. It’s happening November 15th and you can find out details here. She said kids are welcome, so I’m thinking of bringing Phoebe and doing it together.

The work of Brooke Gassiot (#117h on your map) was incredibly intriguing. I wasn’t able to take a photo of her work because she wasn’t there to authorize it, and the photos on her website aren’t very good, so you can only get a sense of what to expect. Trust me, just go check her stuff out. Really cool.

Another artist whose graphic imagery intrigued me was Matt Wester. First off, I noticed a 3D piece in the group exhibit and thought, I should’ve included this guy in my hot-list! It turns out, he wasn’t in the catalog–so another great surprise! (I’ve since updated the hot list to include him.) When I got upstairs and saw the rest of his work and the low prices he was charging for it ($50-$250), I was TOTALLY. ONBOARD. While looking for his website to plug in here (he doesn’t have one, that I can find), I came across this write-up on Austinist that made me appreciate him as a human being even more. 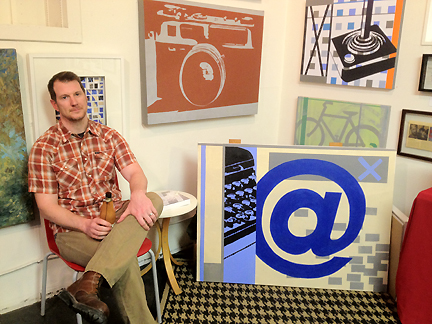 Matt Wester and his graphic-styled paintings at the Pump Project Art Complex.

Kristin Freeman‘s graphic portraits of iconic women are nice and sassy. I’d love to have a grid of them somewhere–maybe Phoebe’s bedroom–but at the very least, I’d like to have her mod Twiggy piece with the houndstooth background:

Erykah Badu, Twiggy and Brigid Bardot are some of the iconic women featured in Kristin Freeman's work.

Tables in the adjoining courtyard are set up with paper and crayons to give kiddos an opportunity to express their own creativity. Obviously, some adults got into the swing, too. 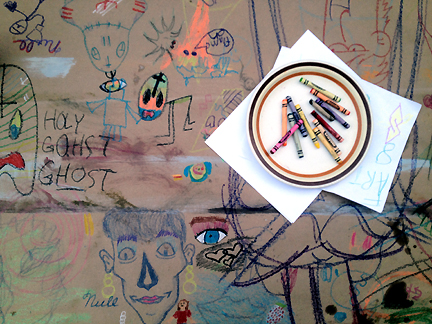