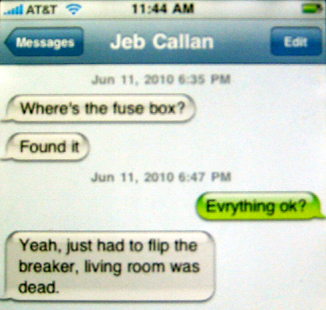 12:40 pm: Call Karen at A-1 Electric, who has handled many, many Room Fu jobs.  Karen says we need to flip the main breaker to the house.  Mysterious disappearance of main breaker, who obviously thinks it’s so important it needs different living quarters from the rest of the breaker panel.
12:41 pm: Jeb locates main breaker on outside of house.  Flips breaker.  Nothing.
12:42 pm: Karen says to turn off all breakers inside, flip main outside, flip all breakers inside except the living room back on.
12:43 pm: Jeb follows directions. House still dead.
1:06 pm: I arrive at my first appointment, late.  Show must go on!
1:30 pm: Karen arrives at Chez Callan.  Tries to isolate main power drains but doesn’t find the problem.  Karen gets everything running somehow, recommends we try changing the breaker.  (Dad’s a genius!) Karen tells Jeb the part number for breaker replacement and gives him explicit step-by-step instructions so he can change the breaker himself to save us some money.

If I had been there I would have paid double to have her change it.  If we do it, chances are good that she’ll be back anyway.

6:00 pm: Jeb arrives with magic part and commences with breaker repair.
6:10 pm: Cursing.
6:20 pm: After a bit of frustrated manhandling of breakers, a triangular piece of black plastic drops in slow-mo to the floor.  Please don’t let that be important, I think.
6:25 pm: Breakers finally fit into their spaces.  Jeb flips living room breaker.

Sparks. “Beep!”  House dead. Why didn’t Karen just change it?  I think it but I don’t say it.  Triumphant wifery on my part.

6:26 pm: Convo with Karen again, who says that since the breaker immediately tripped when Jeb flipped it, this means there’s a potential short in something very near to the breaker box.  If it were something in the back of the house, it would’ve taken another second or two to trip, since it would’ve taken longer for the electricity to travel around back.  She suggests we turn off the garage light and our front outdoor lights, flip the breaker again and see what happens.
6:27 pm: We do the thing with the porch lights and the garage light off.

10:45 am: Breaker trips.  “Beep!”  House dead.  Garage and porch lights not the problem.  The only thing currently draining any power from the living room is one 13-watt CFL and our TV/stereo receiver/cable box.

No-o-o-o-o-o-o-o-o!  It cannot be the TV or the cable box.  I have to watch Design Star tonight!  How in the H am I going to interview the first castoff tomorrow or write my episode review if I can’t watch the show?  Must find Plan B viewing option! 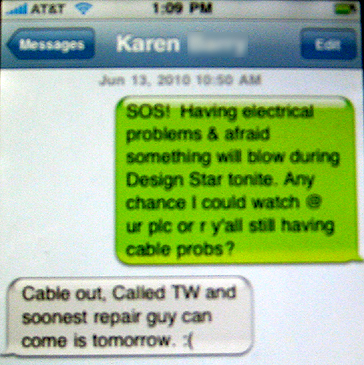 Austin, being the early adopter town that it is, has a growing number of its population giving cable the boot and using Hulu instead, including four people on my shortlist.  HGTV does not traditionally air its programming immediately on Hulu.  Am I screwed? 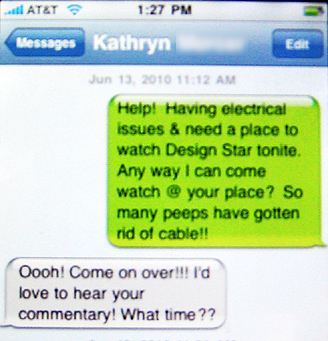