Is that cute John Gidding playing guest judge on Design Star tonight?  Wake me when he comes back onscreen. 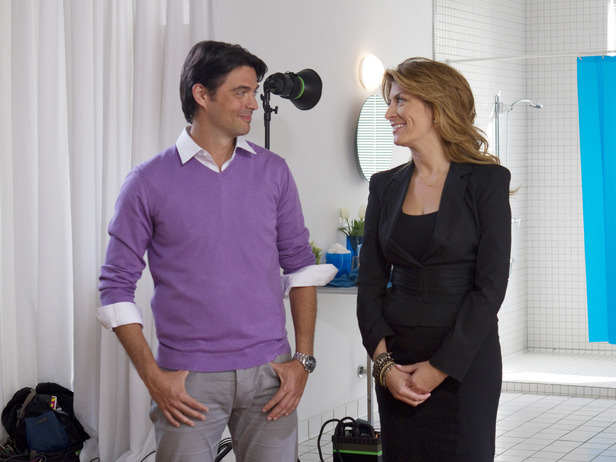 CHALLENGE: Design a kitchen for a Sears catalog cover in two days, featuring Kenmore appliances.  Inspiration comes in the form of regional food baskets, with each designer selecting some kind of beige food item.

Oh Lord, what a boring episode of Design Star that was last night.  This time I blame economics and the sweet cash infusion that is product placement for the snore.  After all, you can be the greatest, most innovative designer in the world, but you are still going to have to churn out a lowest-common-denominator style of kitchen if it’s going to be slapped on the cover of a Sears catalog. You’re not going to get away with eye-popping color drama like you can if you are shooting for IKEA.  You’re not incorporating sleek Euro-style cabinets or technicolor Aga ranges or some kind of funky retro fridge.  Anything cool or unique is immediately tossed out the window of opportunity because Sears is not a rock-the-design-boat, blow-out-the-stops kind of company.  It’s not what they are, it’s not what they do.  Consequently, we have two white/beige kitchens that would never fall into the category of Wow.  The closest thing we get to Wow is the (blue? purple? purple-y-blue?) island the Red Team incorporates into the mix, and the revelation that finalist Courtland Bascon is S-T-R-A-I-G-H-T.

Gay boys the world over are scratching their heads and checking the functionality of their gaydar.

It’s so ironic that this season’s kitchen challenge features the support of professional flooring, appliance, and cabinetry installers for a faux kitchen, whereas real-life homeowners of kitchen challenges past were subjected to vent hoods hanging by a thread,  unfinished tile backsplashes, and incomplete remodels.  While I applaud this type of assistance, it’s a buzzkill that–because of the Sears aspect–this season’s designers aren’t able to capitalize on this break by doing more innovative design plans. 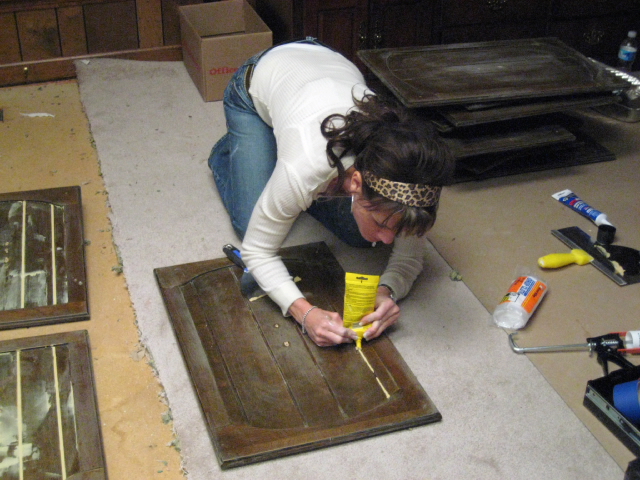 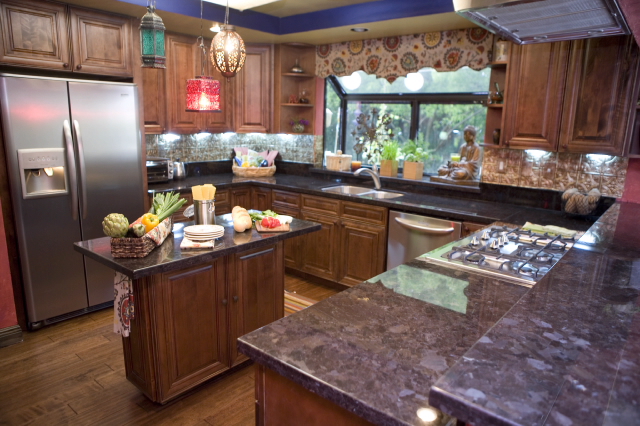 According to Season 4 finalist Jason Champion, this kitchen's vent hood was hanging on with a wing and a prayer. 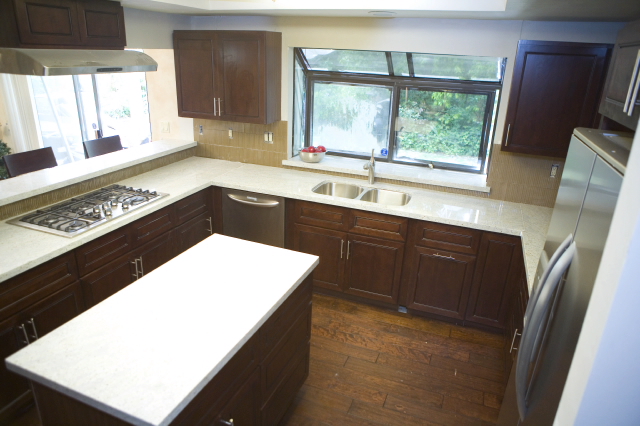 The tile backsplash in this Season 4 kitchen was still ungrouted when time was called. 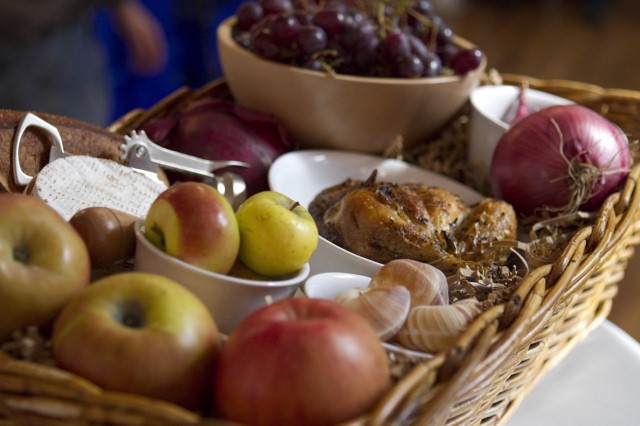 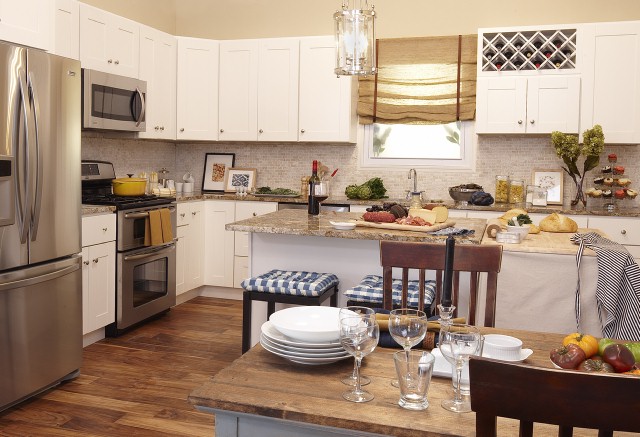 Michael says he chooses the escargots because, “I like the idea of this rustic encasing having a real luxury good inside of it.”  If anything ever happens to Michael’s design career, he has a promising future in PR.  No one spins the BS more eloquently than Michael when it comes to each week’s individual inspiration selections!  Casey goes with the baguette and Alex selects the corkscrew.  Right away the background music changes to that Tweedledum kind of thing and Michael starts bitching about how Alex should’ve chosen something more like his and Casey’s more rustic items, even though rustic + sleek/modern = great juxtaposition & current design trend.  We’re not even five minutes in and we know who’s going home tonight.

The Blue Team bullies Alex into submission, ignoring his input and relegating him to construction labor.  Alex is still wet behind the ears in terms of experience, but he’s been an integral part of his team during the previous two challenges, so there’s no reason to outright dismiss him.  Casey, having won two of the last three challenges, oddly follows Michael’s lead instead of taking on a leadership role herself.

Alex decides that the stainless steel appliances are all he needs to reflect his inspiration, which he chalks up to being all about functionality.  While he should definitely push it further, is there any way in the world he would be able to bring out other corkscrew-inspired elements, with Michael and Casey putting the kibosh on his every suggestion? 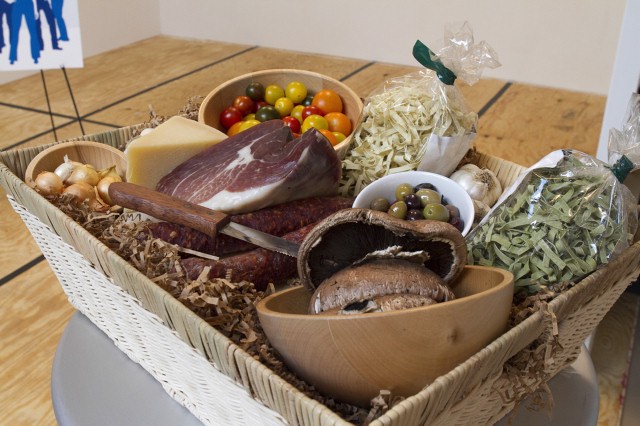 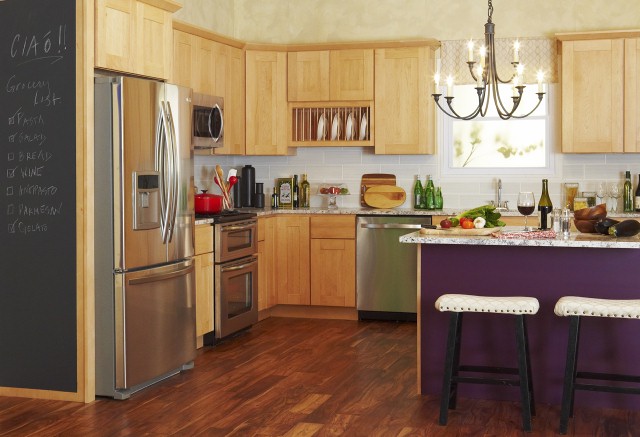 The Red Team embodies teamwork, because both Emily and Courtland have clearly defined roles based on their individual professional expertise: Courtland is the kitchen planner and parmesan cheese faux finisher, Emily is the stylist, natch.

Emily is set up to fail, because isn’t that what America wants to see?  A professional prop stylist failing the prop styling challenge?  I’m not buying it.  As a former art director, if I’m picking a catalog cover and it’s a choice between the two final images above, it’s not even a close contest.  It all comes down to composition and selling the product.  The Red Team’s kitchen design accomplishes both of these objectives better, and I also think they make superior material selections to boot.  The Red Team’s overall design is warmer, the Blue Team’s kitchen looks too sterile.  If you look at the way both teams break up their cabinetry composition, the Red Team’s choice of plate rack in the middle of the frame keeps your eye focused on the area where the appliances are, rather than moving off target.  Conversely, the wine rack in the Blue Team’s kitchen draws your eye away from the appliances—a huge no-no for this particular catalog cover.  The Blue Team’s pendant light selection is wonky—it either needs a mate or it belongs in an entry.   The Blue Team’s dishwasher is obscured, whereas the Red Team (that is, Emily) adjusts their island to reveal the dishwasher in their shot—again, this shoot is all about selling appliances, so why don’t the judges comment on this?  Although Emily would benefit from editing her props in the Red Team’s kitchen, her styling at least tells a story that makes sense.  Judge Genevieve Gorder echoes the mystified reaction of anyone looking at the Blue Team’s kitchen: “Can you explain to me this story, if on my countertop I have cupcakes, hydrangeas, mussels, artichokes, wine, herbs, fabric…what am I doing?”

As if the kitchens aren’t boring enough, Michael bores me with more of his superior attitude.  “Casey and I were running in there and moving things,” he whines, “and Alex all of a sudden starts putting his two cents in.”  As if he is part of your team, Michael?  Gasp—clutch pearls! How dare he!

What a condescending asshole-y thing to say.

Michael digs his hole deeper.  “Alex is a good pair of hands, but in terms of a great designer, I have yet to see it.”

Well, Michael, we haven’t seen you do anything crazy spectacular on the show yet either, so put your money where your loud mouth is and we’ll grant you more cred.

“We saw your French bread inspiration in the rugged textures and aged finishes of your kitchen,” Judge Vern Yip explains, “and that really came through in your team photo.”

I guess you could say that Casey is the breadwinner this week. Ba-dum-bum.

Casey goes back to the apartment while the other designers create hosting presentations, and calls her husband.

Previous contestants were put under lockdown and weren’t even able to bring photos of their babies, but Casey gets to call her hubby to tell him she’s in the final four?  It is awesome to see this thawing of quarantine rules, but I can’t help thinking there’s a bigger reason why the producers would air this convo.  It isn’t really a compelling conversation and it doesn’t help move the story along…it does, however, help humanize and flesh out this particular contestant on the show.  Which might be important to a network who wants to lay the groundwork for the public image of this year’s winning designer.

IN THE BOTTOM: Alex & Emily are selected as the bottom two designers.  Ultimately, Alex is sent home.

Next up: My interview with castoff Alex Sanchez!