As I’ve been transcribing yesterday’s interview with Design Star Season 4 winner Antonio Ballatore, I’m having the hardest time not spelling out his dialogue phonetically.  Between his New Yawk accent and my Texas Twang, this is one crazy audio file.  Even though a birdie told me he was feeling a little rough after a night of celebrating, it was “def’nitely” a fun chat.

Other contestants have said they thought you’d been cherry-picked all along as the winner.  Did you feel that way? Maybe they feel like that…I personally don’t think so, because I felt like I was really working hard.  I completed every single challenge.  I worked as hard, if not harder, than anybody else there.  I did all the same challenges.  I was under the same time constraints as everybody else.  I pushed it more than anybody else.  It is what it is—they can think what they want to think.

Is there anyone from this season’s cast that you’d bring on as a sidekick or for a guest appearance? I had a LOT of fun with Jason (Champion).  He kept me laughing through all those projects.  We bonded over the cabinet situation.  I think we’re gonna be friends for a long time and I’d love to bring him in.  I loved the kind of interaction we had together.  We were like total opposites but we worked pretty good together.  We had fun.  He called me this morning and congratulated me.  He’s a sweetheart.

How cute. They even have matching headbands!

Who would you like to see win the online show? Either Jason or Jany (Lee).  I really liked Jany—she was supercool.  I think she didn’t really get to show who she was, she didn’t have a chance.  Jason could definitely rock his own online show and more.  Those two, I think, would be awesome.  (Vote for your favorite now!) 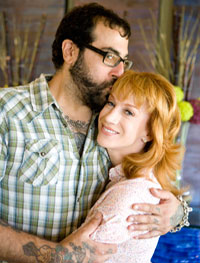 Let me tell you something, Kathy Griffin has the hots for every guy! Aww, you just ruined it for me!  Thought I was special!  It was fun—we were just raggin’ on each other.  I love bustin’ chops.  I can take it and I can receive it and I can have fun with it.  It was great to lighten up like that, to have her for a client and working together.  It was fun.

I’ll bet.  She’s “no holds barred” and so are you, so it was a good mix. There were a couple takes of me at the beginning—she wouldn’t let me come in the house at first!  That got edited out.

There were many times throughout group challenges where you put your foot down about something that your teammates didn’t want but you were right in the end.  Did your teammates ever give you a pat on the back when it was over and admit you you were right? Let me tell you about that.   From day one, just me walking in there, they expected something different.  Every time I wanted to push the design a little bit, it was always a struggle.  As the competition went on, I felt like more and more, everything was just getting watered down and turned into these lame designs.  I felt I had to put my foot down on a couple of things—with the tan, with the ducks—it was just like, my voice wasn’t getting heard.  Everybody just wanted me to build everything and were expecting me to build stuff but not have any input.  I had to put my foot down, especially with the tan.  Goin’ home a proud American!  Everything on the base was tan.  We walked into a tan room, tan couch–the neighbors were tan, the house was tan—everything was tan!  I had to do it, I couldn’t let that happen.  (The neighbors were tan–you’re killing me!)

Fans of the show either love you or hate you.  How do you deal with the negative people? I’ve gotta stop reading the blogs!  (Except Fu For Thought–it’s my favorite.) Now that it’s over, I can’t read it anymore!  People are so mean!  Why are they so mean? (Laughing.) What did I ever do to get everybody so riled up?!  People are used to a certain kind of thing and I’m trying to bring a little something different…be myself and have fun with it.  Just push design a little bit.  As far as all the haters, hopefully they’ll give me another chance.  Hopefully they’ll start getting into it.  (Considering what I wrote about him before the show aired, no one’s more surprised than me at how big a convert I am.)

You said you came from a family of artists.  Can you tell me about them? My mother and father are both painters and designers.  My father did a lot of textile design back in the ‘60s and was also a visual director, doing windows for Henri Bendel, Tiffany’s, Macy’s, A&S—everything.  I grew up in my dad’s studio, sweeping up at first.  I had a little section where I did my artwork.  Growing up, I would help him and learn how to do all these sets and window displays and visuals and all that.  I didn’t even plan to get into design.  I played music my whole life.  I thought I was gonna be a rock star by now!  But I’ll take Design Star—it’s just as cool, I guess!

Some of Antonio’s work doing set and prop design: 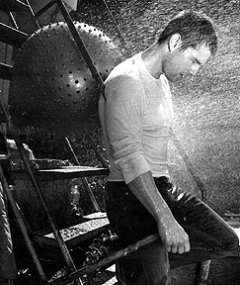 Tell me more about the music stuff. The last big band I toured with was called Murphy’s Law. They’re a New York hardcore band and have been around forever.  They actually started out with the Beastie Boys.  I toured and played with a lot of New York bands.  It was one of those things where it would get so far and then something tragic would happen.  The singer would flip out or something would happen.  After a while, I just couldn’t take it anymore.  I was touring with six guys in one van, sleeping on a hotel floor for three weeks at a time.  It lost its fun after a while.

Then you were uniquely qualified for the living conditions of this show! Yeah, I was getting flashbacks, for sure!  It was almost the same, except there were no cheering fans at the end of the night!  It was just right back to the same grind.

So what did you play? I played bass guitar.

Much ado has been made of your tattoos.  Do you have a favorite tattoo artist? All my tattoos come from all over the country, all over the world.  I got some in Japan.  To me, getting tattooed is about what I’m going through at the time.  I have so many people that I’m friends with who tattoo, it’s hard to narrow it down.  There’s so many talented people.  I know I’d like to get a tattoo by Kat Von D (TLC’s L.A. Ink babe)—I think she’s one of the best tattoo artists going right now.  I’ve actually got a couple of friends over there—we’re trying to work on it now.  She’s hard to get an appointment with.

The Antonio Project—is that just a special, or is that something you’re going to build a show around? It’s a one-off special, just to recap the season and to give a little peek inside my life and get me all wrapped up.  When I was away on the show, I had bought this house that was in really bad shape.  It was really run-down.  When I came home from Design Star, I went right into another construction scene.  In order for me to keep going and do other people’s designs and do my thing, I had to straighten out my life first.

What an awesome opportunity, to just knock it out really fast. It was pretty rough—I thought my Design Star challenges were over and this was like one extra challenge.

Did you get to pick your construction crew or work with any of the guys who helped you on the final challenge? That’s what’s funny.  One of the guys on my crew was one of Dan’s crew guys.  I kept my eye on him—I was worried about him at first but he was cool.  I didn’t know if Dan sent him in or what.  Then I brought in a lot of my close friends that I’ve worked with over the years, like my one friend Jake, who’s also a set/prop designer.  He helped me a lot with the paint.  Brought in some low-rider guys I know who do cars, some metal sculpture dudes.  I used a bunch of my friends to help me out and they all pulled through and did some really great stuff for me.  It was definitely fun.

I have one last question.  Who would win in a fight between you and Steve Watson? Aww, that’s a silly question.  Me, of course.  What, are you trying to cause some problems for me with Steve Watson now?  He’s a cool dude.  I used to love his show, Monster House.  He was there in the beginning—he’s been around for a while, so I’ve got respect for him.  He’s definitely a cool guy.

Catch more of Antonio this Sunday night on HGTV. The Antonio Project airs at 10 pm EST.

SO.  Now that this season of Design Star has concluded, what can you expect here at Fu For Thought?  Well, a lot, actually.  I’m working on scoring an interview with Kathy Griffin (!!), to see what she and Team Griffin really thought of Antonio’s design.  She’s busy with her promo tour for Official Book Club Selection (the forward to Oprah alone almost made me pee my pants), but it’s looking good–so fingers crossed!  Thanks to Jason Champion, I’ll be talking with Eddie Ross soon.  Eddie was on the last season of Top Design.  We’ll compare and contrast Top Design vs. Design Star, which I’m hoping gets really dishy!  And the great people who gave me this opportunity in the first place have offered to set up interviews with anyone at HGTV that I’d like to speak to!  So keep coming back for more of that, plus all of the steals and deals on home decor products you’ve come to expect here at Fu For Thought!