This season of The Apprentice continues, opening this episode at the living quarters, where the top 6 from last episode kick back with adult bevs, speculating about who they think the judges will send home.  Cue the shock and awe as the returning contestants arrive and reveal the sad sack who doesn’t make the cut.

CHALLENGE: Design a one-bedroom apartment based on outfits selected at Design Star’s first runway show, making sure that each individual team member’s fashion inspiration is incorporated into the overall design.

BUDGET: Budget’s not playing a key role in this challenge, with product placements running amok.  Thank gawd, too.  I’d much rather see the designers making their selections at Bo Concept, Gracious Home, and Zarin Fabrics (made famous by The Real Housewives of New York) than friggin’ Sears.

BONUS: Audrey Slater, fashion director at Redbook Magazine, will play guest judge, and the winning design will be featured in an upcoming issue of Redbook.  It’s about time there are some media tie-ins for the winner(s), something that is de rigueur for other reality show competitions.

BONUS BONUS: Jambi’s secret word of the day is “infuse.” Every time someone says a form of the word “infuse,” take a drink!*

I have a bad taste in my mouth after watching this episode.  Not only is there more fugly than there oughtta be in the final two rooms, but I’m so not onboard with the outcome.  The wrong person gets the boot.  Again. 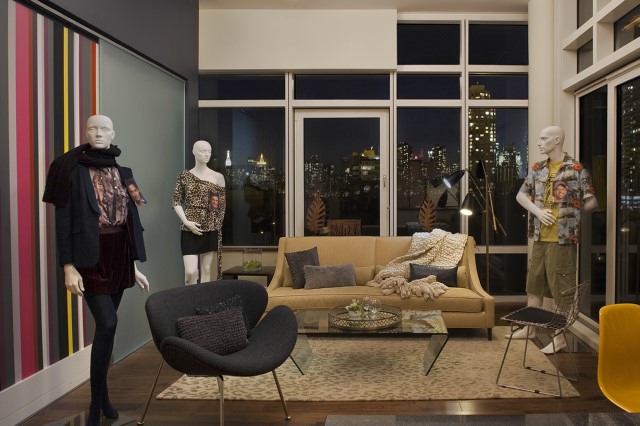 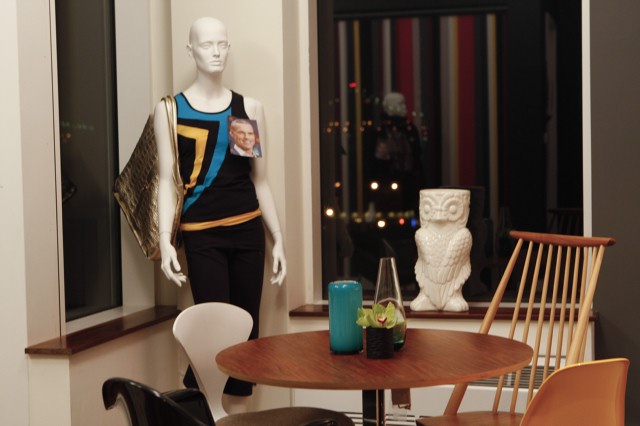 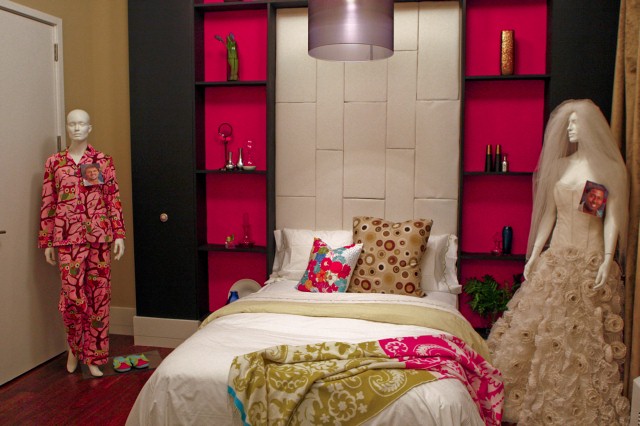 Tom is the only one to really get the challenge right on the men’s team.  Choosing yoga wear as his inspiration because of its simplicity, Tom says, “I can make this work with classic, modern furniture and sharp, contoured lines.”  And he does just that.  His dining space features the bold shapes and colors of his outfit in a fun and sporty way.  I don’t see anyone else represented as well in the space.  In and of itself, Courtland’s concept of a striped wall incorporating colors from everyone’s outfit is fun and is executed well, but it feels completely out of place in the room.  As for the suit that is supposed to be his inspiration, where is that in the apartment?  One wool-covered chair?  Weak.  Michael talks a big game, dogging Trent for interpreting his Tommy Bahama outfit so literally…and then turns around and selects a leopard-print rug and calls it a day for his inspiration.  If that’s not literal, Michael, what is?  Alex ignores all of the potential of his wedding gown inspiration and only brings its color into the space.  Which will be really ironic when we get to the end of the episode.  I’m not sure where Trent is in this room other than three leafy wood objets d’art that bitchy Michael won’t even let him style himself.  Dan’s inspirational contribution to the room comes out in a garish shade of hot pink paint and one little pillow on the bed.   I’m having trouble processing how six designers can take the most expensive inspirational fashions and high-end merchandise from the likes of Bo Concept, Gracious Home, and Zarin Fabrics, and create an interior design that looks as cheap as Season 4’s abysmal Sears merch. 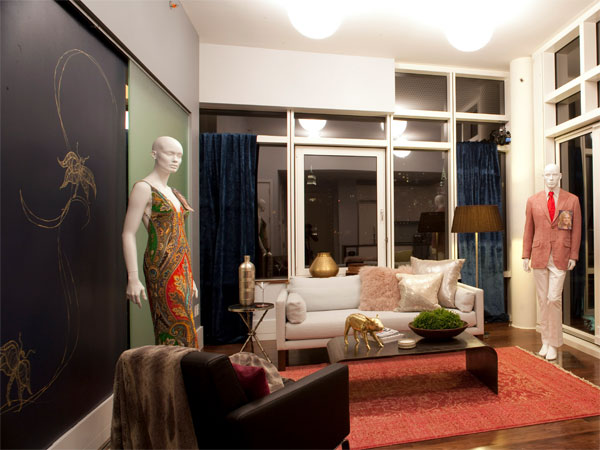 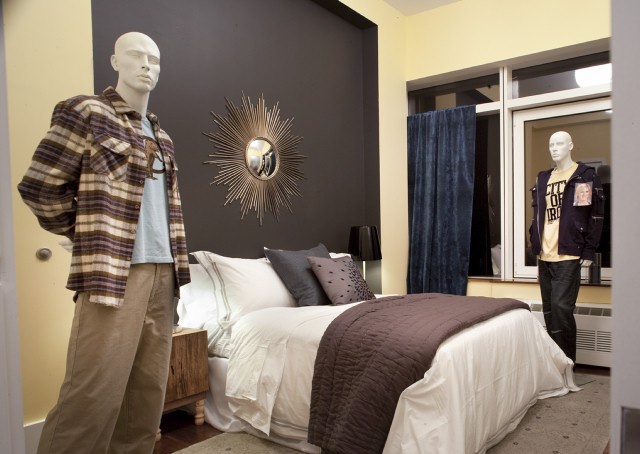 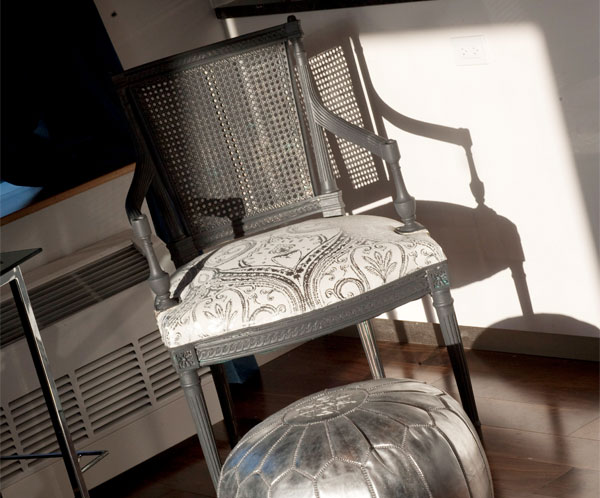 It’s all Nina, all the time, for the women’s team.  Nina has an idea for the design of the apartment.  Nina wants to paint a mural in the living room.  Nina wants the pink rug.  Nina has to have the pink rug because Nina wants the pink rug.  Nina does more shopping with Tera, even though she has a whole mural to paint.  Nina’s a bitch.  Nina’s a bully. Nina, Nina, Nina! I’m as drained by her as Courtland is, and she doesn’t even follow up her fashion house bragging rights with anything interesting.  When she says she wants to paint a mural inspired by her dress, I expect something intricately detailed and colorful, not a couple of mehndi-looking yellow flowers on a blue wall and a sequin pillow.  And I don’t know about y’all, but I sho’ don’t look at that dress and think, “gold pig.”  Stacey paints a chair.  And paints it and paints it and paints it.  We’re literally watching paint dry, and…it’s gray paint.  Has Lilly Pulitzer ever designed a gray thing in her whole damn life?  Isn’t punchy color her whole designer raison d’ètre?  Stacey says her tie-in to her beach cover-up is “the wicker.”  Except there’s no wicker on the dang chair.  Casey picks out some wood cubes and that’s about it.  Emily’s suit is represented by tailored furniture, and annoyingly, by Nina’s rug choice.  Tera picks out a creamy yellow paint and some superfugly royal blue curtains to represent her outfit.  Her team fights her every step of the way on the yellow—and I personally would only paint the bedroom of a baby or a morning person with yellow—but in the end the yellow is not oh-my-gawd-fire-her kind of yellow.  Those royal-blue-Boca-Raton-crushed-velvet-track-suit curtain panels?  Different story. 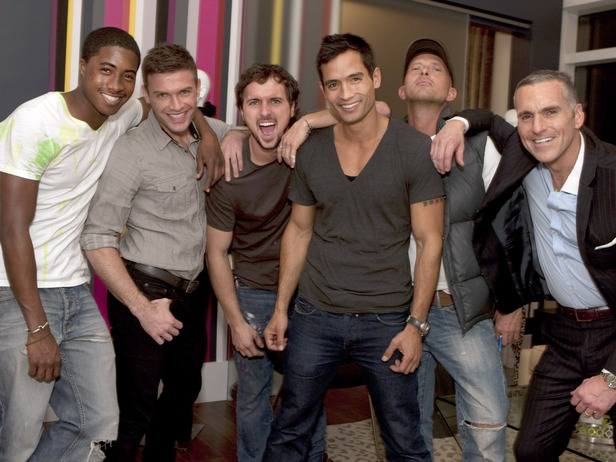 WINNING TEAM: The Dudes. “You guys had a lot of really disparate styles and you managed to infuse* them in a really effortless fashion into your room,” claims VernBot.  “It was beautiful, it was elegant.  I was inspired.”  Big talk about an apartment that screams “hodgepodge.”  I personally feel the women’s apartment design is more cohesive.

OVERALL WINNER: Courtland. Did I miss the random drawing?  Was there some scene where VernBot’s huddled in a back room with the Candice and Genevieve ‘bots, calculating numerical algorithms to determine a winner?  Tom, you are robbed, but at least you are redeemed after last week’s Red Light District Debacle.

The Dames are all given camera crews and charged with doing on-camera presentations of their losing apartment.  Which confuses the holy hell out of me.  If HGTV is looking for the next David Bromstad, shouldn’t the top 6 make videos to determine who the overall winner is?  Shouldn’t the winner(s) be groomed for their supposed future TV timeslot with more on-air time and hosting practice?

About Tera’s color selections: “It’s not about matching (your inspirational outfit)—this isn’t Garanimals.  This is about understanding what the emotion is about that garment, then infuse* it and incorporate it into the space.”

When Tera explains that she went big with the yellow because “everything’s bigger in Texas,” VernBot says:  “That yellow was big like Big-Bird-big, not urban-chic-cool big.”

About the basket of spilled-out fabric that somehow Emily is blamed for: “But Emily, c’mon.  That insane piece of fabric crawling out of that that sad, sorry basket?  A basket that people stuff extra toilet paper rolls in, in their guest bathroom?

Candice thinks Casey’s contributions could use more plaid.  This is called reaching.  If Casey had used plaid anywhere, she would be busted for being too literal.

Tera leans over and blows pint-sized Stacey under the bus, forcing Stacey to admit that she spent an entire day working on one chair.  VernBot doesn’t know from Lilly Pulitzer and gives wee Stacey a pass.  She doesn’t even rate bottom two!

Roll the videos and you have an approachable, telegenic Tera versus Nina, whose pinched expressions and Judge Judy delivery don’t put the “home” or “garden” into HGTV.

And yet the judges choose Nina to stay in the competition.

Season 4 veteran NataLee Callahan points out on her blog, “the prize is a TV show of your own.  You have to be likable to have a viewing audience…however, to win this show with its current set up, you have to be kind of mean and play dirty.”

The fact is, every designer I ever see on my teevee has some kind of fan base.  Even though last season’s winner, Antonio Ballatore, is incredibly polarizing among HGTV viewers, he’s able to stay in the game because of his loud and loyal following. (And we anxiously await the return of The Antonio Project on August 8th!) Antonio inspires his fans because he’s always pushing the envelope.  Nina’s just pushy.  I can’t imagine how they can possibly work that into a show.

If I thought the women’s team really lost this challenge, I would keep Tera this week and send Stacey back to Chicago.  The sunburst mirror over the bed pays homage to the zippers on Tera’s outfit, and I don’t think it’s so terrible to use the T-shirt color for the walls.  It seems a bigger crime to take Lilly Pulitzer to the dark side and to not know what wicker is.  Besides, Tera should get a bit more slack after designing one of the better rooms last week.

Here’s how everything would shake out from my vantage point:

Winning team?  The Dames.  Overall winner?  Hmmm, good point.  No real standouts individually, I just think their apartment is much more chic and sophisticated than the dudes’ apartment.  Here is where on-camera hosting presentations should come into play—to determine the winner! Losing team?  Dudes.  Bottom two?  How about bottom five?  The one to send home?  Trent’s shady flat-brim ball cap collection, which should not be allowed on the show in the first place.

Curious about the Redbook issue featuring the winning design?  Looks like it’ll run in the August 2010 issue.