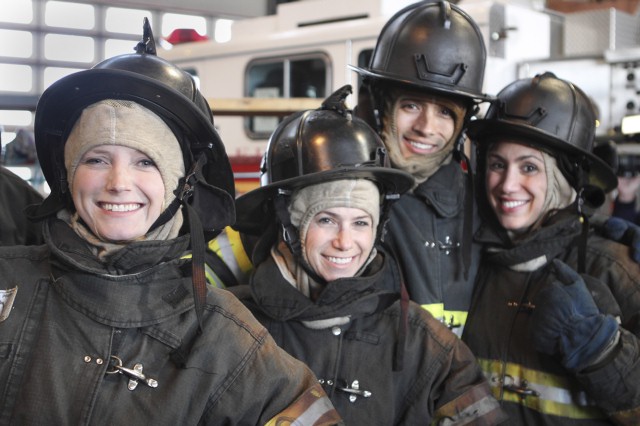 THE CHALLENGE: Design a common space for real firefighters in a real firehouse.  Each designer must incorporate one signature element into the team design.  But first, step into this flame-retardant outfit and let us torch you for television!

Now THIS is the Mark Burnett spin on Design Star we’ve all been waiting for! 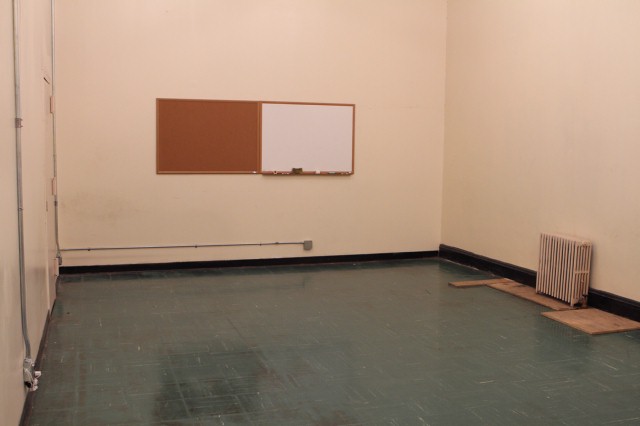 The blue team's room, before the makeover. 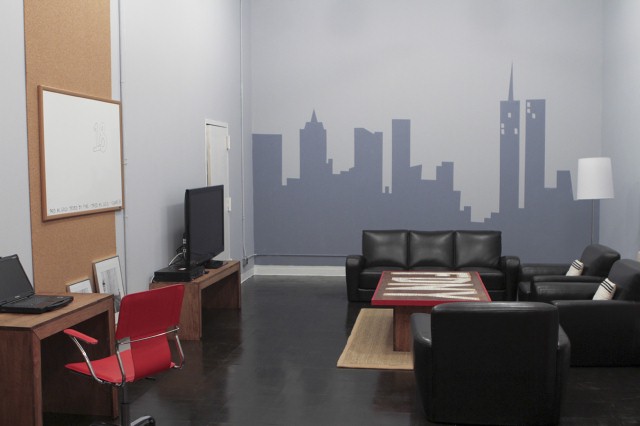 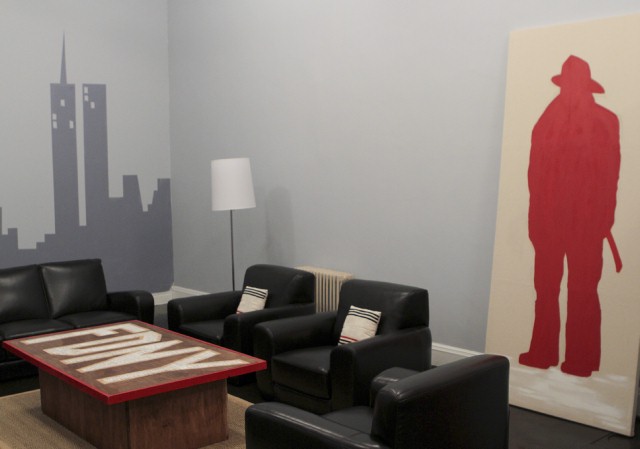 No surprise, Michael is bitchy again this week.  “Everyone who has worked with Alex is saying, ‘Why is he here?’” Michael confesses.  “He doesn’t bring a lot of design to the table.  I don’t need snoozers.  I need strong team members.”  We all have our needs, Michael.  Alex needs a teammate who doesn’t haul off and shoot himself in the thumb with a nail gun and Courtland just needs to nail you.  (But that is sooooo last episode, because this week Courtland reveals that he is very, very manly.  He’s a man’s man!)  Alex not only constructs Michael’s desk-slash-TV-stand, but also paints a—gasp!—mural on the wall.  A mural!  How very unusual for this season! Except Alex’s mural actually works in this situation because its simple, graphic style coordinates with Casey’s art piece featuring the silhouette of a fireman and Emily’s FDNY-themed coffee table.   They put together a room that is equal parts fun, touching and cohesive, albeit a tad on the stark side.  The unfortunate combination of supershiny black leather furniture, a lack of natural lighting, and the total absence of plant life does not do them any favors in the warmth department.  I’d also love to see them bring in something that reflects the historical nature of the neighborhood and the building. 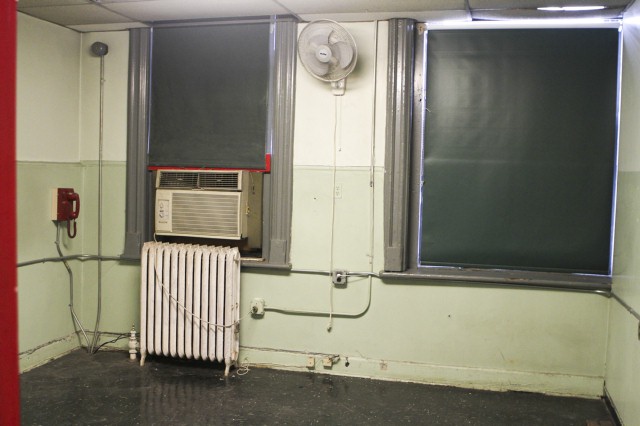 The red team's "man cave," before the makeover. 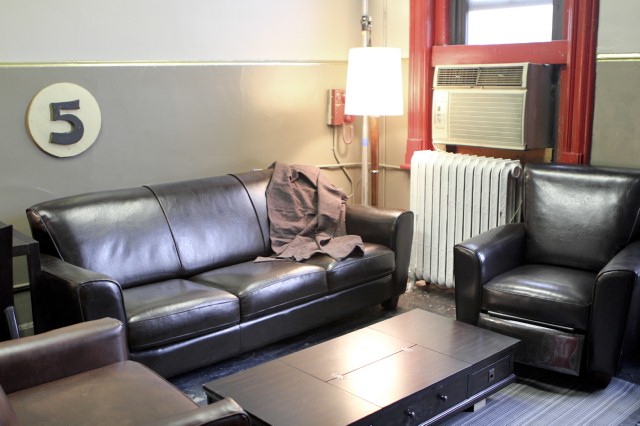 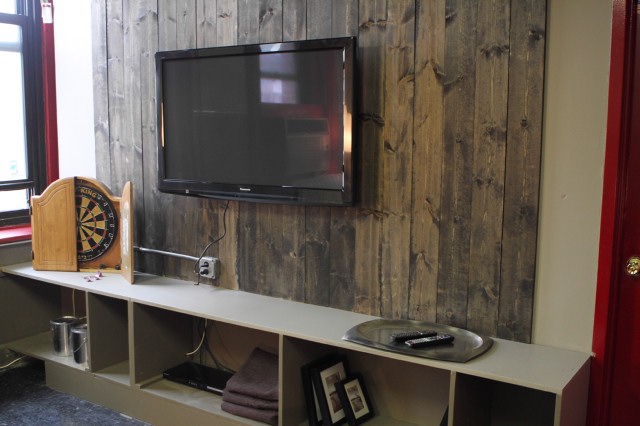 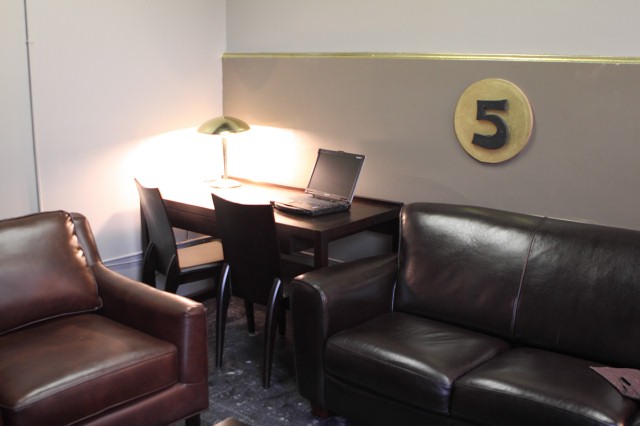 Stacey adds a brass desk lamp to the equation, inspired by a fireman's pole. 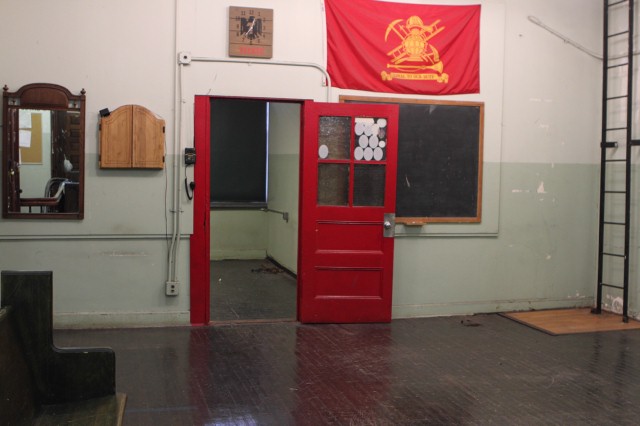 The red team's workout room, before the makeover. 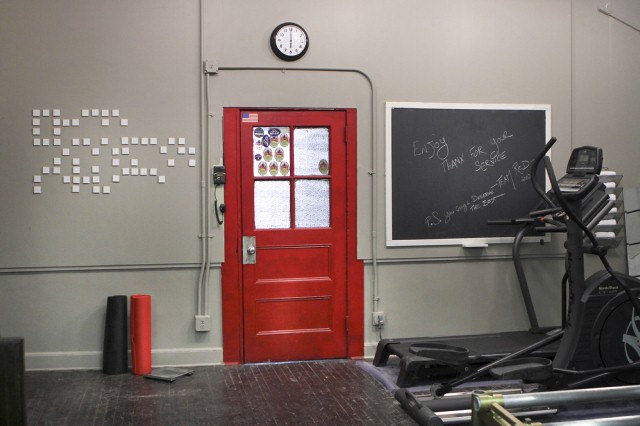 Nina wants to make a space for firefighters to come back to that says, “You made it through another day!” She’s thinking “spa” and “Braille mural,” because nothing says, “pride, commitment and service” like a facial and Braille made out of cork.  You’d have to be blind not to see it! To Courtland’s utter horror, Tom wants to start tearing down walls, but settles for eliminating acoustic tiles to expose the building’s original tin ceiling.  This is all well and good until we see that the grid for the dropped ceiling stays, presumably to support the fugly fluorescents dangling below the tin.  Tom paints the ceiling the “goth mosh pit” color of black, which–judge Candice Olson implies–provokes the emotional response of death.  Despite thinking she “knew exactly what they wanted,” Nina orders furniture out of scale with the room, including the tease of a recliner that doesn’t have enough clearance space to recline.  “I truly believe my design idea is the best,” she continues.  “I’m better than the group and they can learn from me.”

Oh good grief.  Does she ever stop with the self-aggrandizement?

Stacey decides to play up the Engine Company #5 thing and makes a wooden plaque with a “5” on it.  That is, Stacey talks about it, but when it comes to the actual cutting out of the number and the painting and assembling of the plaque, Courtland is the dude with the saw, paintbrush and the glue.  It’s a dumpy little kindergarten crafts thing that would’ve stolen the show if it’d had some scale to it.  Vern likes it and wants to marry it, so the kid stays in the picture!  Courtland also fashions an entertainment center from what looks like the charred remains of a burned-out building.  The pine paneling thing didn’t work last season and it doesn’t work this season…but it positively reeks of Courtland’s masculinity! Stacey puts her elitist foot in her mouth, saying Nina’s Braille cork extravaganza is “something that is for, like, intellectuals in a downtown gallery. Not fire company 5 on the Lower East Side.”  Like, because they’re too stupid to, like, “get” art, Stacey? 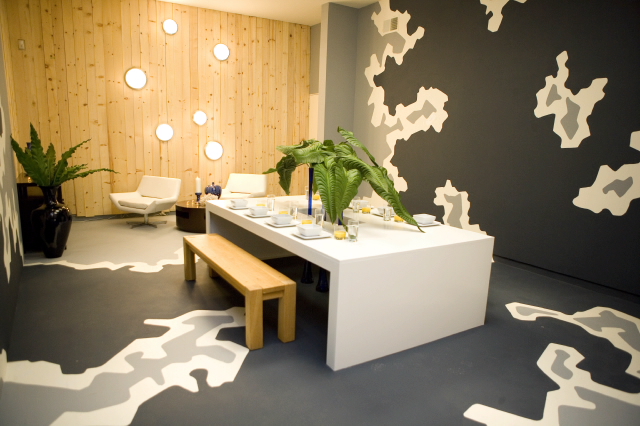 In the end, the red team’s designs still feel very institutional.  There’s no wow factor anywhere and there’s absolutely no sense of transformation.  The floors could have at least used a good scrubbing.  The workout room doesn’t look like anything changed other than the appearance of a lot of equipment shoved into the space.

Vern tells the red team, “The reason you’re standing here today is that we felt like you turned in a big, fat zero.  When we walked through that space, we were so angry.  I have not been that disappointed in so long.  I don’t know how that much talent comes together collectively and produces that.”

“Give them a space that calms the visual chaos,” Candice points out.  “Don’t add to it.”

Courtland wants to apologize to each and every one of the judges.  Which is just weird and brown noser-y.

Cue the video reels and Courtland is so uncomfortable watching himself on camera that I feel every ounce of his dread and embarrassment. Nina’s presentation is very Nina-y.  I’m an artist! But this is not Work of Art: The Next Great Artist, this is Design Star and the bullying muralist finally gets the boot.

“I think I was eliminated,” says Nina, “because I did artwork and didn’t really push for design.  But I know I’m a really strong designer and I know that I have what it takes to have a show.  I have a lot of charisma and a lot of personality and a lot of people can’t handle that.  In my life and in my world?  I’m living in The Nina Show.”

Vern tells the remaining red team members, “Stacey, Courtland, Tom…get out of here!”  like he’s suddenly channeling Gordon Ramsay.  That kind of dismissal might work for Hell’s Kitchen, but it’s the nail on the coffin where Vern’s public image is concerned.

There’s a certain karmic charm to the idea of Courtland going head-to-head with Nina and winning, after she manipulated the judges against him in the first episode.  Way to go, Universe.