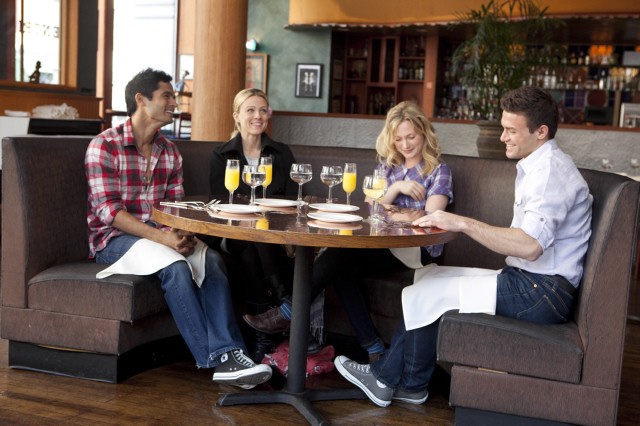 Hello, four remaining designers, welcome to Design Star–it’s about time the season started!  Love this challenge.  Love how impossible and daunting it seems, to make anything that even remotely resembles modern or upscale out of rooms that scream Holy Tschotzke A-Go-Go.  Love that there are no personal attacks this week, and yet there is plenty of drama.  Love that it’s all about design and I love that that there are two of the designers’ repurposing projects I’m dying to rip off the first chance I get. This isn’t a perfect episode, but it is the closest thing to the good old days we’ve had all season.

THE CHALLENGE: Design a modern, upscale dining room by repurposing the furnishings and accessories found in two fictional old lady hoarders’ apartments.  This week the designers help HGTV cross-pimp its sister network by taking their inspiration from dishes created by Centrico chef and Food Network star Aaron Sanchez, and they have two days to complete their makeovers.

It all comes down to paint this week for both teams.  If anybody makes it through this challenge without spray-paint-induced carpal tunnel syndrome, it’s a minor miracle.  Here’s an example of what the designers have to work with: 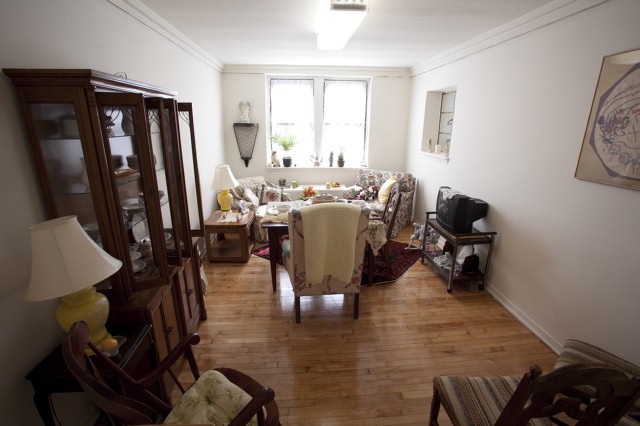 BEFORE: The Blue Team's dining room. The Red Team started with a similarly-styled space. 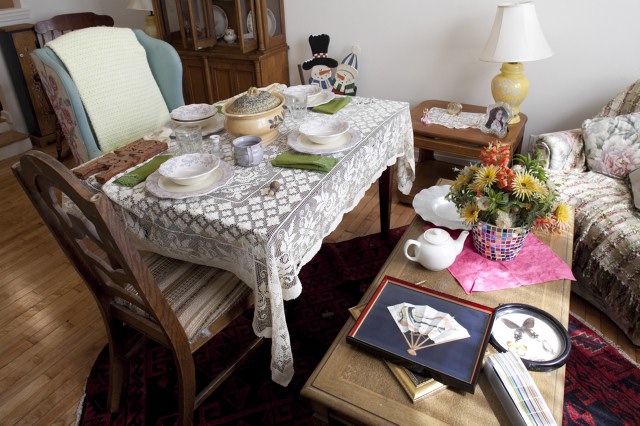 Yes, it was THIS bad.

The Blue Team kicks off their makeover by painting their ceiling Kelly green.  I’ve been painting a lot of ceilings myself lately, and just love the quirky drama this creates.  Emily starts gluing faux flowers to a rectangular drum shade and I start to heave, but I should just TRUST because then she whips out the white spray paint, neutralizes the whole thing, and like Bethenny Frankel, I’m coming from a place of yes. 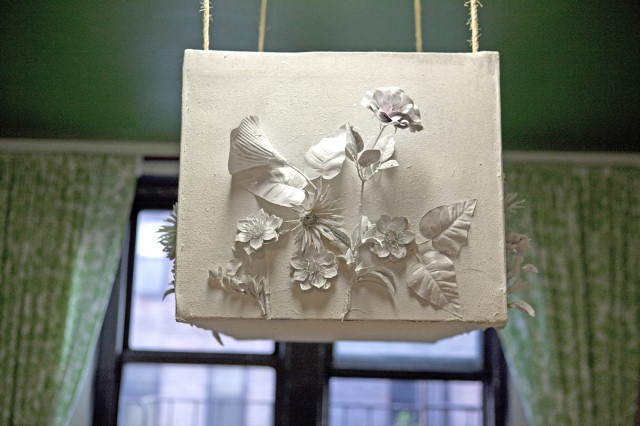 Michael starts crack-a-lackin’ all of the ceramic angels in the room and again, I’m ready to be horrified.  I’m having a flashback to a consultation two years ago when I discovered a new client wanted me to incorporate her 200+ collection of Precious Moments figurines into her made-over family room, and I envy Michael his hammer.  He takes the bigger angel bits, glues them to a mirror frame and spray paints the whole thing black.  The effect is nothing I would personally spend $1,000 on, as Candice claims it’s worth, but it’s an excellent use of the material. 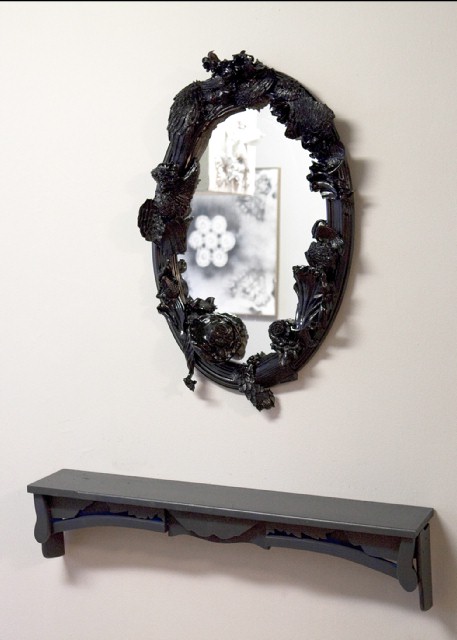 Emily also transforms a china cabinet with fabric and paint, and accessorizes it by creating sculptural elements made from spray-painted dishes.  The resulting dining space is still kind of rough, but it bears positively no resemblance whatsoever to its “before” version.  Bravo. 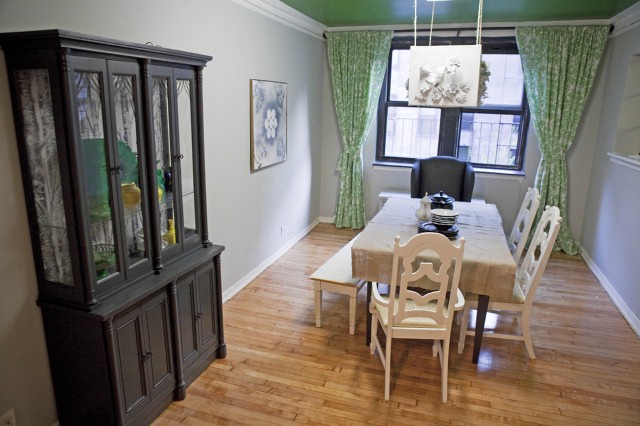 Courtland creates another bright orange Venetian plaster wall, and follows that up by knocking off the Blue Team’s farmhouse table from last week’s episode.  Bone-crushing tired of all the repeats this season!  Then he turns around and in a stroke of genius, creates two wall-mounted sconces out of copper tubing and the inner workings of two lamps.  This is enough to do a mind-erase of all his déjà vu for me. 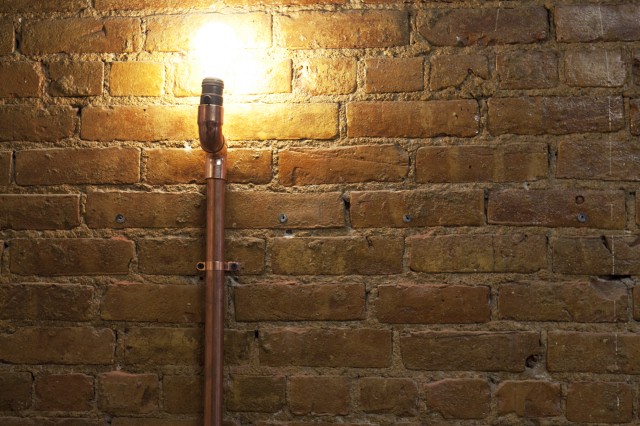 Casey’s main repurposing project—butchering a decent-looking rug and creating a mangled ottoman cushion out of it—is one big cringe.  Every time the camera catches it in the frame, I wince. 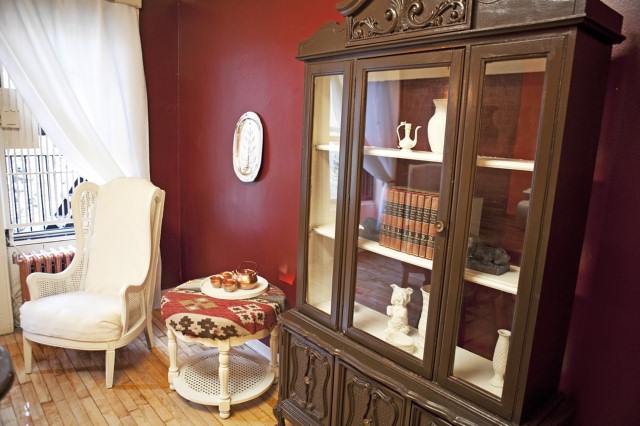 While the Red Team definitely improves its space, it feels more like a tweak than a transformation. 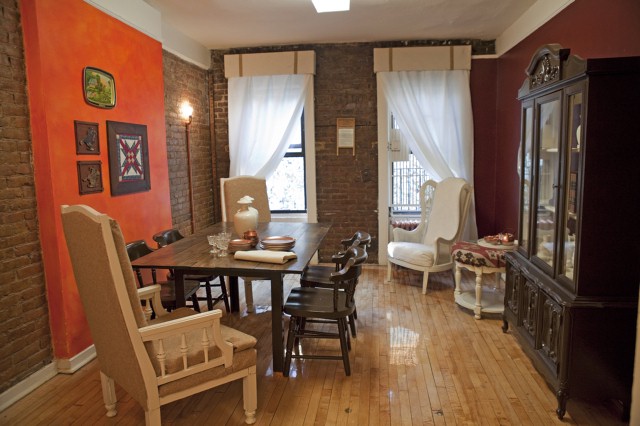 HOSTING PRESENTATIONS: First of all, hats off to anyone who can get up there and do this part of the competition without OD’ing on Immodium, but I have very strong opinions about these four videos.  First up, we have Casey’s and Candice gushes over the “bombshell” who will reel in a male viewership.  Of course Candice likes Casey’s goofball antics—they closely resemble the skits Candice works into her own show, Divine Design.  I have a love/hate relationship with those skits—I love that Candice doesn’t take herself too seriously, but those segments are often too cheeseball for my taste—so Casey’s over-the-top wink at the end just doesn’t do it for me and nothing else in the rest of her presentation seems energetic enough to sell me on her show.  Courtland is still trying to Yo! Yo! us a bit, but he’s believable as HGTV’s next Cute Carpenter and has an authority about him that works.  As for Michael, there’s a certain amount of people in the world who seem to get off on being punished, and maybe there’s enough of them out there to create an audience for a host with Michael’s abusive tone.  He seems to have such contempt for the viewer—I just don’t get why the judges would find this quality appealing.  Then there’s Emily.  Emily is the only reason I’m still interested in watching this season, to be totally honest.  She’s quirky but not weird.  She’s edgy enough to be interesting, but isn’t intimidatingly cool.  She’s vulnerable, yet strong and resourceful.  We know very little about Emily, yet we feel like we know her intimately.

Since the judges don’t declare a winning designer this week, they leave it to me to do so…and duh, I choose Emily.  Conversely, I would never send Courtland home this week—I would kick Casey to the curb and would award Courtland a second-place ribbon for his sconces.

COMING UP: Check back for my interview with castoff Courtland Bascon!