This week’s episode of Design Star features individual challenges!  And the viewers are pleased!  For the most part.  I’m not sure why we need to put the designers in sweatboxes—someone must be handing out free sunrooms down in Chinatown. (I can hear it now…”Check-it-out, check-it-out!”) It’s great to see last season’s winner, Antonio Ballatore, onscreen again as guest mentor. On a side note, congrats to Antonio and crew–HGTV’s ordered another 13 episodes of The Antonio Treatment.  Yay!

CHALLENGE: Each finalist will design a sunroom, using their show concept as inspiration. They each receive help from BFF’s from home, who all happen to be designers themselves. 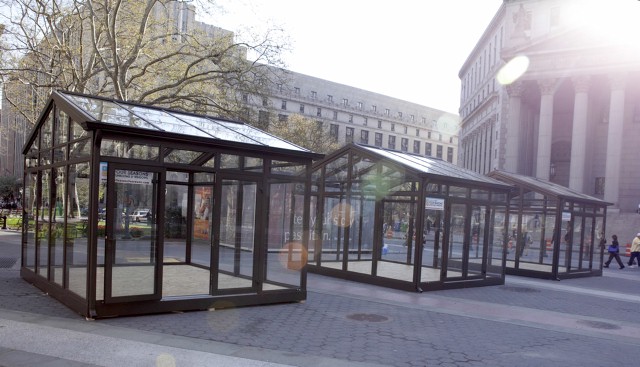 Show Concept: “Help those ‘starter-outers’ out of college run around town, flea market shopping.  Putting things together in a way that inspires them and creates an environment that will make them achieve their dreams.” 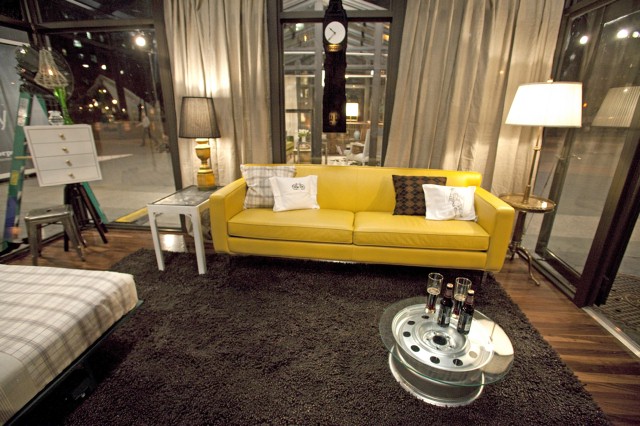 Michael's canary (sofa) in a sunroom. 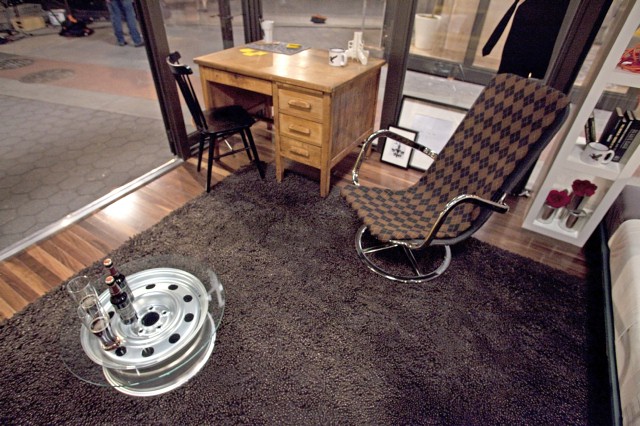 The workspace in Michael's sunroom. 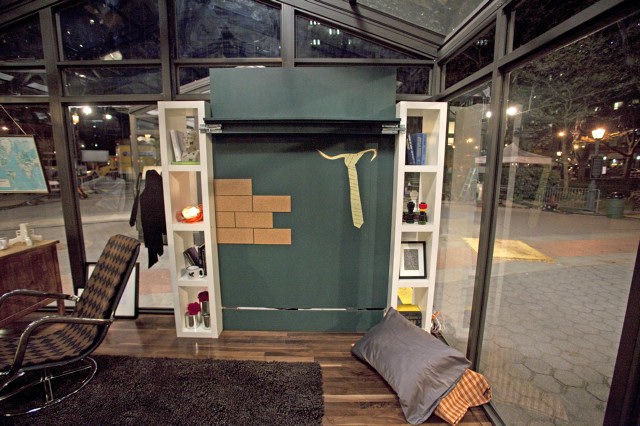 Michael’s show concept falls in line with the demographic HGTV seems desperate to reach: twenty-something youngsters who make advertisers salivate.  As far as his room goes, I do like the overall idea.  The concept of the Murphy bed is an interesting one, although the execution of it—with those horrible cork bricks, tie decal, chalkboard green paint, and gynormous bolts showing—leaves a lot to be desired.  The only redeeming quality on this half of the room is the supercool vintage argyle-covered chair.  I love the eye-popping yellow sofa on the other side of the space.  Everyone should have some crazy-colored sofa once in their lives, and your twenties are the perfect time to pull that off.  Michael’s the last person I’d expect to create a cocktail table out of a tire rim, but since he’s not the first to do tire rim furniture on Design Star (Season 1’s Temple McDowell), we’ve already bought that T-shirt.  All that aside, I do like the general feeling in the space.  It feels personal, it feels lived in, and it doesn’t feel over-designed.

Michael’s hosting seems vastly improved this week as well.  He’s softened that condescension a bit on camera and comes off a ton more friendly.  If he hadn’t preemptively wrecked my goodwill by telling helper/friend Tracy, “I’m so much more creative than these girls are,” I might buy into him, but this arrogant statement makes my skin crawl.  I don’t know how you get off thinking you’re more creative than the next designer when you’re still throwing has-been Blik decals on the wall and regurgitating ideas we’ve seen on previous seasons.

Show Concept: “Helping people achieve a designer look on a budget through items that they already own and then help them source new items that come together for a beautiful room that’s of designer style.” 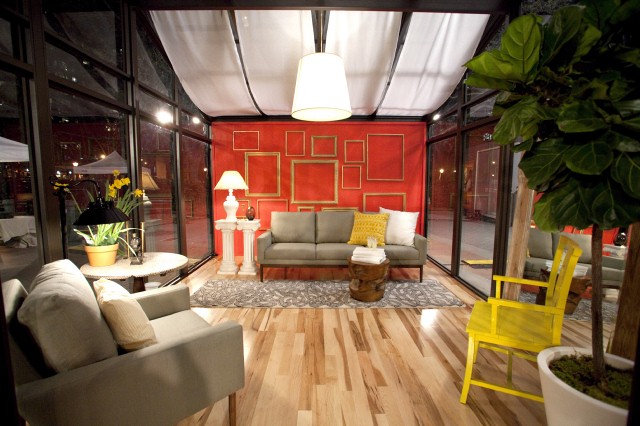 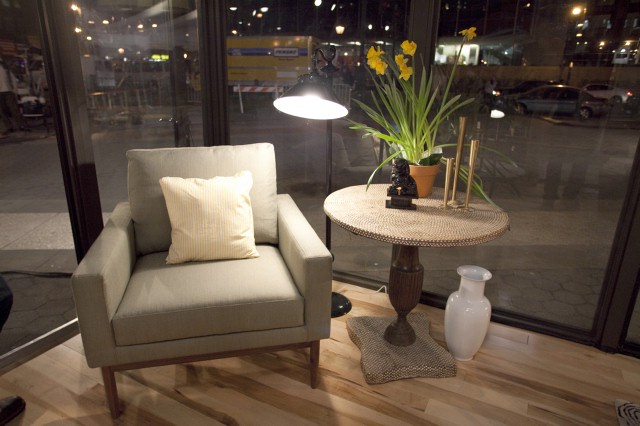 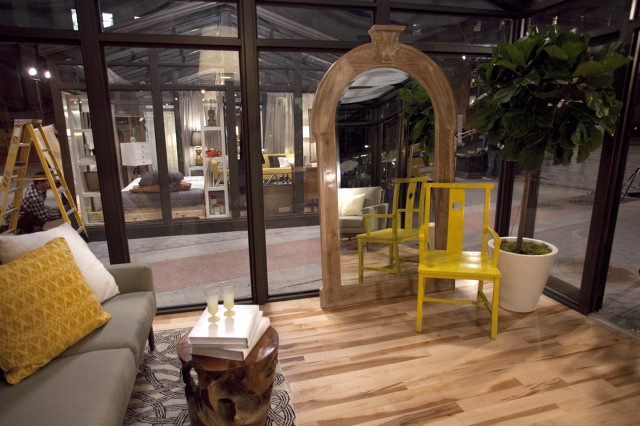 Casey’s show concept reflects recent economic influences and is basically a rehash of a thousand other shows HGTV has done successfully in the past.  The trick is finding a way to make this idea seem new.  Her overall room looks pretty and well put together, but despite high-scoring touches like the color on the feature wall and the repurposed floor lamp and yellow chair, the space feels cold and impersonal.  The architectural mirror leaning behind the yellow chair is gorgeous, but it doesn’t exactly scream “budget-friendly.”  If the argument is that this is something the homeowner just has lying around, chances are slim they’re the type of clients who are desperate to decorate on the cheap.  While Casey’s collection of vintage frames is certainly a good idea for folks trying to decorate on a budget, the idea has already seen its day and is hardly competition-worthy.  Even Jeb–who is more Deadliest Catch than Design Star fan– commented, “I’ve seen that thing with the frames a hundred times.”  What made me laugh though, was Casey’s comment about wanting to create a “sense of place” that has to do with the sunrooms being “in a park.”  There are roughly a dozen trees on a patch of grass in Foley Square…not exactly a park, even by New York City standards.  The tented ceiling is another tried and true effect we’ve seen before countless times.  Pretty, for sure.  But not terribly original.

Casey’s hosting presentation is kind of average.  She doesn’t miss, but she doesn’t knock it out of the park either.

Show Concept: “Take a client’s personal fashion style and transpose it into the room so their home looks like themselves.” 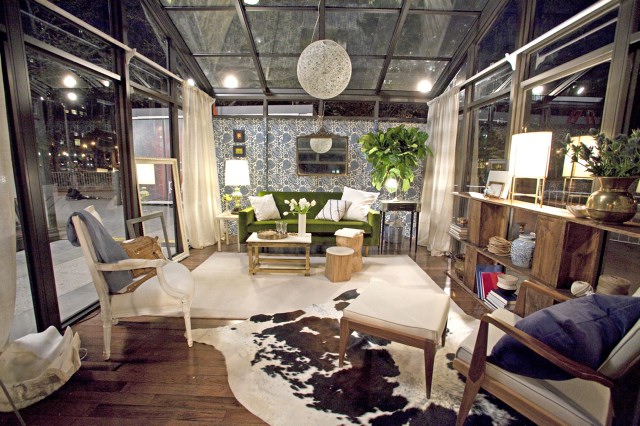 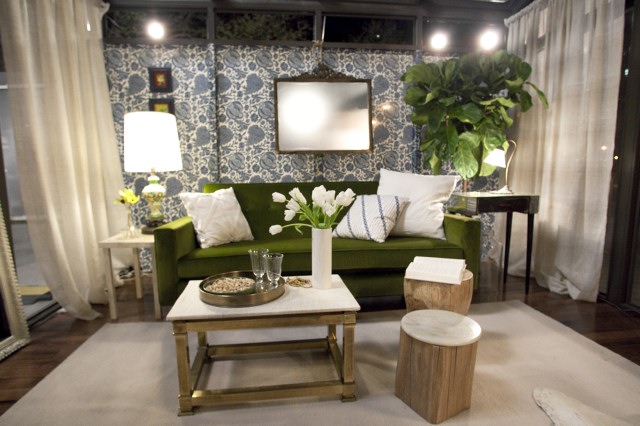 Love this sofa to pieces.

Emily’s show concept is very Dress My Nest, but the idea of taking a homeowner’s wardrobe and translating it into a living space is a very natural way to create a personalized environment and the idea hasn’t been done to death…yet.  Emily’s room is very Emily.  It’s very warm and has a clear sense of the “client.”  It does not come off feeling like a staged set—a real trick for this particular kind of challenge.  I do feel like it’s a bit chaotic looking back at the fabric wall, but I’m leaning toward feeling like the overall coziness of the space would be compromised if Emily had edited anything out.  I’m particularly impressed that rolls of twine and rope make it into her collection of “pretty things,” which is just so charmingly casual.  If Josef Albers can create an homage to the square and elevate color and geometric shapes to an art form, I don’t know why we can’t accessorize with balls of twine and rope.  How ingenious and resourceful.

JUDGES’ VERDICT: There goes my theory that the producers have cherry-picked Casey as the winner all along!  Casey is sent home, leaving Michael and Emily to compete against each other for the title.

Check back tomorrow for my interview with castoff Casey Noble! All photos courtesy of HGTV.