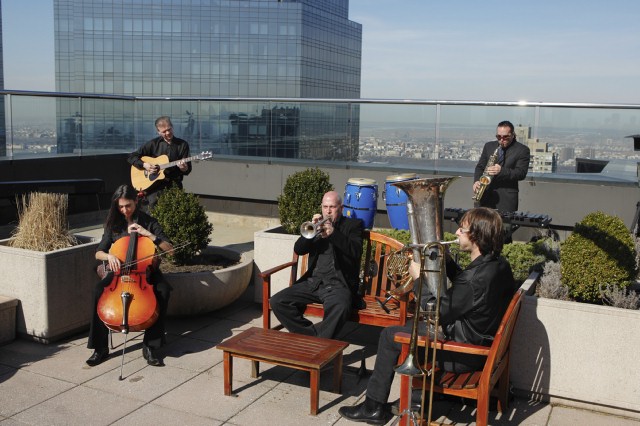 This week’s episode of HGTV’s Design Star involves designing an urban outdoor space.  The designers are brought to the rooftop deck of the Trump International Hotel so that we can be reminded ad nauseam of the production company’s connection to The Apprentice.  Music is supposed to be the designers’ inspiration this time around, and it’s a good thing, too.  They’re certainly not going to be inspired by the rooftop deck of the Trump International.  It looks about as dead and uninviting as a geriatric ward at Bellevue.

CHALLENGE: Design a 200 square foot patio space–nearly the size of my former West Village apartment–using music as inspiration.  Each designer will select an instrument to be their individual inspiration, but the overall patio design needs to be harmonious.

To even out the teams, the women get to annex a guy of their choosing.  Emily says they choose Dan for his construction skills and his ALL CAPS brand of NICE ENERGY! Implication?  Because Nina’s NOT NICE! 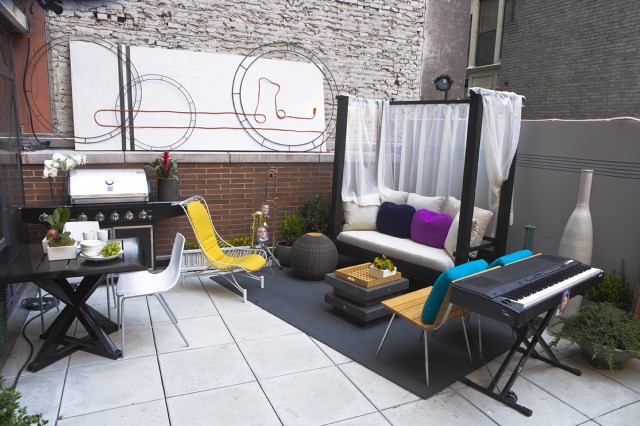 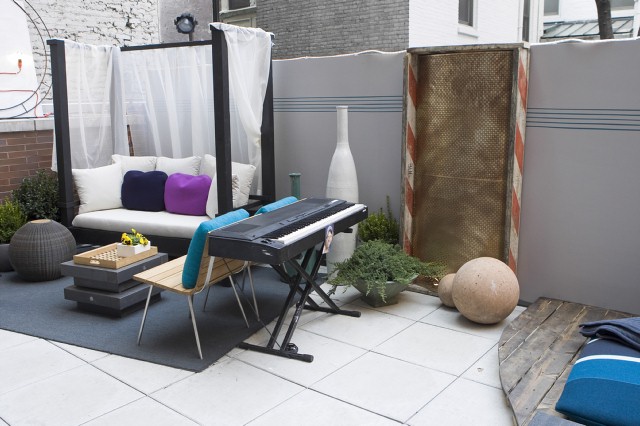 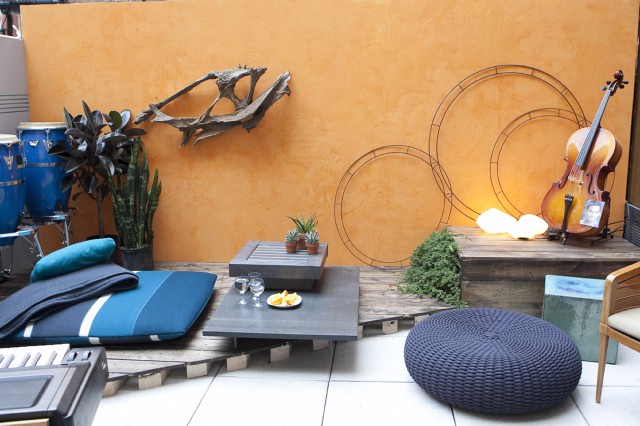 The dudes are off to a tough start when their conga-inspired outdoor daybed can’t be crammed into the building’s elevator.  They’re forced to DIY their own very un-conga-like daybed but that part turns out to be the least of their worries.  Michael’s bitch-slapping Trent again, and most of the other ladies men on the team join the chorus, whining about Trent’s cedar tree selection.  “It’s too Christmas-y,” Courtland declares.  Maybe so, but instead of an impactful element, the guys end up with a collection of small, forgettable foliage.  Snore. Michael rips off his own portfolio, using an orange power cord to create a whimsical trombone-inspired art piece.  If I wasn’t familiar with Michael’s work, I would dig it.  Instead, I’m reminded that DS judge Genevieve Gorder told me last year that a TV designer doesn’t have the luxury of repeating themselves, so this seems like Michael’s admission to the world that he’s a one-hit wonder.  There’s a trite band of five lines crossing the back wall like sheet music (double snore), and some superfugly art piece made out of radiator screening and barricade sawhorses that doesn’t relate to anything.  Courtland trots out a faux finish with a bright orange Venetian plaster wall, which—gasp! clutch pearls—I actually like.  It might be bright but it’s hella more interesting than the gray wall.  The table-bench-thingy in front of it?  No idea what that is or why it’s necessary in life.  Overall, the space looks junky and cluttered, not the relaxing retreat a patio in the city ought to be. 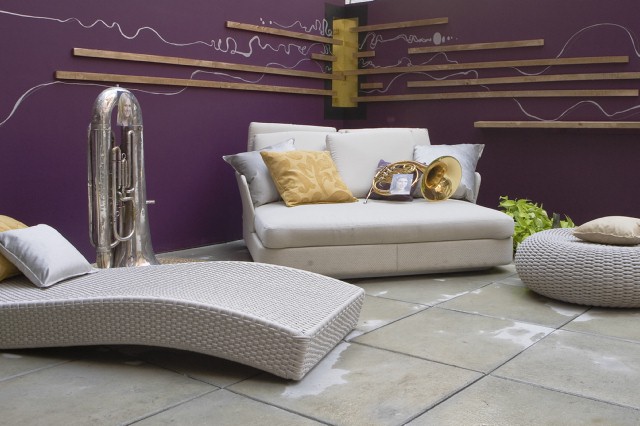 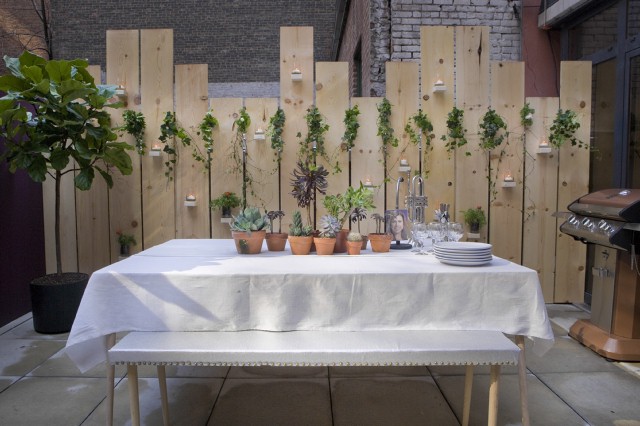 It's craft day, by Stacey's fence! Ready to embellish some miniature pots?

Dan cools the cat fights that previously defeat the ladies’ team, until things start getting ugly.  And when I say “things,” I mean, “Nina’s mural,” and “Stacey’s fence.”  Nina paints two walls the ugliest shade of purple, which the team combines with the gold tones of their inspirational brass instruments.  Is anyone else besides me seeing tacky band camp with this palette?  Stacey bats her eyelashes at Dan and convinces him to build her a country-with-a-“K” fence, which she proceeds to decorate with ivy and votive candles like she’s channeling quilting queen Carol Duvall.  Sweet Jesus, the superyawn that induces. Emily and Casey sew things.  Pillows?  Who knows and who cares…this is the second episode they are playing it too safe.  Dan gets a free pass this week ‘cause he can work saws and stuff.  I would love to know who’s responsible for that white wedding dress of a picnic table.  I look to the left of the patio and I see Mardi Gras.  I look to the right and I’m seeing Ana Gasteyer and Molly Shannon doing The Delicious Dish.  Neither of which say “NYC patio” to me.

Both teams have to incorporate a clunky propane grill into their space—laughable, since according to the NYC Fire Department, it’s illegal to fire up one of these puppies on any balcony, terrace, or roof in New York City.  HGTV’s got some bills to pay with product placements though, so make room for the Grill Master!

WINNING TEAM: Damsels & Dan.  “Walking into your space, we could clearly see how you brought together all of your individual instruments into a harmonious space,” says judge Vern Yip.  “The color palette you chose was perfect for a relaxing patio in New York City.”  How do you say this with a straight face, VernBot? 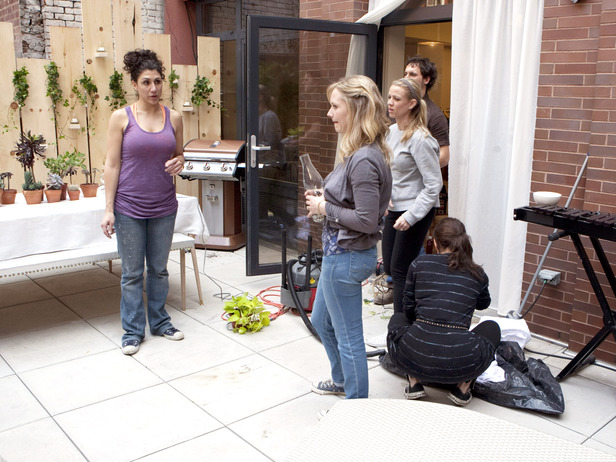 WINNING DESIGNER: Nina, because the judges like it when she doodles on a wall.

Emily makes whiney noises about Nina winning.  “It wasn’t as much of a win as I wanted, because when Nina wins, she’s really hard to be around.  Her ego–it just goes through the roof!”  While this is hardly a surprising revelation about Nina, that kind of statement is never going to come off as anything but sour grapes.

VernBot’s cranky in the judging room again, this week zinging Courtland.  “As a designer, Courtland, you need to step back and look at how insane that looks.  That looks crazy.  That looks like a clown car exploded onto that corner of your patio.”  Tell me again, VernBot, about all those great little nuggets of constructive criticism you pride yourself on giving out?  Because this season, I’m just not seeing it.

Despite VernBot’s harsh words, Courtland is spared this week.  After the judges pretend to deliberate and before they announce their unanimous verdict, Trent interrupts and throws himself under the bus.  Sort of anti-climactic, actually.  Dude has barely cracked a smile since he and his supersized hat brims were assigned to the men’s team.  It’s back to sunny California for Trent. 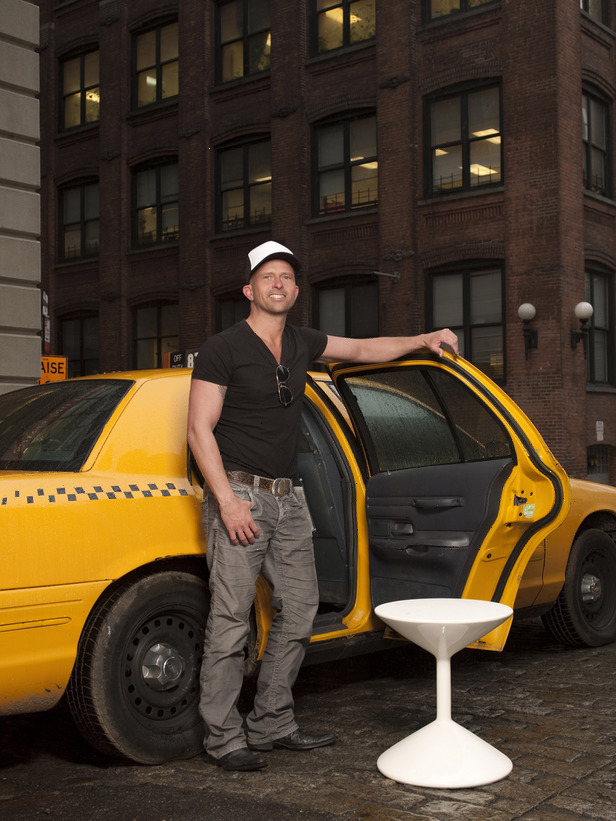 If I seem overly snarky this week, it’s because I’m just incredibly disappointed.  Every season I get caught up in the fantasy of seeing the creme de la creme at work.  I expect to be wow’d and I expect to do a fair amount of drooling over the contestants’ work.  Yet I haven’t been truly knocked off my socks since Matt Locke’s amazing 5-bunk bedroom design in Season 3–Antonio Ballatore’s pink ducks notwithstanding.  So far, I haven’t seen anything closely resembling Star status.  BRING IT ON, LONG JOHN.