House Hunters International is Killing Me

House Hunters International is Killing Me

I am DYING to have an adventure and watching 36 episodes of House Hunters International every week is not helping matters. Two nights ago, I applied for an interior design job in London for sh*ts and giggles, but I would be happy to land anywhere across the pond. I’m sure they got my resume and thought I was confused, but NO, sirs and madams, I assure you I am quite clear about this. I want to sell all my worldly possessions, pack a few suitcases for the three of us and do something funky and exciting. I want to be able to hop on a train at a moment’s notice and be in any number of exotic destinations by sundown.

I feel so landlocked here in Texas. This is exacerbating the issue.

It takes a minimum of four hours to get out of the Lone Star State, and where does that four hours on the road get you? Oklahoma. Now, this is not an Okie-bashing post by any stretch, people. My parents both live in Tulsa and a couple of my favorite people hail from the state, so I don’t mean to disparage the good name of Oklahoma here. But I think we can all agree that exotic, it’s not. It wouldn’t be on anyone’s list of Dreamy Destinations.

If I want to see something cool stateside, my closest options by car are Big Bend National Park (7 hours’ travel time), Marfa (6.5 hours), and New Orleans (8 hours)–distances that require too much time in the car to make it worthwhile over a weekend. Out of those three options, Big Bend is the only place I’ve never been, so although I would love any excuse to visit the other two, they don’t seem as much in the “adventure” column as Big Bend would. 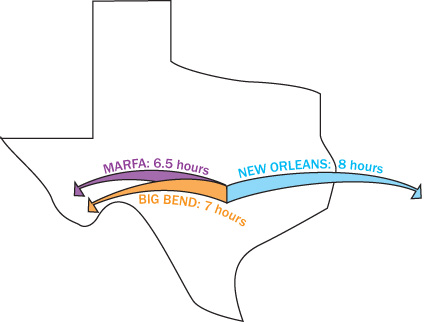 On the other hand, if we lived somewhere in Europe, we could explore a multitude of different cultures in a few hours. When I turned 30, I took a month’s leave from my job in New York and lived primarily in Paris, from which you can be in Amsterdam in three hours, Luxembourg in two, or London in two and a half. In the time it takes us to get from Austin to New Orleans, we could go from Paris to Edinburgh, Scotland. Now THAT is worth eight hours in transit!

Gawd, just typing this fills me with yearning and insane wanderlust. 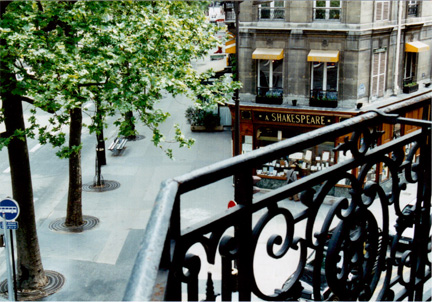 The view from my hotel balcony in Paris. 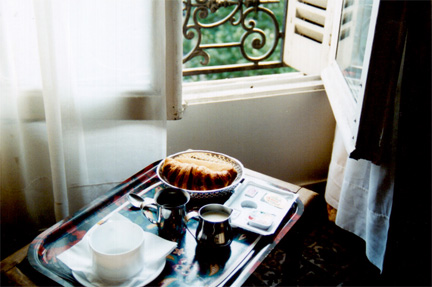 Fresh croissants and coffee for breakfast every morning.

I won’t lie, that month abroad was an experience full of amazingness, but although 29 days of stretching my itty bitty understanding of the French language gave me some funny stories to tell (like accidentally eating horsemeat or mistaking half and half for reduced fat milk and taking a big guzzle), I was mentally exhausted and ready to immerse myself in English again…but I think it would be different now if Jeb and Phoebe and I were there together. We’d have that respite once we returned home from work and school if we ended up somewhere where English wasn’t the predominant language. 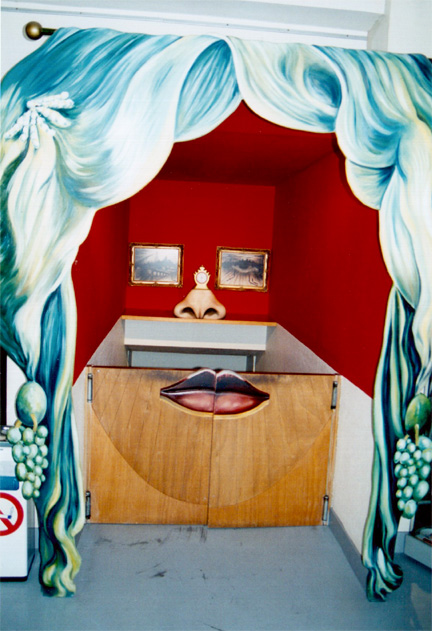 The surreal entry to the Salvador Dali museum in Paris. 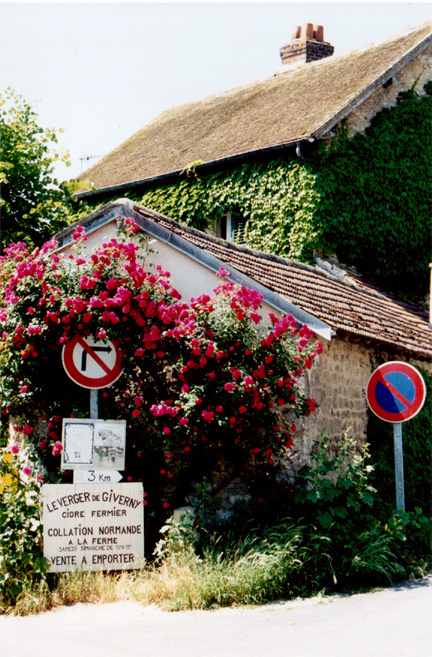 A gorgeous trip to Giverny to see Monet’s gardens was definitely a highlight. 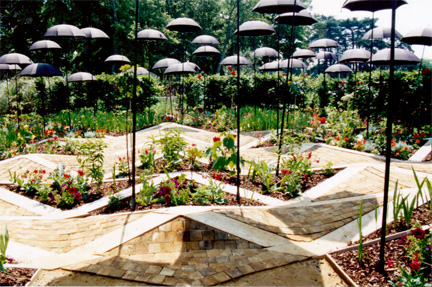 A unique melding of art and landscape at the International Garden Festival at the chateau in Chaumont-sur-Loire. 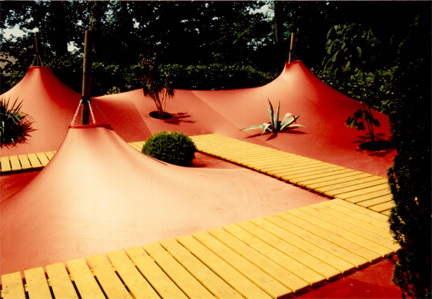 Spandex stretches to create a unique (and pink!) ground cover in this exhibit at the garden festival.

I had an interesting dream after I sent my resume off for that London job. In this dream, I had taken my car into the dealership for service. While there, I noticed a glittery-pink sports car for sale and gasped in delight. “I have to have it,” I exclaimed. Returning to the same spot after getting a drink of water, a sales guy came up to me and said, “It’s all settled, the car is yours!” I blinked, looked at my Kia Soul and wondered, but…I love my car. Am I ready to part with it? Would the glittery-pink Lexus be better? Jeb looked at me and said, “I’m surprised you’d trade in your car for something used.” Wha? I’d assumed it was shiny and new, but on closer inspection, the paint on the hood was bubbling and peeling.

It doesn’t take a rocket scientist to figure this one out.

I realize that if I left the awesomeness of Austin, Texas, I would definitely get some great stuff out of an exciting move (glitter! pink! racy!) but life wouldn’t be all shiny and perfect over there (or anywhere). Phoebe wouldn’t be able to see her cousins, aunts, uncles and grandparents whenever she pleased. Staying in touch with family by phone and Skype would take a lot more effort with those sorts of time zone complications. Learning another language and culture would create its own set of speed bumps. Giving up my business would honestly be devastating in a lot of ways. Trading in Texas for Europe would just a matter of exchanging pros and cons. But it would be SUCH FUN to do it anyway.