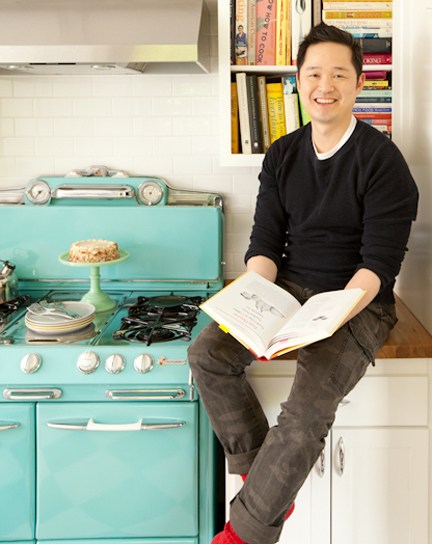 In honor of my interview with sustainability expert Danny Seo at Williams-Sonoma Designer Marketplace, I thought I’d assemble a list of recycling resources for everything from old granite countertops and textiles to furnishings. Don’t throw out what you can upcycle, reuse or recycle!

Interested in who would win in an Eco Showdown between Danny and Ed Begley, Jr.? Find out by reading my interview!

You can’t think about sustainable design without thinking about designer Danny Seo. From books and magazines, to his appearances on HGTV and his work as a contributor on The CBS Early Show, Danny has devoted his career to educating Americans on how to entertain and decorate in environmentally-friendly ways.

You’ve been an environmental activist and have been described as an “eco-warrior.” How do you manage to get your message across without coming off as preachy?

It’s funny, it’s not intentional to not come across as preachy—it’s something innate. No matter what topic I’m talking about, whatever I’m doing in my life, it’s coming from a natural place, which I think is a good thing. From a philosophical standpoint, I’ve always believed in trying to reach the 95% of Americans who are green 5% of the time and not the 5% who are green 95% of the time. If you’re going to reach the majority, you have to think in a mainstream way. You kind of nudge them just a little bit further into the green space little by little.

Do you feel like the father of green design? Because you were certainly the first person I knew of who came on the scene in a big way—you’re the person who introduced me to the concept ages ago.

I wouldn’t say that. There were obviously a lot of amazing environmental activists before me, for more than 100 years. What I did that was a little bit different is that I approached it from a lifestyle perspective and not so much from a scientific or political point of view. It is a very politically-charged, scientifically-driven topic when you talk about the ozone layer or rainforests being cleared but since I’m trying to reach the mainstream audience, I’m thinking about what does that mom who’s pushing her shopping cart with two kids through Costco—what can she do? Instead of telling her that she needs to be concerned about genetically modified food and other things that are just daunting or overwhelming, I want to talk to her about specific things that are meaningful and impactful for her. That marriage of living and lifestyle is where sustainability come together.

Let’s say you have a client who has just moved into a house and they hate the granite that the seller put in and want you to replace it. What do you do in that situation? Do you try to talk them into keeping it so it stays out of the landfill?

The worst part is that you know the seller just put that granite in to sell the house. There are two things I would do. One, I’m a big fan of computer models and renderings. If you show them how those countertops would look with another paint color or flooring—that works to help them visualize it. In their minds, they’ve just been stuck on a specific color palette and not realizing that great style comes from a marriage of things—not just great countertops. The other thing to do, if they do want to rip it out, is to find a home for old granite countertops. They can be recycled or reused. There are certain non-profit organizations that will take it. I also work with a company called WilsonArt, who sells great-looking laminate countertops. I just put laminate in my home. Laminate is more than just faux granite and marble finishes. It also includes solid colors and my favorite: WOODGRAINS! I did a walnut woodgrain—it’s perfect. That’s something they can consider, too. If it’s a client who feels like they need to put in granite for resale value, choose something that is recycled or recyclable and American made. 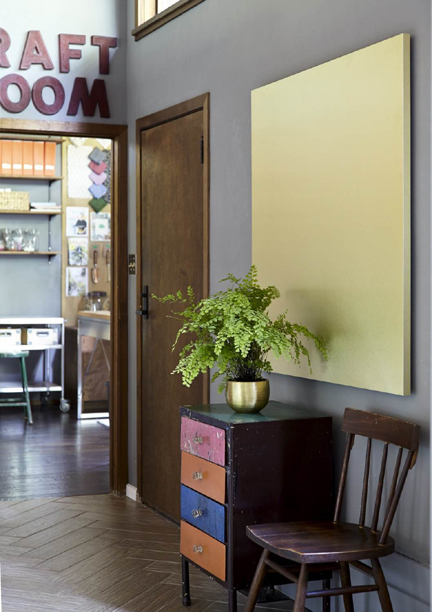 Danny used a square of WilsonArt metallic laminate as art in this hallway. Photo courtesy of Danny Seo.

Is there any kind of magic formula for deciding when it’s okay to throw out an old appliance in favor of a higher efficiency model or any other kinds of products like that?

When you think about electronic products, there’s a window where a refrigerator or dishwasher or washer and dryer reaches a certain age where they need to be thrown out. Usually it’s around ten years. If you are able to upgrade at that point, you’re spending more money on utilities than if you’d just bought something new. The good thing is, all of your appliances are pretty much 100% recyclable, so you shouldn’t feel bad about them ending up in landfills. That’s valuable scrap metal.

Do you think your clients are ever self-conscious about their recycling habits when you’re around?

No, it’s a comfortable environment. I’ve always considered myself a “light green” person, not a “dark green” person. I mean, I’m flying a lot of the time. I wear leather. When I’m thirsty on the road, I’ll buy a bottle of water. At least I’m conscious and aware of my decisions. I just try to make people more aware of the big things and not sweat the small stuff.

I would imagine that someone like yourself who has the vision to upcycle virtually anything would find it hard to throw stuff out. Do you end up hoarding things?

No, I’m a big believer in surrounding yourself with meaning and quality. In my own home, if you asked me about anything in the house, I can tell you its history, where it’s been found, why I have it, what it means to me. What you’ll never find in my home is a vase or a basket or something where I’m like, oh, I just bought it at a store. There has to be a meaningful thing to it. That’s why I love flea markets or antique stores. Even if I did find it at a store, there’s some kind of peculiar use for it, like I used it for a Kerry Washington home makeover story and it’s the one thing that I stole from the shoot. 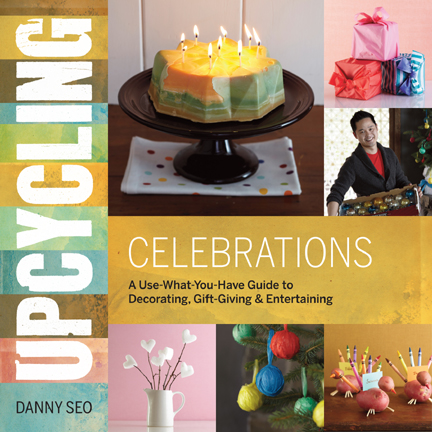 What things you wish more interior designers did to make their projects more eco-friendly?

I like the idea of repurposing or reusing things that are already in the home. Reupholstering existing furniture or giving it a new finish, moving furniture or textiles from one room to another—that’s always nice. Too often, I think interior designers feel like they have to do an extreme makeover to a space versus a subtle makeover. Also, I really wish designers would rethink using exotic materials. If at all possible, source everything domestically rather than selecting something like Brazilian granite or Italian marble or leathers that are tanned in Italy. Those things have a huge carbon footprint. If the products you’re putting in your home have more frequent flier miles than you do, you shouldn’t use them. I just redid my entire kitchen and when I renovated it, I wanted to make sure that everything down to the faucets was American made. Kitchens are the biggest investment in the home and it’s an opportunity to support American jobs and American industries. Nine out of ten times, what I’ve found is that American-made products have a sustainability message with their products. If you’re spending tens of thousands of dollars on a room, that’s a huge impact you can have on the American economy and keep it green at the same time.

What I’ve noticed with celebrities is that the second you take a dollar from them, you become the employee. Even if they’re a really close friend of mine, the whole energy of the relationship changes right away. When I offer to trade my services and skills and point of view and they can barter what’s valuable to them—their notoriety or their ability to use social media and reach billions of people, that’s a pretty good trade. Getting that kind of publicity can for good causes will take more money than they could pay me and they feel good about it, too. They have the ability to do something positive instead of raving about a new handbag.  It works out better that way, but it also gets silly sometimes. Kerry Washington is a client and when they announced she was hosting Saturday Night Live, I said, “I want tickets!” There’s nothing green about it, but that’s a bucket list item and you’re giving me tickets!

Do you think the Average Joe interior designer could use this approach to their benefit?

Well, who’s an “Average Joe?” I think we’re all the same. Some people just have bigger budgets and more interesting clients or larger personalities, but we’re all interested in making things more beautiful.

Who’s the next celebrity you’d love to win over to the green cause?

While watching Living with Ed, with Ed Begley, Jr., it was always funny to see the conflicts between him and his wife over environmental issues. Have you ever had any conflicts like that in your own personal relationships? Have your relationships ever suffered as a result of your environmental consciousness?

You always have to negotiate. It can’t always just be your way. I’m taking my parents to Seoul for their 70th birthdays.  I’m a vegetarian and I’m paying for the party, so I’m using my money to pay for food and I know for a fact that 50 people don’t want to have a vegetarian meal. When I go to Korea, I like to go to Buddhist restaurants, but they’re known for barbeque—that’s the national dish. It’s my parents’ birthdays, their wish. I have to step back and be the only vegetarian among 50 people at dinner.

Who would win in an environmental showdown—you or Ed Begley, Jr.?

Oh, Ed. Totally. The thing that would happen is that I would probably fly to California for the showdown and I’d lose because I flew. When I was an eighteen-year old intern in Washington, D.C., I worked for a non-profit organization. He was the first celebrity I worked with. He came to our organization to testify before congress and my job was to pick him up at the airport, take him to the hotel and around to his appointments. I had all these cars set up and when I met him at the airport and took him to the car, he said, “Why aren’t we taking the subway?” He was so excited that we could take the subway from Reagan National into the city, so I had to cancel all of my cars for the rest of the week. He is the greenest person ever.

Look for Danny Seo’s books Upcycled and Upcycled: Celebrations online and at your local bookstore. For more information on how you can incorporate sustainability into your interior design projects, visit DannySeo.com or follow him on Facebook.