Considering how difficult it is to impress the upper echelons of the design community, it’s unheard of for a person with no formal design training to launch a furniture line and have two pieces go viral on design blogs right out of the gate. Dallas designer Matthew McCrimmon unleashed his Field Day furniture line recently and did just that. I’m thrilled to feature his work, and wanted to ferret out some of the stories behind his charming designs. 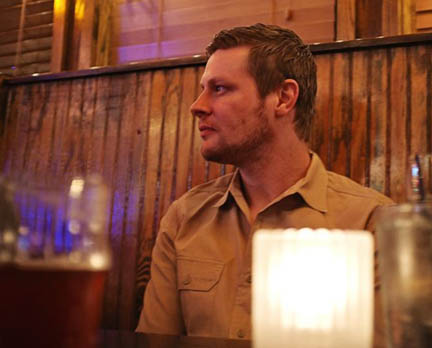 How has your launch been going? I noticed you landed on Design Milk recently.

It’s been going really good! The first thing we got was Better Living Through Design—they were the first ones to pick us up. Then we appeared in Design Milk and first they just posted the Shingles Pantry, and kind of unlike them, they later posted the Envelope Chest. Rarely will they feature two pieces from the same company within a week, so we’re super thrilled, couldn’t be happier about that. There have been a lot of retweets and pins on Pinterest and sharing on Facebook. So the response has been good. The last time I looked, our Shingles Pantry was the most retweeted piece that week on Design Milk. It’s been a great couple of weeks—a fantastic couple of weeks! I could not be any happier with the response. We are definitely getting some orders flowing in from around the country. I hate to say it’s taken off, but it’s beaten my expectations as far as just floating it out there amongst the online community.

(Even the folks at Herman Miller are fans! Read #7.) 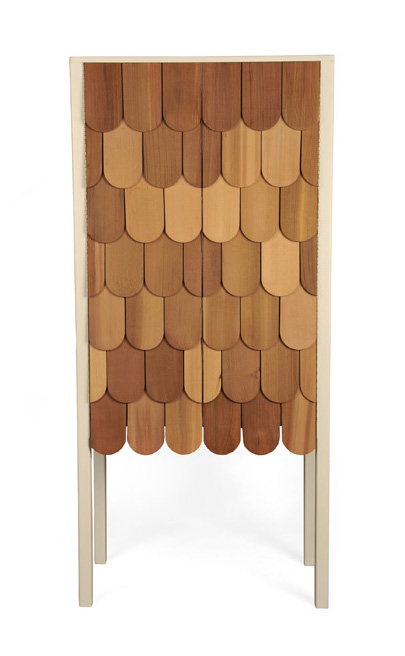 Thank you! It’s always going to be a work in progress, I can tell that now.

How many Field Day pieces do you have in your new place?

Just one, the Envelope Chest. That was actually given to Krista as her Christmas present. It was her favorite piece, so while she was gone on her Christmas break, we went ahead and put one together for her. It holds all of our blankets and extra pillows.

Matt’s girlfriend is Badder Homes and Gardens blogger, Krista Hogg, for all of you fellow fans out there! 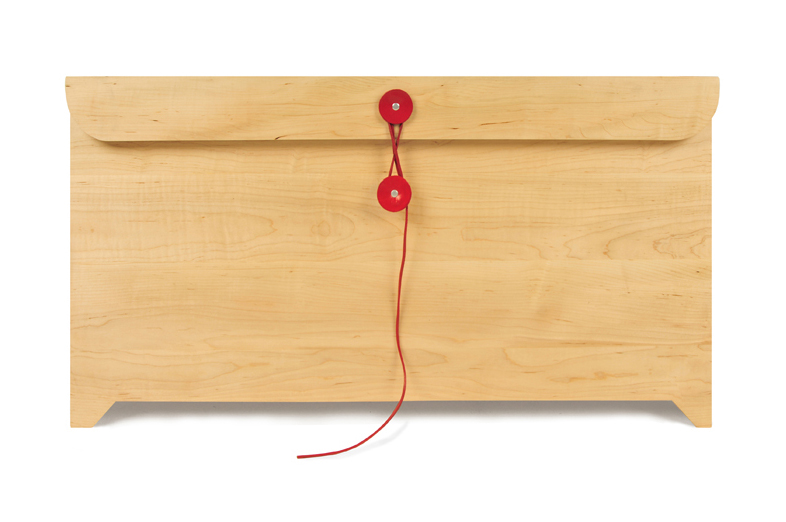 Absolutely nothing! I got into furniture about four years ago. I was working with unfinished furniture manufacturers—a kind of dying-off segment of furniture. I was working with them, trying to release some modern, unfinished furniture. There was such a DIY movement and so many more people capable of refinishing things, why not give them an outlet for modern furniture they can paint or finish themselves? That was my first foray into furniture as far as working with manufacturers and doing some light design work. We weren’t really doing anything extravagant—it was pretty straight-lined stuff. I did that for a few years, admittedly without a lot of success. The unfinished sector has been a slowly sinking boat for many years and I don’t know if there’s really anything that can buoy that any longer. The entire time, I’ve been interested in furniture and design and one day just decided to start sketching out what was inside my head. I never thought of myself as a designer, never had any formal training. I just kind of saw stuff in my head and would sketch these ideas out and it kept going and going. I finally met a guy here in Dallas who had a woodshop and started interning with him, putting some pieces together. That’s how Field Day was started. KC now builds furniture for Field Day, so it’s been a bit of a role reversal, but he’s been a very important person in my life. A lot of design is aesthetic, but a good portion is also structure and properly building something. It’s something I’ve always thought about, always loved it since shop class in high school. One day you turn 30 and you start believing in yourself a bit more! I kind of have the mentality when looking at some furniture that I can do that better, so why not? That was it…a lot of hours sketching stuff, a lot of hours doing 3D modeling, a lot of hours in the woodshop. Slowly over the last eighteen months, I’ve been finding my voice.

Where did your inspiration come from for the Shingles Pantry?

That was inspired by the very first piece I ever worked on. I was building a set of stools and I just loved the half-round shape of things. All of the cut-offs from the stool I was building—all of these half-round sticks—I started playing around with them and realized I really liked the pattern. I bought a case of cedar shingles from Oregon and when I laid them out, I realized the variation and depth of them were just stunning to me. They were soft, they were inviting, they had a flow to them. I decided to take that material and see how I could use it–how could I lay it out so you could get the full effect of it. That’s when I started thinking of a pantry or a larger piece.

So you make your own prototypes, or does your carpentry mentor do it?

I do the prototypes. Our basic practice is, I’ll sketch everything out in pencil and paper first, to get the basic idea down, then I use a 3D modeling program and get all of the dimensions worked out. Then I’ll sit down with him and we’ll work out materials. I build all of the prototypes as a way for me to figure out any design issues that do come up during construction. The final product is built by him, here in the heart of Dallas, right next to White Rock Lake.

The Envelope Chest is so clever and simple. I love that little bit of humor in a piece like this. Did you have fun putting that together? Did you just have a Eureka moment while looking at a kraft envelope?

Krista won’t take credit for it, but that was basically her idea. She and I were in a bar…

Of course you were!

(Laughing) We were at the Beauty Bar in Dallas one evening after dinner and I told her I’d been really wanting to build a blanket chest. I’ve never seen a cool version of that, so I think if I want one, maybe everyone wants one—which is probably the worst business mentality of all time! But I just wanted a cool, modern blanket chest. It’s one of those heirlooms that gets passed down. Krista took some napkins and started playing around with it and came up with the clasp on that. I thought that was a really good idea so I pulled some pictures of envelopes and added the front flap to the lid so that the negative space creates the fold of the envelope, but for the most part, the thrust of that piece came from her. We also built a cherry version of a vintage Coleman cooler. It didn’t come out exactly like I wanted, but I might release it one day. It was cool, it was made like the old one, with the curved bottom and three sections…it was very masculine-looking. I’d like to add a metal band around it because it’s hard to tell some of the detail when the whole piece is made from one wood. It needs an accent to give it some depth. But yeah, it came down to sparkling wine and napkins! 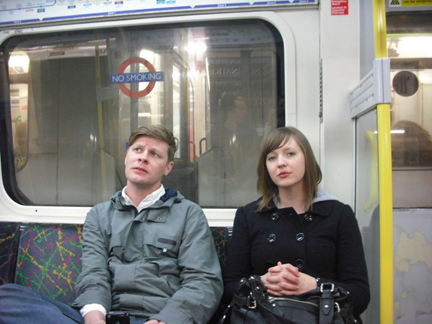 Hipsters on vacation: Matt and Krista hit the London Underground.

If the Envelope Chest is meant to be a blanket chest or a toy chest, does it have a child-safe hinge on it?

The hinges are called torsion hinges. We did a lot of research as far as hinges and anti-slam devices go and found this company called Rockler who makes these proprietary torsion hinges. The hinge and the anti-slam mechanicism are built into the same unit. The door can’t slam down. If you lift the top of it, you’ll feel some resistance to it. You can actually open that lid and it’ll stay open at ¾ open or it’ll open all the way. The traditional way to do it would be to put these weird hinge-scissor things in the corners that would keep it from slamming down, but this actually puts the whole mechanism into the hinge. It’s beautifully designed, very heavyweight. The only issue is, they’re about $60 a hinge. It can easily be used as a toy box around children because there will be no slamming of fingers.

All of the pieces are available through the website, and there’s pricing on there too. Just email or call us! We will be looking to move out to select markets in Texas in the future. Dallas would obviously be first, and we’d love to be in Austin and Houston. We’ll certainly reach out to retailers outside of Texas, but we feel like it’s important to be established within our own community first.

I’m loving the stark contrast between your design endeavors and Krista’s. With your stuff, I’m picturing Snow White getting something out of your Shingles Pantry with little bluebirds tweeting around her. With Krista’s blog, there might still be the Seven Dwarves and bluebirds, but the bluebirds would be decapitated by Grumpy and the rest of the Dwarves would be featured in some porno-themed Etsy art.

You nailed it! That’s us.