RHONY fans know that money can’t buy you class. Well, it sure can’t buy you good taste either, as evidenced by Selling Spelling Manor, HGTV’s recent foray into celebrity homes. 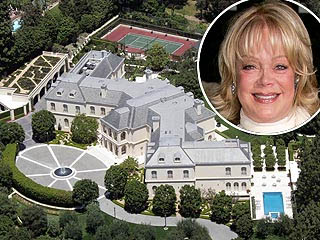 Part big-money Hoarders, part Cash in the Attic, this TV special centers on Candy Spelling’s recent sale of her 56,000 square foot manse and most of her worldly possessions as she prepared to downsize to a 16,000 square foot unit in a high rise with smoggy views of…ummm, Century City? I’m not from LA but honestly, is that the kind of view you go for when you have gazillions at your disposal?  Weird. 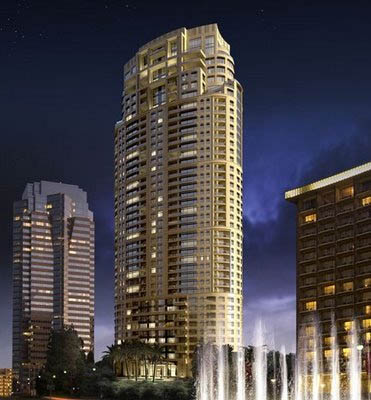 This episode was just chock-a-block with cringe-inducing moments of the sort you might experience while watching Toddlers in Tiaras, or a mere on-air promo of Dance Moms.  It all started in the SCARY DOLL MUSEUM.

Yes, the Spelling manor included a creepy doll museum to showcase all of Candy’s beloved Madame Alexander dolls.  I don’t know how many there were, but when she auctioned them off, she racked up $750K, so I’m guessing it was quite the blinking little army.  Some of the dolls fetched prices as high as $18,000, including one that was snapped up for $12,000 by its previous owner who wanted it back because he’d never found a replacement since he’d sold it to Candy some years earlier.

Moving on, we are granted tours of Candy’s mammoth storage facility, where most of her furnishings live while she’s slumming it in some kind of Bluth family condo unit.  Her future Manor in the Sky is under construction, you see, which gives us a great opportunity to check out some of the treasures in the warehouse.  What does she monitor multiple times a day via security cams?  Rows upon rows of ugly furniture, a virtual Fancy Plants franchise, and boxes of useless crap.

Now, we all have boxes of useless crap, but don’t you expect a gazillionaire to have good crap?  You certainly don’t expect someone who’s entertained presidents and princes to be hoarding BEANIE BABIES.  But there she is, taking Beanie Babies and Cabbage Patch dolls down to a strip center to have someone pop them up on eBay.  Yee-ikes.

And speaking of Cabbage Patch kids, out of that whole warehouse, Candy pulled out two very special belongings she’s saved to pass along to her children.  One was a decoupaged vintage suitcase daughter Tori had crafted herself as a teen, and the other item was a custom Cabbage Patch doll that was modeled after son Randy.

What follows is one of the most awkward pieces of reality television I have seen in a long while.

Even before they roll the footage of this loving presentation via Skype from mother to son, I’m thinking, “What the hell is this thirty-something dude gonna do with a damn Cabbage Patch doll?”

And I’m right, poor Randy Spelling–33 years old at this point–wants to be nice to his mom in front of the cameras, but he’s like, “Oh, riiiiiight.  I called it ‘Bob,’ didn’t I?”

“No, it’s supposed to be you!  His name is Randy!” Mama Spelling gushes.

Dude couldn’t even remember an eponymous doll, which should clue you in on how much he valued it as a kid, much less 30 years later.

Here’s where Candy holds the doll between herself and her webcam, waving its little Cabbage Patch arm at Human Randy and talking to him in baby talk, as if she’s Chucky the doll.

Human Randy is firmly wedged between a rock and a hard place, but it doesn’t take a rocket scientist to figure out what’s probably going on in his head:

OMG, I’m never going to hear the end of this.

A doll, Mom?  Seriously.  Give me Tori’s suitcase and give her the effing doll.  I’m begging you. 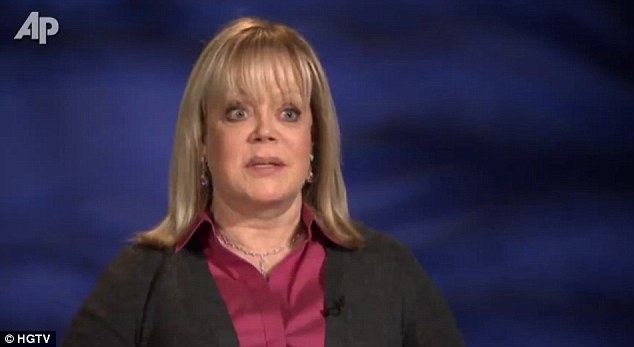 What, you don't want the doll?

Candy’s formerly estranged daughter Tori arrives to collect her Manor booty and it’s very obvious which of the Spelling children is gifted with better acting skills as she fawns over her flea market suitcase.  Candy mentions her big doll auction and Tori tosses out a plea for a couple of dolls for her girls, but obviously Mama’s not over their big fight because Tori’s just getting the ‘case.  Sorry, Stella!  Sorry, Hattie!  Grandma holds a gruuuuudge.

Next, we’re treated to a sneak peek of what Candy has planned to wreck decorate her future penthouse: green marble and granite in the kitchen, pink onyx in a bathroom.  Can you say stuck in the ’80’s? I give her six months before she slips on that ugly polished floor and breaks a hip.  Or maybe she’ll wear those grippy little toed sneakers in her Sky Manse?

We have a lattice-fest planned for our future mahjong room, complete with raised concrete planters for the many rose bushes we want to haul up there. As if the pink onyx bathroom isn’t Rose Milk-y enough.

Then the unthinkable happens.  Candy meets up with former neighbor and illustrious designer Karim Rashid at a dog park, to get the scoop on the remodeling efforts of Petra Ecclestone, the new owner of Spelling’s former Manor. He can’t wait to tell Candy that the 22-year old Formula One heiress, who snatched up The Manor for a cool $85 million ($65 mil less than the much ballyhooed asking price) has ripped out all of the antique mantels and light fixtures and is going modern, painting everything black.  Why, he doesn’t understand what in the world would motivate someone to change a single one of Ms. Spelling’s fabulous selections! 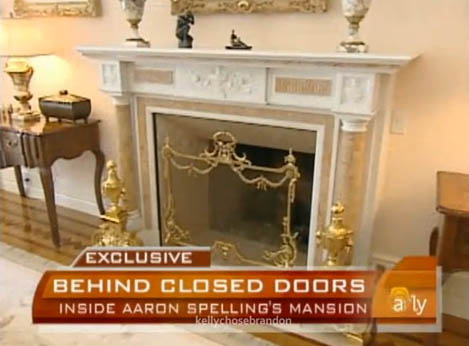 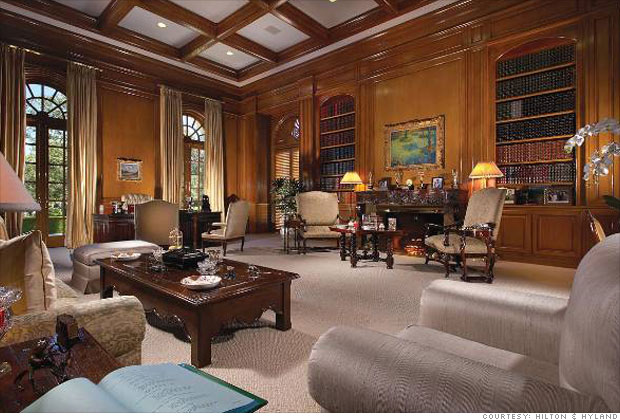 No, a 22-year old doesn't want to live like this, and I'd be willing to bet that Karim Rashid doesn't either.

I’m sorry, but you and I both know that if Mod Man Mr. Rashid moved into the Manor himself, he would gut the place in a New York minute.  While he might not paint the interior’s entirety black, it’s soul-crushing to see a designer of his renown be the hanger-on, acting as if Candy’s frumpy decorating style is beyond reproach.  I don’t know why he wants to play the Yes Man.

She’s never gonna hire you anyway, Rashid, because she’s got it all covered with her green and pink sh!t. 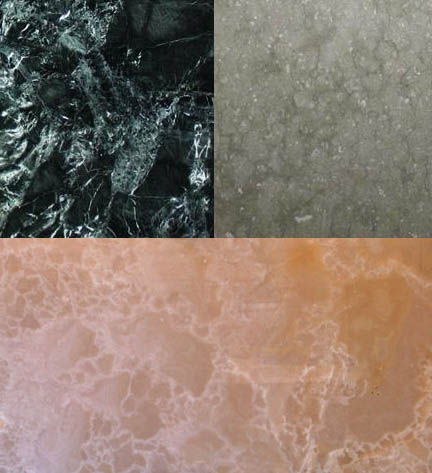 How's this for a new construction palette?

Cut to the clips of Candy and an art historian who’s appraising a few of the gargantuan oil paintings she’s putting up for auction.  They’re enormous floral pieces and nothing that would garner more than two seconds of your attention, but the way this Brit is going on and on about the “Grisaille” (underpainting) and we see there’s a plaque bearing a date in the late 1800’s, we’re being set up to believe these are super valuable.  After all, that stupid doll was eighteen grand, so you can imagine how much this thing is going to go for!

His estimate?  $12,000-$15,000.  Not much for such a large piece in today’s market.  Less than that damn doll!  Which means it’s a nineteenth century version of what you’d see at one of those modern day starving artist sales in some rundown Holiday Inn.  Yeah, it’s trash on canvas, but it’s really old trash on canvas.

Now that we’ve gotten rid of the beanie babies, the many, many varieties of dolls and the ugly oil paintings, it’s time to start buying some new stuff. Despite the remaining warehouse full of dustables, Candy wants to buy some more things she’ll never pass down to her kids and grandkids, so she heads to an antique store.  The owner comes out to greet her and makes a big fuss, then tells her one of his designers will help her make some choice selections.

Cue the Eurotrash designer, carrying a rat dog in his arms.

I am not much of a drinker, but I could really use a cocktail at this point.  It is one thing to have animals in the workplace, but when you are meeting with a client for the first time, can you not leave the pooch back at your desk?  Good gawd, what’s going to happen next on this craptastic hour of television?

And I would change the channel at this point, or erase the DVR or whatever, but I’m hanging in there because I’m expecting to see the big reveal of Candy’s penthouse and I want to see just how bad it gets.  But…

They’ve broken the cardinal rule of home and garden television.