The Day I Crashed Red

The Day I Crashed Red 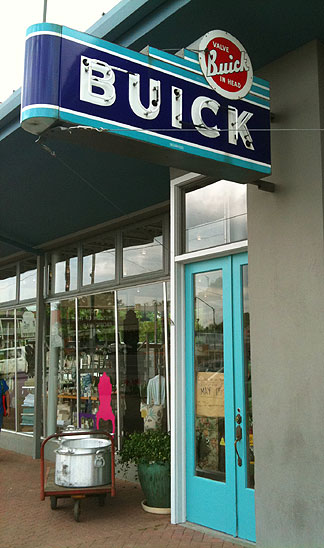 The new Red in Fred

Those damned Novogratzes still haunt me with their supercoolness and their vintage accessories and their New Yawk flea markets.  So instead of whining incessantly about how I’m a million miles away from a great flea, I’m making an effort to reacquaint myself with my area’s vintage resources.  On my list of hot spots is a store called Red in Fredericksburg–a store whose doorway I’ve never darkened until last Friday, but over which I have regularly drooled since somehow appearing on their email list a year or so ago.

For those of you outside of Central Texas, Fredericksburg is a little German town nestled in the Texas Hill Country, full of opportunities to part with your money.  It’s about an hour and 45 minutes from Austin, so it’s perfect for a daytrip but not just a little trip to the next town over.  This is just a little background info for later…

My strategy was to start with Red, since this was the store literally driving me to town, then fan out and hit whatever I had time for.  I plugged their address into my nav system and when we approached the building, saw a huge banner announcing they’d moved and their new address.  I plugged that address in and found a parking spot right out front of their adorable new building (a former Buick dealership with all of the retro signage intact) and was immediately lured to the side of the building by the sight of some tufted leather benches with a sort of golf-cart look to them.  Rather than head to the front of the store, where apparently there was a huge sign notifying passersby that they weren’t going to open until the following day, we made a beeline for those benches and their neighboring baby pink and Caribbean blue palapas.  Next to the benches and the palapas was a side entrance to the store–with no doom-inducing signage about them still being closed.

When we walked in, we were greeted warmly and never realized for an instant that they weren’t officially accepting customers yet.  We wandered around oohing and ahhing at everything.  I felt like I’d found “the” place.  Until I was reprimanded for taking photos.

You mean the photos I took of the light fixtures that I texted to a client and immediately won approval to buy three?  You mean the photos I took of things I wanted to pop on my design blog?  I’m in trouble for taking those pictures?  But it turns out many items are one-of-a-kind and the store is protective of their suppliers’ intellectual property, so fair enough.  I should’ve asked before I let loose with the pictures and the texting.  Forgive me if I loathe uttering the words, “I write a design blog,” since I expect what follows in anyone’s mind is, “doesn’t everybody?”

So now that we’ve unwittingly crashed the store and taken unauthorized photos and I’ve received the go-ahead to buy $350-worth of pendant lights for a client back in Austin, have found the perfect little baby gift for a client/friend who’s about to pop, and nabbed my Novogratz-inspired fix (a supercool vintage metal “R”), a store employee says, “I don’t think we can even let you buy anything yet.”

Wha??  Ummm, I drove here for you.  I burned many, many fossil fuels to obtain my little piece of Novogratz.  My client needs her pendants. What do you mean, we can’t buy anything?

Let me tell you.  I would have been so pissed if I drove my butt all the way out to the ‘Burg on the one damn day I couldn’t make a purchase in that store, but fortunately for me, a certain little baby about to make its debut, and my pendant-seeking client, someone else arrived on the scene with some business sense and took my dang money.

Here are my illicit photos: 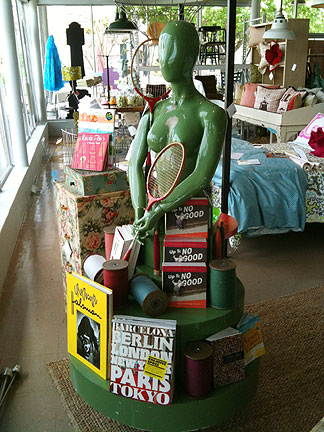 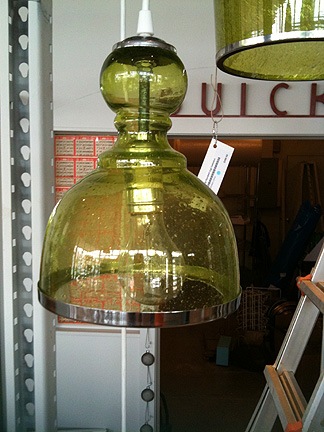 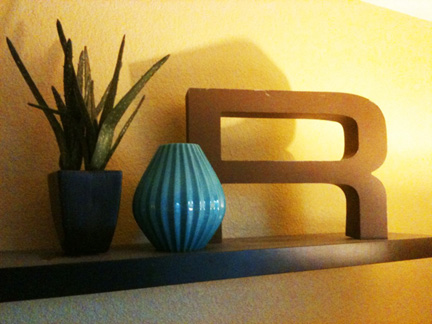 My vintage metal letter in its new home, $48. 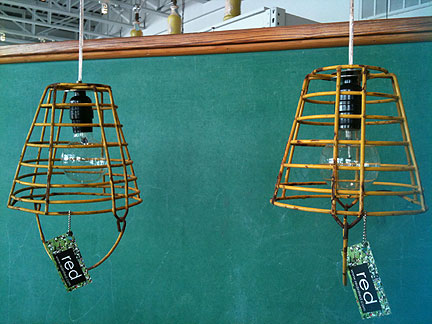 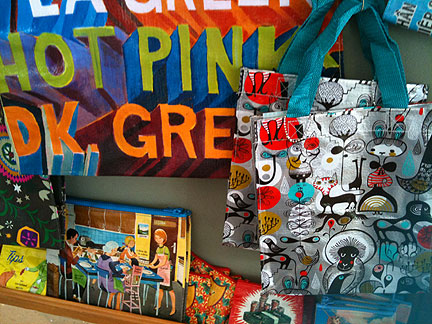 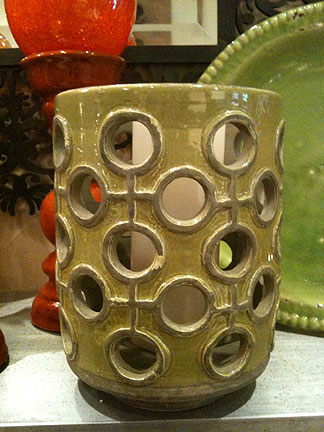 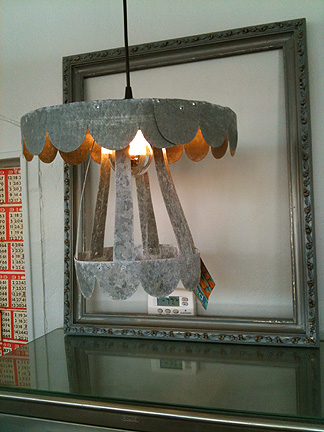 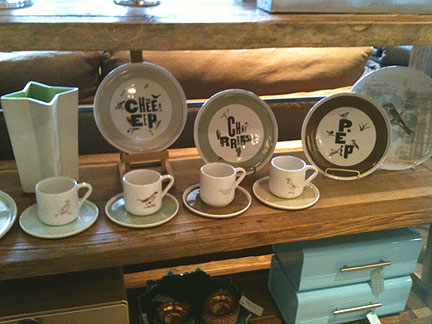 Red is also a dealer for upholstered goodies from Iron Thread Design, a perfect blend of retro and modern. 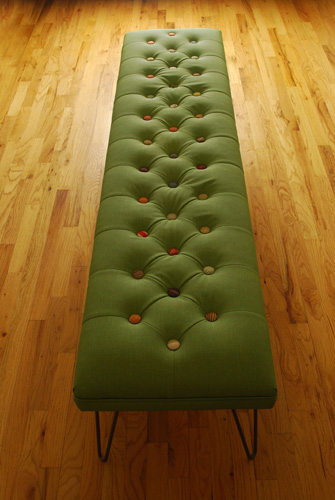 While we were in town, we saw lots of other goodies as well.  The next store to get me going was called Something Different II, where I spied: 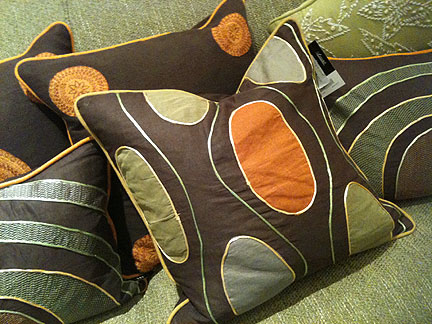 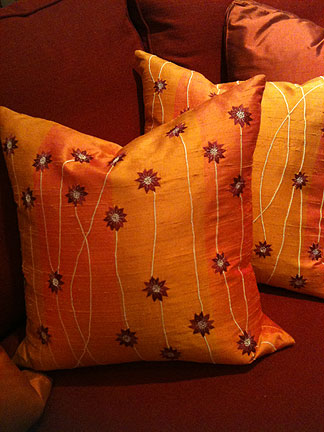 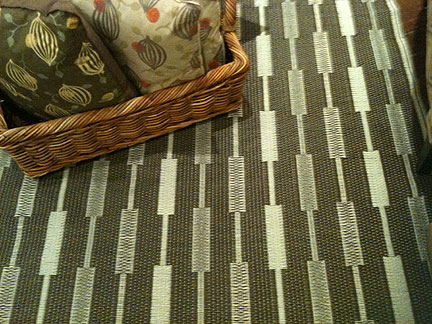 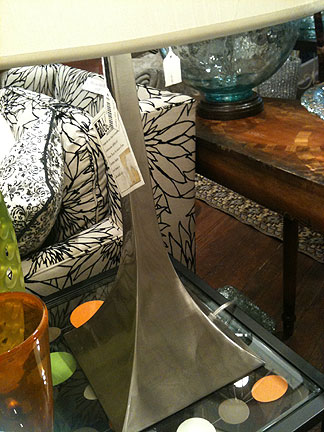 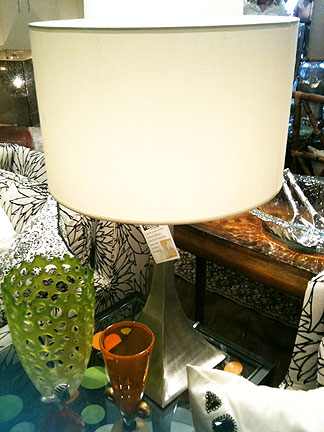 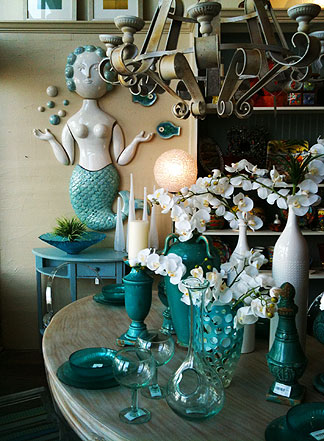 I would win Mother of the Year if I brought home this mermaid for Phoebe.

Some fun stuff from Heirlooms: 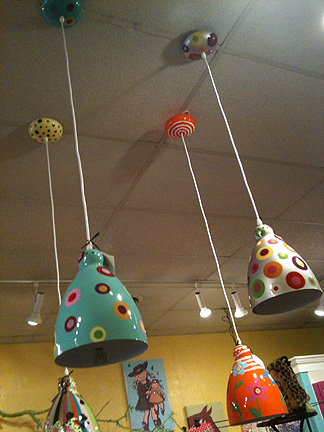 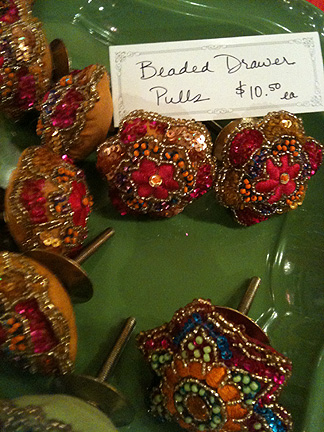 Along the way, we had lunch at the Hill Top Cafe (meh), where we encountered these folks: 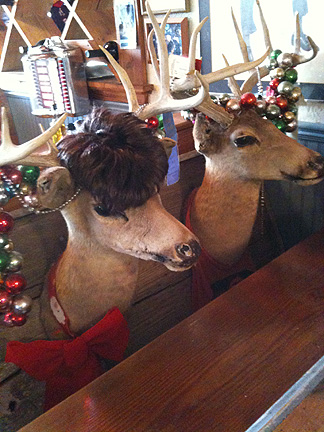 …and had the best peach cobbler à la mode in the whole wide world at Clear River.  You can’t drive out to Fredericksburg without sampling their famous peaches, and Clear River’s was, without a doubt, the best I’ve ever had. 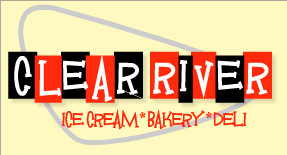 A stop in Johnson City on the way to Fredericksburg yielded this fun necklace I ordered at Suzy Q’s: 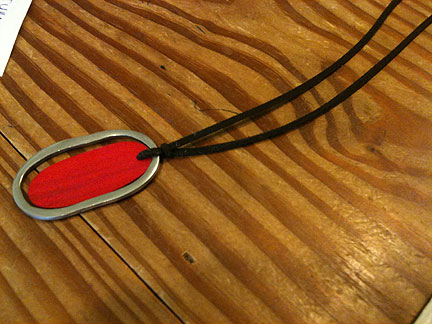 So concludes our little tour!  For those of you heading out that way, Red’s new address is 307 East Main Street. Go there!