Back in December, I admitted that despite a fear of public speaking and appearing on TV, I was on a personal quest to make the cast of HGTV’s Design Star, Season 6.  I don’t think I’ll get in trouble for disclosing that I didn’t make the cut.  I’m seriously unfazed by it though, because that particular goal led me to bust through a lot of obstacles I had placed in my own path and I feel like I’ve become a stronger, more confident person as a result.  Who knows how many years I might have let all those mental roadblocks keep me from doing some really interesting things!  Since so many of you were incredibly kind enough to voice your support, I thought I would update you on everything:

As you know, I bought a Groupon for an improvisational comedy class at ColdTowne Theater.  As I was walking into my first class, I realized that in the old days this would’ve felt like The Green Mile…like I was walking into the theater to my ultimate demise.  But because I’d already gotten comfortable doing videos in public places, I felt a level of anticipation akin to what I might have felt if I was going to nothing more nerve-shattering than a cookie baking class.  When the night was over, I was SO HIGH.  I did so much better than I would have ever imagined!  In fact, I did a pretty dang good job.  I was funny, people laughed.  Isn’t that what drives every comedian on stage?  Another overriding thought I had throughout the night was, “Jeb would be AMAZING at this.  He’s so quick-witted and does these amazing characters…maybe one day we can become a husband and wife troupe!”  As the course progressed, however, I would say I leveled out around average.  I wasn’t a wiz at improv, but I didn’t make anyone cringe while watching me, either.  The buzz I felt after that first class diminished each week, but man, what an experience!  It was really shocking to discover that this getting up in front of people thing–and worse yet, screwing up in front of a crowd–would not actually kill me.  I am hoping to go back and take a sketch comedy class to help me craft some fun videos I have planned for my blog/website.

I continue to meet with the ladies in Speak Tank Austin and it is one hell of a supportive group.  Led by Donna Johnson (a Room Fu client from way back), we meet once a month in private room in a coffee shop to develop our public speaking skills and each time I leave, I feel like I’ve learned something invaluable.  Most of the tools Donna has shared with us are also translatable to writing blog posts and other ventures, too.  As of yesterday’s meeting, I’ve committed to hosting a workshop on how to avoid getting overwhelmed with materials selections for remodeling projects, so look for that announcement coming soon!

EPIPHANY #1: I’m tired of hating myself because I’m fat.

To be honest, this is still a struggle.  I yo-yo between acceptance and disappointment that I’m not more svelte…I keep eating chocolate, so what can I say?  At least the good days are more numerous than in the past.  After reading some interesting information about the effects of stress on metabolism, I’m focusing a lot of energy toward minimizing tension and stress…and I began that journey by firing an abusive client!  I have started practicing meditation and as a result have actually managed to get to sleep on a routine basis without a nightly dose of melatonin.  I have depended on that for years to get to sleep, so this is a huge quality of life improvement for me.

I haven’t gotten very far with this goal yet.  Main obstacle?  Wanting to do everything perfectly.  So what should be shot in a heartbeat takes me a few tries, and then the videos sit on my iPhone waiting to be edited.  The learning curve I face with anything tech-related is so daunting I avoid it until I have “the time” and you know when you think about it, no one ever has “the time” to do anything.  I’ve gotten inspired by Peter Shankman‘s social media blog/videos (via Donna Johnson) and realize these things don’t have to be anything special, it’s just important to do it.  So here’s one of the perfectly imperfect videos I shot at Uptown Modern last December, featuring some cool DIY shelving and a tip for making mid-century seating more comfortable: 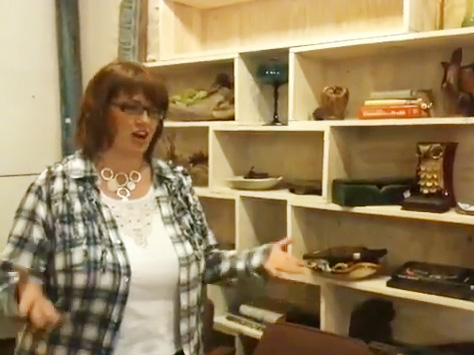 While you're watching this, take a drink every time I say the word "super."

I also have a big news flash coming in the next few days (hopefully) about something blog-related, so stay tuned for that!

I mentioned biz has been good…I can definitely see a huge difference over last year and don’t want to jinx anything, but could we finally be doing better as an economic whole?  Hope it’s a sign of great things to come.

Since the start of the year, Room Fu has taken on 63 new projects, which is crazy cool for a four-month period–and that’s not including the entire house we staged for the Modern Home Tour.  I hired a fabulous designer–Claire Patrick–to help me out, and if you are one of the clients who has worked with Claire, you know I am superlucky to have her on my team.  Not only is Claire creative, resourceful and enthusiastic, she’s one of the sweetest people you will ever meet in your whole damn life–swear to gawd.  I was also fortunate to have an amazingly kind intern–Marissa Abramson–onboard the last few months.  Marissa schlepped everything I needed schlepping while I hobbled around on crutches, and has pitched in on several installations, so I’m grateful to her as well.

Am I bummed I wasn’t cast on Design Star?  Yes and no.  Of course I wanted to do it, but I’m a big believer in the philosophy that what’s best will happen and if it’s not best, it won’t happen.  I was obviously meant to do something different, and I hope that includes interviewing the castoffs each week for the third time when Season 6 begins airing this summer.  Some people have asked if I would be pissed off at the cast members who were selected over me, and I can honestly say, absolutely not.  I will be insanely curious, I will be aching to see some great design, and I will hope like hell that those folks get a decent shot at displaying some real talent.  I like a good train wreck (aforementioned Housewives) but when it comes to design, the only wreck I want to see is the “before” shot…I don’t care about drama between designers or seeing these poor people try to make the Trump Tower look good with cheap-ass NYC souvenirs.  When it comes to design television, I think we all just want to be wowed, amiright? Fingers crossed we get our wish.

This time last year, I would never have released this video, would never have done half of the exciting things I’ve done over the past few months to push myself out of my shell.  I highly recommend doing the very things that freak you out, because there’s nothing like the feeling you get when you realize you can beat it.  And I’m thankful to Design Star Trent Hultgren, who inspired me to get this ball rolling to begin with!