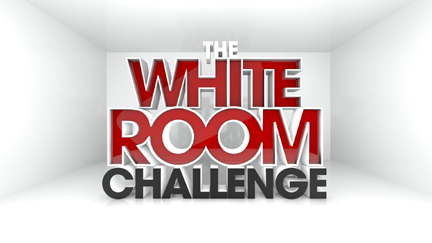 I want to like this show. I really, really want to like this show. But if you were one of the network execs and you were debuting a new show on television that doesn’t depend on airing the episodes in any particular sequence, you’d pick the end-all-be-all episode to use as your premiere, right? If that was in fact the case with White Room Challenge, then this is probably the last time I’ll take the time to write about it. A spin-off from Design Star, I’m gearing up for WRC to follow in DS‘s footsteps–a show that falls short of its incredible potential.

Having interviewed WRC host David Bromstad a couple of weeks ago for the Williams-Sonoma Designer Marketplace blog (link to come, when it goes live) and heard from the horse’s mouth that these rooms are “stronger than what you see on Design Star,” I had a certain level of expectation.

What a huge disappointment.

Normally, the designers shop in some genre of store that is not normally associated with home decor. The idea is to repurpose this odd assortment of goods and use them in unexpected ways. That kind of challenge inspires creativity, and since the room is not meant to be functional, the space tends to be much like an artistic installation. The designers in this episode shopped at a floral market and were required to incorporate 1,500 stems into their design. Unfortunately, only one designer dipped his toe into the repurposing waters. The remaining three designers held a death grip on literal uses for the plant material.

If I were going to title it, I’d call this episode White Room Challenge: Gluing Flowers to Stuff. 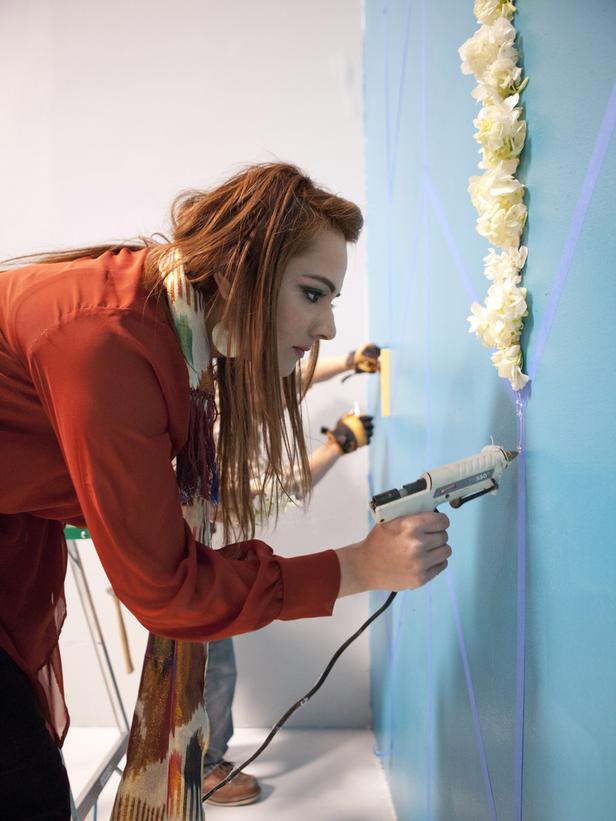 There were just two innovative ideas in the whole episode, and they were both created by the same designer, so let’s start the critique with him. 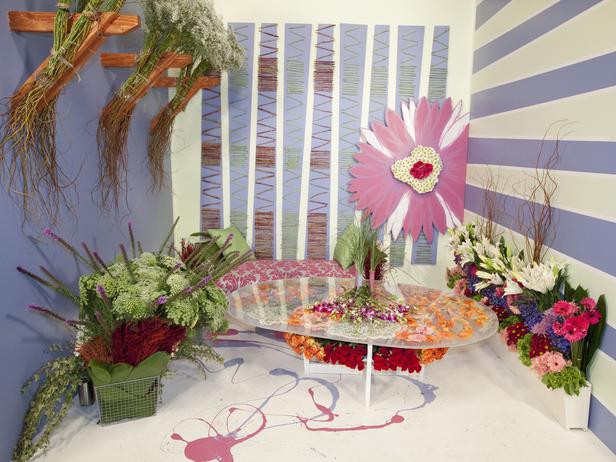 David Font is a landscape architect who claims he’s “never touched a flower in his life.” Okay, we get that you’re a big, strong man and all, but really? Seems far fetched. The second I heard that, I knew the producers were setting him up as the underdog and that he was probably the winner. (I was right.) Anyway, the two things David does that are worth noting are his pressed-flower coffee table and the bamboo effect he creates on the back wall with discarded flower stems. Other than that, there’s just too much going on. We’re striping walls for the hell of it instead of creating some sense with them. We’re also just throwing a lot of flowers in pots and planters. As much as I love the colors and appreciate the idea behind the coffee table, I don’t want to linger on this room…my eyes need a rest. 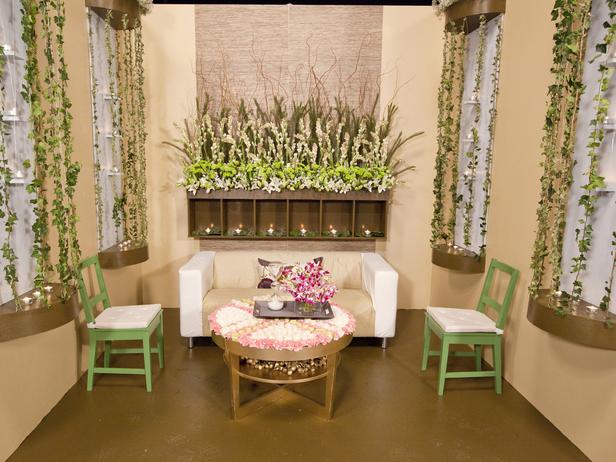 The visual peace I’m seeking is found in the “keeping room” design created by Matthew Bees. Matthew describes a keeping room as a place to stash people that you want to welcome into your home but you don’t necessarily want to let them “in” in. Matthew’s room is beautiful, there’s no question about that. Everything is tastefully done, well-proportioned, and as far as face value goes, my only beef is the odd color of green on the two chairs. While the room is pleasing to the eye, it’s too safe, too expected. The closest things to innovative are the “sconces” he creates with ivy on the side walls. There’s no element of surprise. But considering how gawd-awful the remaining two designs are, I’m shocked that Matthew falls into third place. 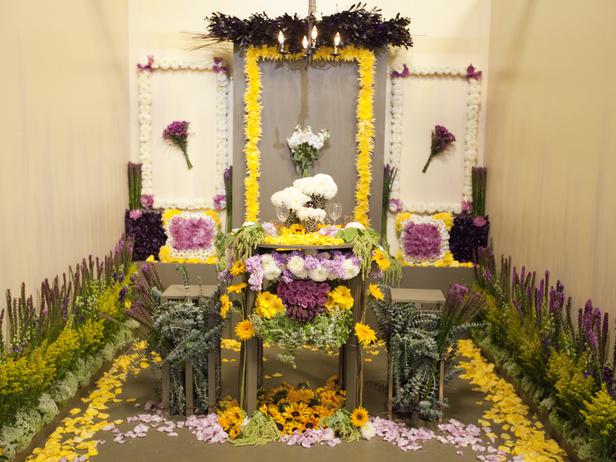 Carissa Marson’s “floral bistro” features nice pops of color, but other than that, I’m kind of horrified. The outer perimeter of the space is fairly clean, but it looks like Colin Cowie threw up in the middle. I’m also not digging the wedding-esque usage of petals on the floor. How cheesy can you get? When you draw in for a close-up view, it gets even worse: 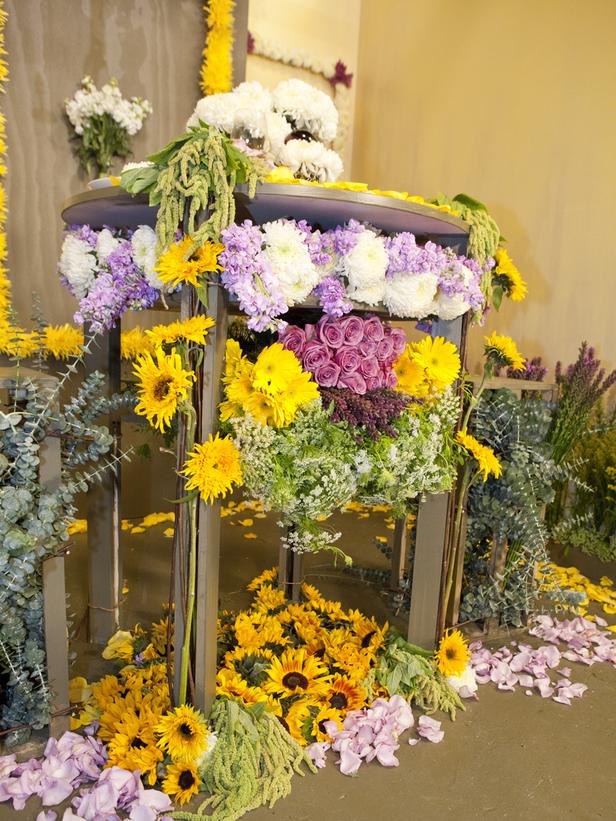 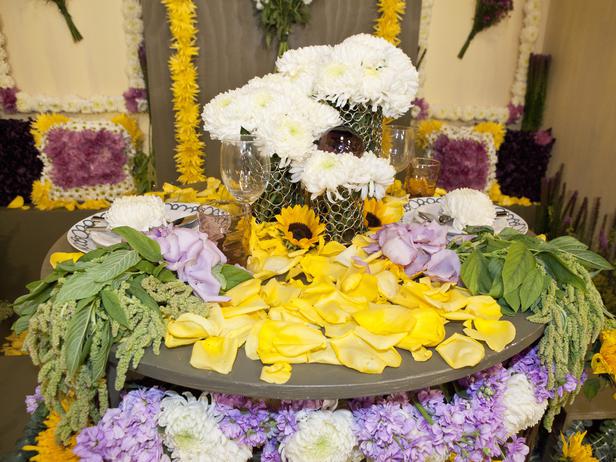 During the evaluation segment, judges Bromstad, Jamie Durie and Chris Lambton kept going on and on about how gorgeous Carissa’s room was. “Are you kidding me?” my seven-year old asked. “That’s the worst one ever. It looks like she just threw a bunch of flowers in there.”

I couldn’t have said it better myself. 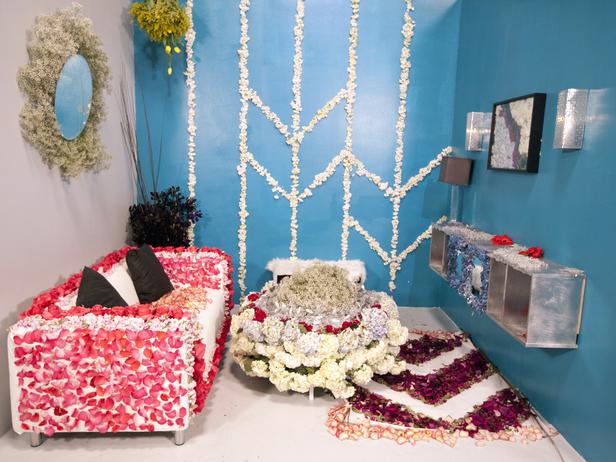 On top of this giant Rose Bowl Fail, we don’t have a feminine voice on the judging panel, and one of the men they do have doesn’t belong. Who the H is Chris Lambton? The Bachelor? Give me a break. Dude shows up in some fugly plaid shirt that looks like it’s been hanging in the back of his closet for fifteen years. He’s a landscape guy by trade and has a new show coming out on HGTV–which is a mystery itself–but if we have Jamie, we already have the landscaping quotient covered.

How I yearn for a WOW moment.