Why Are Hospitals Designed So Inhospitably?

Why Are Hospitals Designed So Inhospitably?

I’m coming to you live from a hospital bed.

We surprised Phoebe with a trip to DisneyWorld, but the surprise was on me. Before I even made it to the Magic Kingdom, I supersprained my ankle. That’s right.  Once again, I am sporting a Frankenstein boot and crutches.

To save my bacon, I rented a scooter to get around all of the theme parks.  (Can I just say, DisneyWorld is a virtual Rascal convention.  Who knew??) I thought this was the best thing ever–I get to motor around, the three of us head straight to the head of most lines, and I don’t make my injury worse.

And sure enough, my ankle started healing…until a blood clot formed in my leg.

Yeahhhhhhhhhh. So long DisneyWorld, so long Phoebe and Jeb, hello Celebration Hospital. (How’s that for a misnomer?) I missed out on our grande finale: a visit to the Bippidi Boppidi Boutique to get a princess-styled makeover for our Jasmine-obsessed dumplin, and coveted seats at the Royal Table in the castle at the Magic Kingdom for dinner.

Two days later, I had pulmonary embolisms…which, for people like me who need a Google translation, are blood clots in the lungs.  The bastard in my leg had broken up and moved upward.

Long story short, I’m thankfully gonna make it through this, but you know after six days in this joint with nothing better to do, my inner design critic is screaming, “Why, why, whyyyyyy??!!”  Why does this place have to be soooooo

Not surprising, right? When’s the last time you visited a doctor’s office, surgical outpatient center or hospital that didn’t have a death grip on an ’80’s color palette and drabness a-go-go.  If I weren’t already depressed by my botched vacay and scary medical condition, this room would do the trick. My room’s decor says, You’re so sick, your pasty-ness has leached into the very walls.

There is some color in the room. I have a privacy curtain to shield me when my door is opened that looks like it was created for a shower.  And by shower, I mean both something appropriate for a bathroom, as well as featuring colors you might use to fete your best pregnant friend.  Between this yellow-peach-blue blip better suited for a nursery, an ugly navy blue recliner, and the ubiquitous bordered linoleum floor in a mauve-beige-teal combo, these are the only bits of color you’ll see in my room.  The rest of it is buh-land: 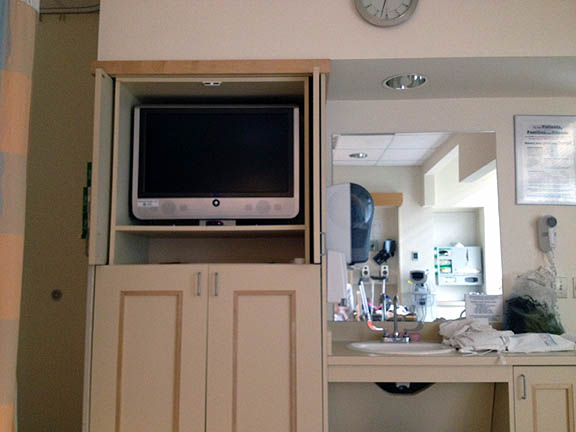 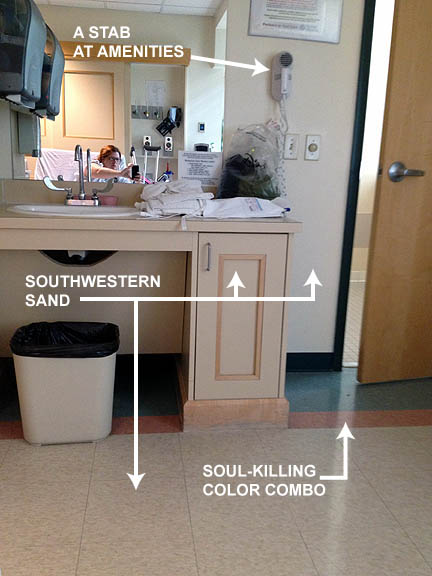 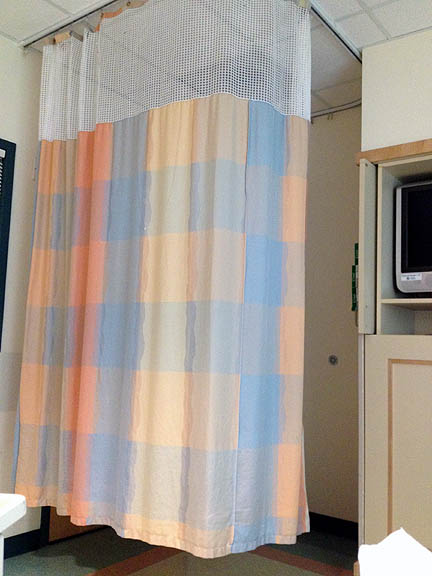 Then while passing the time surfing the Internets, I discovered an article on CNN.com about how famed architect Michael Graves has taken on hospital design after stints in eight poorly-designed hospitals and rehab centers inspired him to push for change in the industry.  A mysterious infection left him paralyzed from the waist down and during his various medical stays he started sketching ways to improve the functionality of these treatment facilities.  Functionally speaking, the esteemed Mr. Graves discovered a shocking lack of universal design features.

These facilities, which are created specifically to treat people with temporary and permanent mobility issues due to illness or injury, are not designed to accommodate the very people who are being treated.  And what does that communicate to the patient?  Your needs are not important to us.

It’s shocking to me that unilaterally implementing universal design features would be a revolutionary concept for a damn hospital.  But then again, I thought my attending physician would check some kind of drug interaction database–or, here’s an idea, the hospital pharmacy–before prescribing my various meds. (I was prescribed three questionable drugs that negatively interact with the blood thinners I’m taking for the blood clots. Do I sound bitter?) So maybe we just need to stop making assumptions about these places.

I don’t deign to presume I know how to improve the design of the structures themselves.  I’ll leave that to Graves and his architect peers.  But I do have some suggestions about how to make hospital rooms more attractive and/or comfortable and functional for sick and injured people:

Be a Hospital, Not a Hotel. Before I was shuttled into my room, I spent some time in the ER and a nurse on duty told me I was going to really love the rooms upstairs.  “They’re really nice,” she said. “They have hair dryers!” Well, la-di-da. Forgive me if I’m not slayed by an appliance I cannot use while I’m bedridden or while I’m hobbling around on crutches. Start with helping achieve clean hair status and then we can talk styling tools.  I know I’m surrounded by people with similar circumstances and wonder how on Earth a hairdryer is particularly appealing for someone toting machinery around with them, like oxygen tanks or IVs and the like.  Give us one salon-type shampoo station on the floor that will accommodate someone in a wheelchair or on a stretcher and you’ll have a lot of happy patients!  After three days of being denied a shower because of the equipment I’m hooked up to, I was starting to get nauseous–from my own hair’s stench.

Healthy Amenities. A water cooler would be an awesome in-room amenity.  Not only would it encourage healthy hydration, it would save countless staff hours if the nurses and techs don’t have to fetch another pitcher every few hours.

Notation Stations. The doctors making rounds might spend a whopping ten minutes in each patient’s room. Most people (and by “most people,” I mean me) have a laundry list of questions that fly right out of the cerebral cortex the minute Doc walks through the door.  Then it’s a whole ‘nother day before you get the opportunity to have your concerns addressed, which can delay your recovery and contribute to patient anxiety.  I’ve started keeping my list on my iPhone, but what about patients who don’t have smartphones?  Is a small memo pad and pen in the nightstand too much to ask?  Or some sort of voice memo functionality built into the bed, near the up/down controls?  This sort of feature would improve a patient’s level of care and give them some modicum of control over their recovery.

Small Conveniences. I would kill for a lazy susan on my tray table so I can rotate my dining tray. The dang thing’s so high and doesn’t fit over the bed while my foot is elevated, making it difficult to  reach the items behind the domed warming plate.  The rubber grippers on the bottom of the tray might be great anti-slip features, but they also make it harder to move the dang thing. If I were more frail, there’s no way I could rotate it myself.

Hello, Universal Design, Please. Built-in shower seats–this should be a no-brainer.  My en suite shower is so small, it does not adequately accommodate a stand-alone shower seat and does not have a fold-up seat installed. Not everybody in here can stand, grab bars or no.

Product Placement. I’m currently incarcerated being treated in a not-for-profit hospital, so I understand that they might not have the budget for motorized shades in every room. It does, however, seem like a great promotional opportunity for a window treatment purveyor. I don’t know what the statistics are for the number of patients, patients’ visitors, and hospital staff your company/brand would be exposed to, but I would guess it’s a heck of a lot. My room features the same mondo industrial metal blinds we’ve seen in institutions for over half a century. But the killer for me is, the cords that control these blinds are out of my reach.  A nurse offered to open them for me one day and had to step on the loveseat beneath the window in order to reach the cords.  I’m sure OSHA would have a field day with that one. I would not begrudge a promotional plaque on the wall in my room if it would afford me the ability to push a button and see the damn sky once in a while. 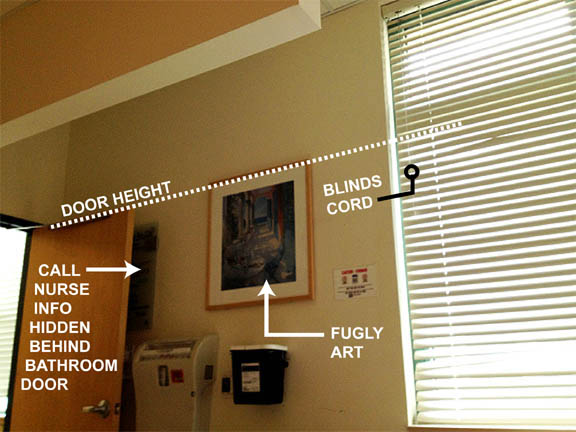 Consistency. Every nurse who has come into my room has complained that he/she cannot find basic supplies because they’re not placed in a consistent location within each room.  Seems like a simple fix that would save countless man hours, and could actually be a safety concern if they need these supplies pronto.

Door Controls. Privacy is a huge concern while you’re in the hospital. Most hospital beds are placed so they face the door to the room, and that’s great feng shui, but if you’re wearing a hospital gown, you have an increased risk of exposing yourself to passersby in the hallway if the staff inadvertently leaves your door open after a consult. Or, let’s say you’re chatting with family or friends and don’t want the world outside your room to know the intimate details of your convo, you’re up a creek.  If you’re bedridden like I was for a couple of days, you can’t close it yourself, and it feels so demeaning to push the call button to ask someone to close the damn door.  If I could lay here and push a button for the magnet to release, that would be a-w-e-s-o-m-e.  I can control most of the lighting from my bed, and of course the television…adding the blinds and the door to the mix would further automate the room, relieve hospital staff, and allow a patient further independence and some semblance of control over their environment.

Basic Hygiene. My sink is in my room, not my bathroom. Consequently, I have to crutch from the bathroom to the sink with unclean hands.  After I wash my hands at the sink, where do they go?  Onto unclean crutch handles.  I can’t clean the crutch handles–dripping water around the feet of crutches is a disaster waiting to happen.  Conversely, if one of those handy-dandy hand sanitizer dispensers was next to the toilet, this would not be a problem.

Doctor Info. As I sit here with my new iPhone, I am wishing for an app that would show me all of the doctors on my case, my current nurse and tech, and general info about the hospital I’m in. I’m guessing a fair number of patients are in the hospital due to an event that was not pre-planned, like an accident or a catastrophic health development, like me.  I’ve never met these doctors before and cannot for the life of me remember all of their names.  Sure, you can usually call up the hospital’s website on a laptop, tablet or smartphone, but what about the patients who don’t have the benefit of these gadgets?  A simple printout or space on the white board in every room to note doctors’ names would be awesome.

These are just a few things that I’ve noticed.  I know there are lots of you out there who’ve had much more lengthy stays and much more serious conditions who could probably add a bazillion more ideas to this list. Fingers crossed, I’ll be out of here this weekend, winging my way back to the Lone Star State and far, far away from this dreckitude of a hospital. For those of you who are being treated in such a place, I wish you a speedy recovery and safe return home.