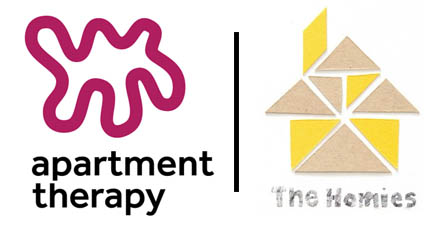 Every year, Apartment Therapy offers their readers a chance to nominate and vote for their favorite home design and inspiration blogs–a.k.a. The Homies. Voting ended yesterday…here’s the resulting top 10:

We managed to drum up a decent showing and we’re very appreciative of everyone who voted for FU FOR THOUGHT! We ran a little giveaway here, but I guess we made it a little too complicated to enter as per the rules, because the entry period ended with zero “official” entries.

Apologies to everyone for making it so darn convoluted! We wanted you to (A) Vote, (B) Take a screenshot showing you voted, (C) Share the screenshot on Facebook, and (D) Tag Room Fu – Knockout Interiors in your Facebook post. A lot of people did the voting part–which, let’s face it, that’s the MOST important part of all, so THANK YOU!!!! Two people sent me a screenshot via email. One person shared a screenshot on Facebook but didn’t tag Room Fu. (Since it was someone I am personally FB friends with, I saw it). Three people stumped for us by sharing the Homies link and asking their friends on Facebook to vote for us. (Again, these were my personal Facebook friends, so I was able to see that.) 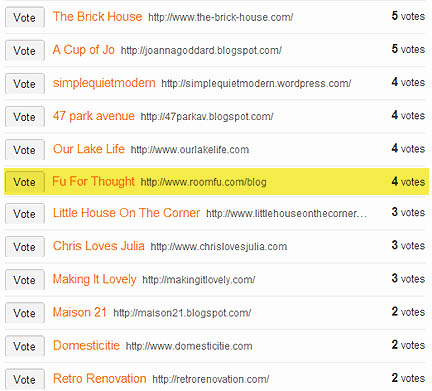 Please vote for Fu For Thought!

If you asked anyone to vote for us and we didn’t see it, I am both appreciative and sad that we couldn’t include your name in this giveaway. Perhaps we’ll hook you up during another giveaway in the future, since we’re definitely hoping to up the ante on giveaways this year. We are learning along the way and will definitely focus on making it easier to enter in upcoming giveaways.

SO. What happens to the book? Should it sit in its virtual warehouse since there were no “official” entries? Or should it go to one of these dear people who tried to enter?

Here are the people who either sent me screenshots of their vote or urged their peeps to vote for us via Facebook, in chronological order:

So, Barbara, CONGRATULATIONS! We’ll be sending you a copy of Apartment Therapy’s Big Book of Small, Cool Spaces! 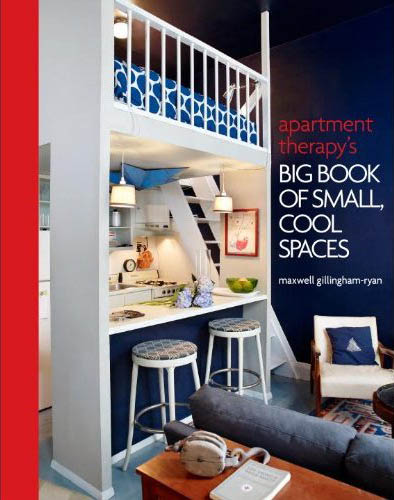 Update 2/11/13: Just realized the results of this Homies “vote” was for nominations, not for the actual winning blogs. Weird. Oops! If you’d like to vote for any of the six finalists, go here.