I was already over this episode before it even started. As a general rule, interior designers just don’t know enough about plants to put a cohesive landscaping plan together, and I put myself in that same category. So it just seemed like a doomed enterprise from the get-go and I was so bored with the episode that I’ve putzed around all morning because I felt so uninspired to write about it…but here goes:

The pergola was boring.

The furniture was boring.

The pool surround was boring.

The plantings were boring.

I’ll admit I was at a loss. I feel like this is the season of Design Star where we have a bunch of designers just trying to “get ‘er done,” and not necessarily doing any design work. Especially considering they already had a $25K budget and still had to have Daddy Clivebucks bail them out with an extra five thou. I’m admittedly not the authority on outdoor design, so I decided to call someone who is. 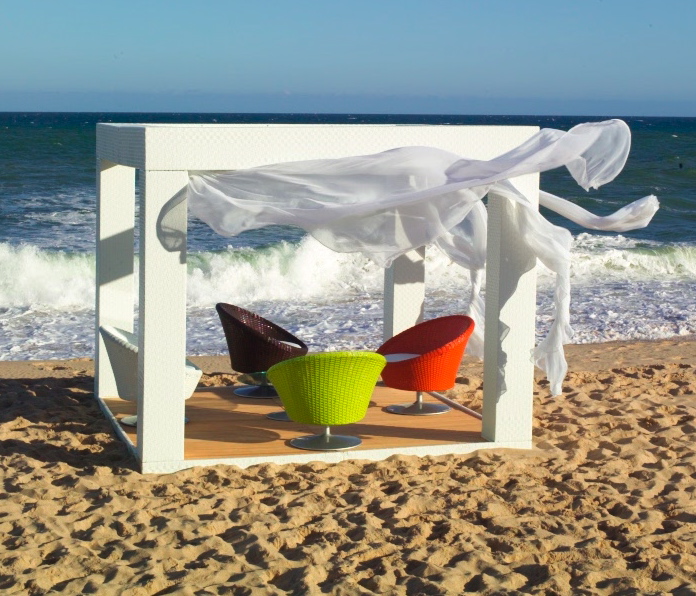 Another pergola-ish idea from Jason's portfolio.

“That challenge would’ve been so easy for me, and I would’ve been $10,000 under budget—easily,” Jason said. “You can use a lot of plants that are less expensive that have big impact.”

That whole honkin’ big backyard for fifteen grand? How, Jason?

“I would’ve used a lot of Eureka palms and the bamboo could’ve been a cheaper style. They bought one of the most expensive bamboos out there…they should’ve brought in traveling bamboo. They could’ve contained it by burying vertical sheets of tempered glass into the ground, making a glass box around the bamboo. If you do that and leave that glass cube sticking up out of the ground about three feet, it would add architectural interest and keep the bamboo from taking over your yard.”

As for the pergola that added more off-screen than on-screen drama, Jason had a fabulous idea I wish I’d thought of myself. “They could’ve put up four 4×4 posts and stretched the coolest, loudest fabric over it like a bikini top for $400 and it would’ve looked a lot better than the *expletive* $10,000 white vinyl big-box-store pergola, which was ridiculous.”

Other ideas and points of interest that Jason brought up:

They could’ve used the bench from my first room!

They could’ve found some inexpensive metal furniture and painted it with brighter colors.

None of the fabrics they used were outdoor fabrics, so they’re going to rot and fade within a very short timeframe.

Use flowering plants! (Even I think this was self-explanatory.)

“That little river of rocks that Lonni and Dan were trying to do? That’s decorator bull***!”

A hammock would’ve been nice!

That big tree where they started to put the rocks, that was the perfect place to put the sandbox because that kid’s gonna climb the tree and if he falls out, sand is going to be much softer than hitting the rocks.

Beach pads by the pool would’ve given them extra seating and huge pops of color. 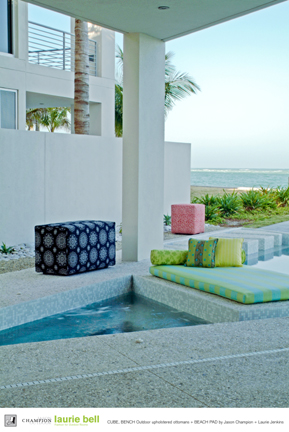 Before I wrap up, I’d be remiss if I didn’t bring up the whole Dan pulling off his shirt thing. He did it in such unnatural way that they couldn’t even use tricky editing to make it look like an authentic moment. Looks like someone’s trying to capitalize on all of the “shirtless Dan Vickery” Googlers out there. And I can tell you from personal experience, there’s a lot of ‘em out there, so good for you, Shirtless Dan. However, if you don’t want to end up being permanently cast as a David Bromstad wannabe, at some point you have to stop repeating Bromstad’s highlight reels. Just sayin’.

In the end, Torie became The New Dan, turning all giggly and awkward during her hosting segment, which I didn’t expect after her decent performance last week. Then Dan said he was going to take responsibility for the pergola snafu, but when push came to shove and the judges asked who was ultimately at fault, he batted those dyed eyelashes at the judges and threw Torie under the bus, lickety-split.

As if that hasn’t been done to death either.

Please, oh makers of Design Star…please give us something worth watching next week!

Tomorrow: my interview with Torie Halbert!