September 11 weighs heavy on all Americans. I imagine no one writes that date on a check (if you still write checks) or schedules a meeting on that date in their calendar without certain images and feelings coming to mind. I can’t help but feel guilty booking something on 9/11. Is it ethical or moral to make money on a day like that? Is it somehow diminishing the memories of the lost to do business that day? But you have to move on, yadda, yadda, yadda.

Like boomers who trade stories about the day President Kennedy was shot, we all seem to have 9/11/2001 etched firmly in our brains. I remember what I was wearing, where I was when I first heard, and most of the morning. After living in Manhattan nearly eight years, I had moved back to Texas and had been in Austin for a little more than a year. It seems weird to remember this, but driving into work that morning, I was feeling really good about my outfit. My friend Juli–a former co-worker from my NYC days–called me to report that a plane had crashed into one of the World Trade Center towers. I didn’t want to talk and drive, so I turned off my phone for the rest of my commute. I didn’t understand the significance of the story yet.

When I got to work, there were crowds of people in the lobby. Curiously, there were several TVs that had been pulled into the waiting room and the nearby cafeteria.

Hearing about the second plane and knowing that it was all intentional was a shock. I joined my co-workers watching CNN in the cafeteria. Minutes later, the towers started to collapse before our very eyes. My hand flew to my mouth in disbelief. Seeing the clouds of smoke and debris flying was unreal. It couldn’t be real. It just wasn’t possible. The World Trade Center? You’ve gotta be kidding me. I don’t think anyone breathed for a full minute.

Then the tears came.

It wasn’t like New York City hadn’t been touched by the threat of terror before. A former co-worker had recounted stories about how many times she’d had to evacuate her office because of bomb threats when she’d worked in the Met Life building, which was located atop Grand Central Station. After terrorists detonated a truck bomb in the parking garage of the Trade Center in ’93, concrete barricades were brought in to surround the block where I worked in midtown because there happened to be a foreign embassy in our building. Cops were posted at entry points for a couple of days to check IDs before you could go through the barricade, which enshrined our building for a few weeks following that event. Delivery trucks became suspect.

Still, I never would have anticipated such an epic disaster ever coming to fruition. To a certain extent, the city seemed untouchable.

And then suddenly, it wasn’t.

I haven’t been back to New York since 9/11. Not because of any scaredy-cat avoidance issues or anything, but I tend to want to spend my travel dollar on places I’ve never been before. Since I’ve never seen the crater in real life, I get to keep my memories of the skyline intact. Until I go back and see otherwise, I can still see in my mind’s eye the Twin Towers off in the distance as I walked home to my apartment in the West Village. I can recall all of the times I took my friends and family downtown, shooting pictures of them on the Brooklyn Bridge with the towers in the background. Who would ever have thought they wouldn’t always be there?

So I hope you’ll forgive me a little nostalgia, but on this day I’m taking a pictoral walk down memory lane, in honor of my favorite city on Earth.

1. Selfie with Empire State Building, taken from a tour boat on the East River, sometime within the first couple of months of moving there. 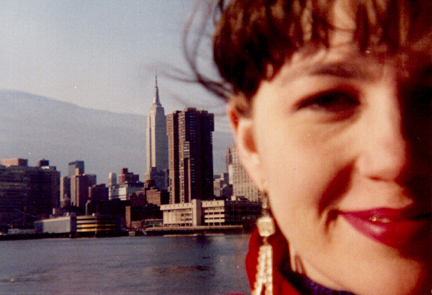 2. I was sort of a dork for the Chrysler Building, taking many shots like this one on my way home from work. 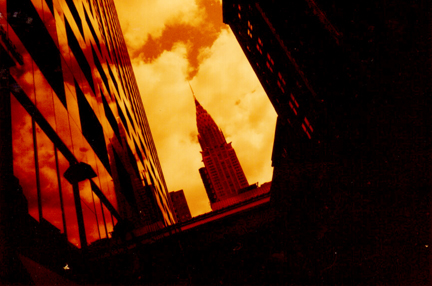 3. How did I initiate my mom on her first trip to NYC? Took her to Lucky Cheng’s for dinner on her first night in the city. 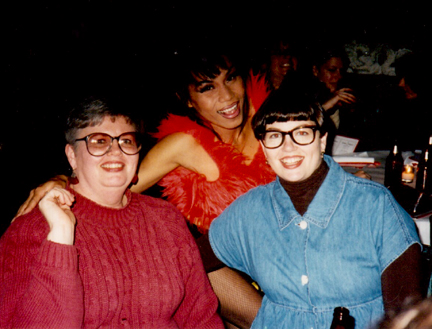 4. This is one my favorite pictures of my mom, with wind in her hair and the skyline in the background. 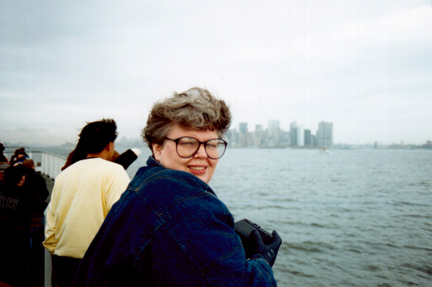 5. Mom and I went to a taping of the David Letterman Show… 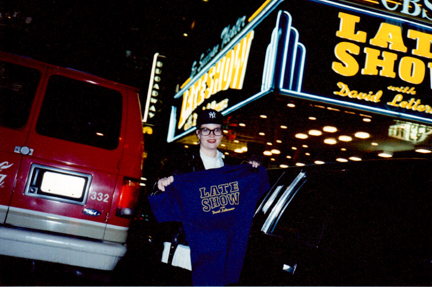 …and ended up in an audience cutaway! 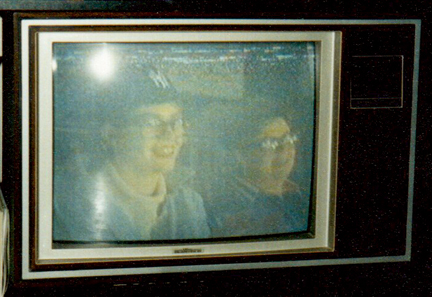 6. My tiny, two-room studio apartment in the West Village. Its claim to fame was that the fictional character of Phoebe on Friends lived there on the show. 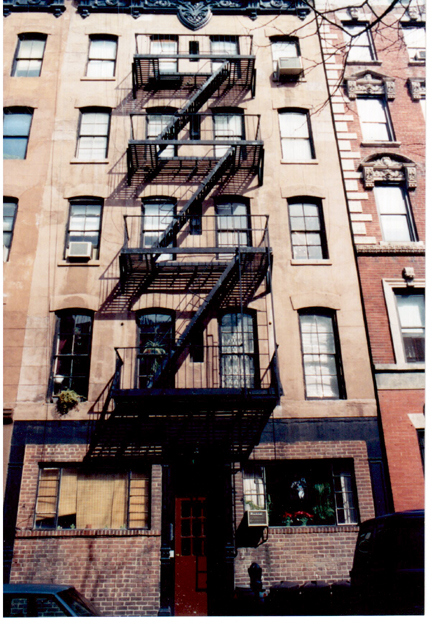 It had a whopping six inches of counter space… 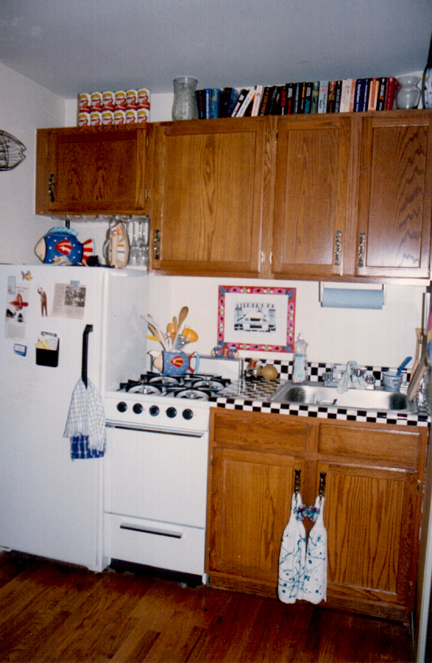 …a tranquil view from the living room windows… 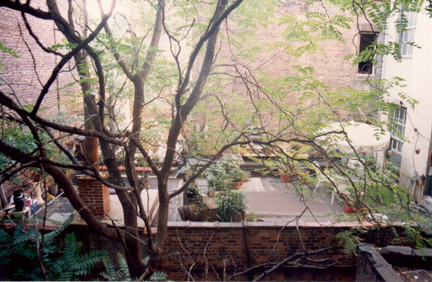 …and was located on Morton, just steps away from tourist-y Bleecker Street. 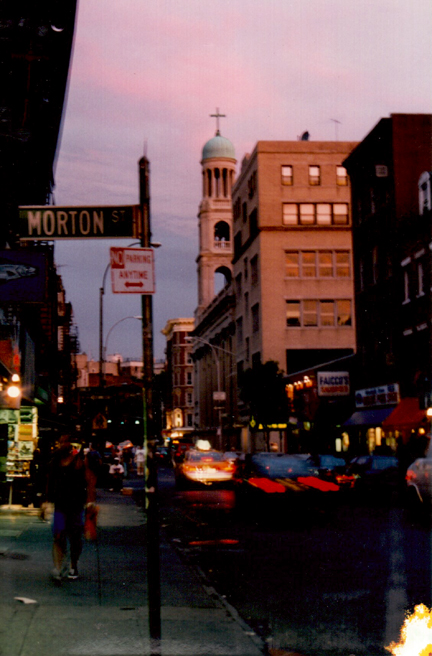 7. If you were a Seinfeld fan, you may recognize where I took my dad on his first visit. 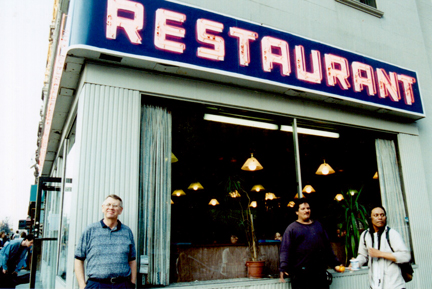 8. I can’t think of my dad visiting the city without thinking of the Royal Canadian House of Pancakes. Not only were the pancakes and waffles out of this world, their “pancake-size” pancake literally covered a table and was so large they had to flip it with a snow shovel, a la Uncle Buck. My dad requested a repeat visit three times during his first stint in town. 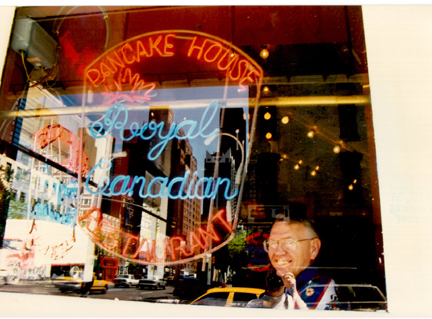 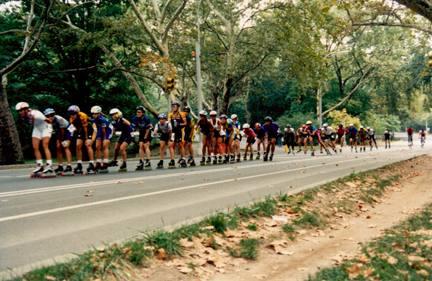 10. Clockwise from top left: me, my Aunt Yvonne, my grandma, my Aunt Linda, and my mom, the year they all came for a girl trip. 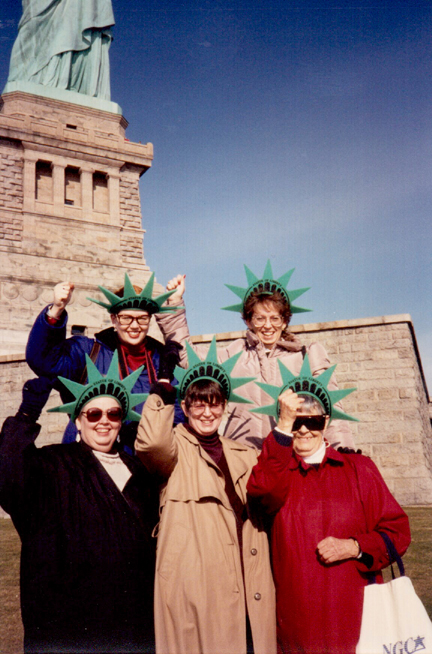 11. And finally, the iconic towers… 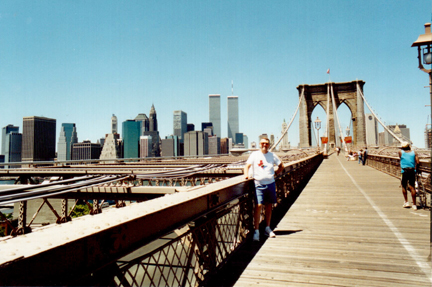 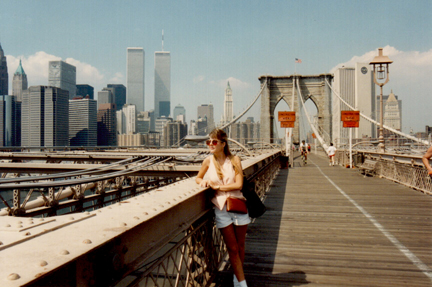 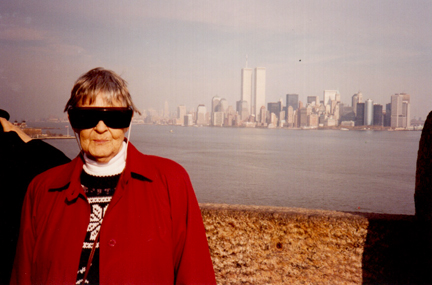 How I loved every electric minute I lived there.