Years ago, Austinites Mark and Jody bought a decommissioned railroad caboose and parked it in their Boudin Creek backyard, with the dream of turning it into a hangout space or a casita of sorts. 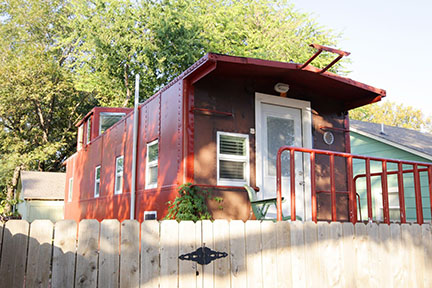 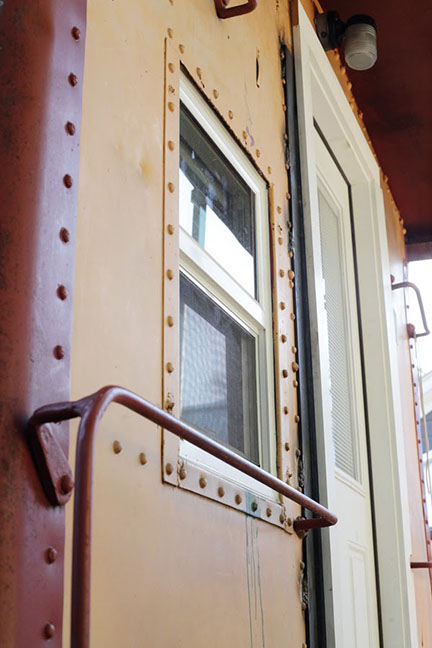 This was waaaaay before tiny houses were all the rage, so they were pioneers ahead of the tiny house trend. But they’d never gotten around to doing anything with it, and it had became more or less a place to store things that would ordinarily go into a garage.

Then the pandemic hit, and as many families during that time, they were challenged to find a way to carve out both a home office for Mark, and a place for his and Jody’s two young sons to conduct remote schoolwork. Mark found himself working in the caboose out back, but it was a hollow metal enclosure, without insulation or climate control in Austin, Texas, which is inherently unfriendly to humans and their computer equipment. It seemed like a great time to launch their caboose conversion into a tiny house, but they were struggling with how to plan out the space and sought our interior design expertise to flesh out the interior.

A train caboose being a train caboose, this project also had the unique challenge of fitting all of the interior zones around a jillion existing windows and exterior doors, all of which had to stay in their present locations, because it would just be too cost-prohibitive to change the metal exterior. There was also an area near the entry door that featured a higher ceiling level, with upper windows on those higher walls.

They had come up with a plan to create a small bathroom near the entry, which would extend underneath the higher bump-up so that the shower was underneath one of those high windows. Mark imagined a plant ledge above the shower, to take advantage of the natural light coming in from that window, and the steam from the shower. But as far as how to manage the rest of the space and all of the functional zones they needed, they were unsure where to put everything.

Here’s what Mark had put together on Sketch-Up: 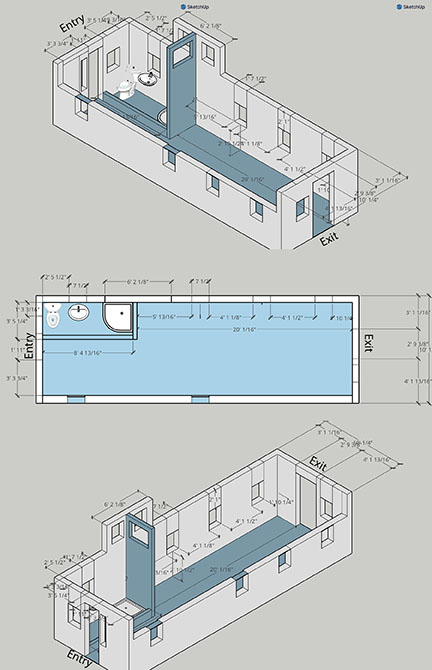 I loved the mental image of Mark’s idea to create a very plant-centric bathroom. But making all of the other functionality fit into the remaining space in the caboose was super challenging until I hit on the idea to move the bathroom to the back of the railroad car. I realized that if I could get Mark and Jody onboard with the idea of letting their back door be part of the bathroom, we could fit a whole-ass tub and shower—which seemed like supreme luxury for any tiny house—and we could create an open concept space in the rest of the caboose, with a living area, kitchenette, and plenty of workspace for Mark. Plus, we could let all of the light from that bump-up area come streaming into the interior.

Here’s the layout I proposed:

In addition to this layout, I also suggested that they add uplight wall sconces to the upper walls of the bump-up area, to light this feature at night. As with all projects, Mark and Jody made a few tweaks to my spaceplan to make things work better for them, and y’all…

When you scroll down and see how this precious space turned out? YOU. WILL. DIE. WITH. CABOOSE. ENVY.

Now, before we go any further, I have to gush over Jody’s design sense and styling capabilities. I helped them pick out this sweet paint palette and greenlit some choices they made on finishes, but beyond that, all the credit for the cuteness you’re about to see belongs to Jody. I just wanted to include this project in my portfolio to show how collaborating with a professional interior designer can help even the most creative, visionary folks get un-stuck and expand the potential for their interior spaces.

Okay, now take a look at how this adorable caboose-slash-tiny-house turned out! 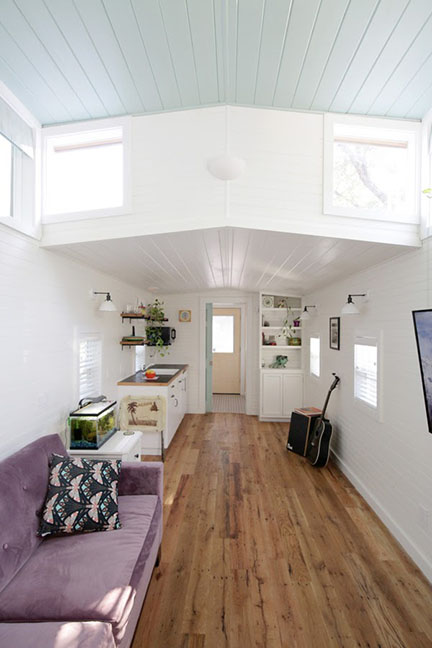 This is the view as you step into the railcar. The light just floods into this enviable space, and, um, did you see that purple velvet sofa?? DROOL!!

Here’s a look at the entry side of the caboose, with its cute little beadboard ceiling in pale aqua in the cupola, and Mark’s reimagined plant ledge. 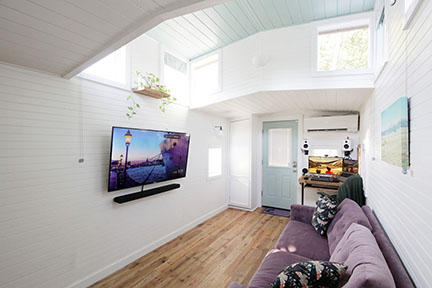 Wouldn’t you love to make breakfast (or cocktails) in this kitchen? She’s small, but she’s not missing a thang. 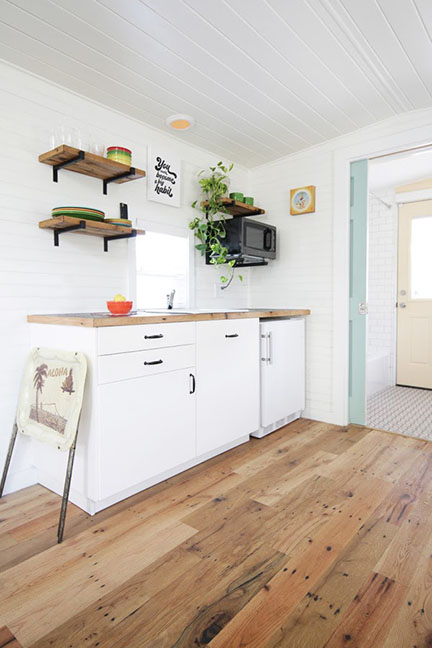 How I covet Mark and Jody’s Hawaiian-themed mid-century TV tray! And how about this gorgeous, reclaimed natural wood flooring throughout the combined living/office/kitchen space? It was supplied by Texas/Iowa Reclaimed. 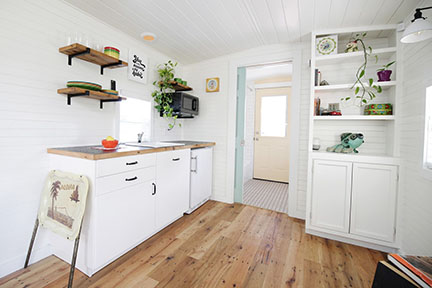 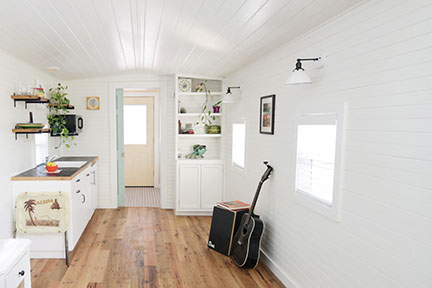 Mark and Jody added a built-in cabinet in the kitchen area, which showcases some of their fun mid-century decor and accessories. 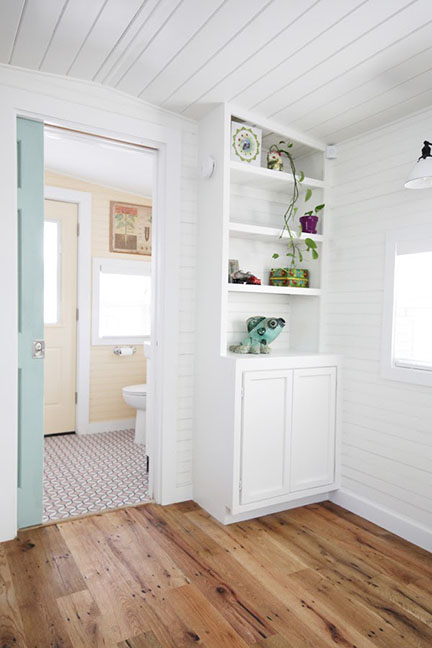 Wall-mounted reclaimed wood shelves in the kitchen hold a few glasses and some rainbow-hued Fiestaware. 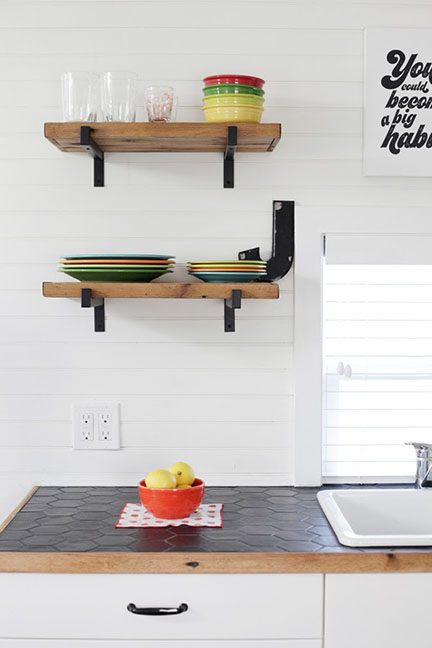 Black hex tile on the countertop is surrounded by a reclaimed wood edge detail. 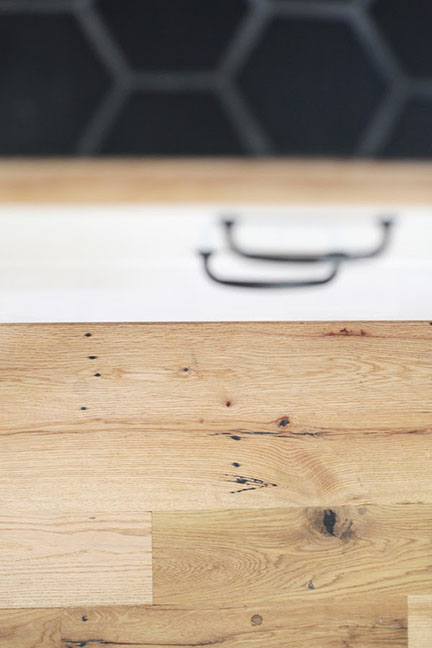 Mark’s small, yet well-appointed home office workspace inside the caboose/tiny house is still located near the entry, but they opted to rotate it to the adjoining wall. 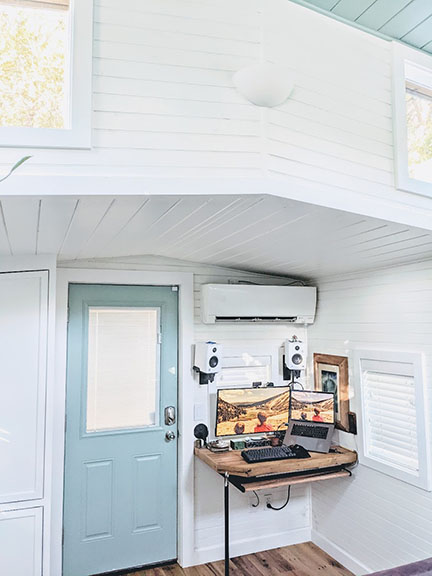 Now let’s take a look at the bathroom. It feels like an ice cream dream! 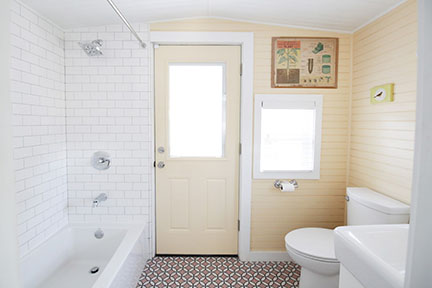 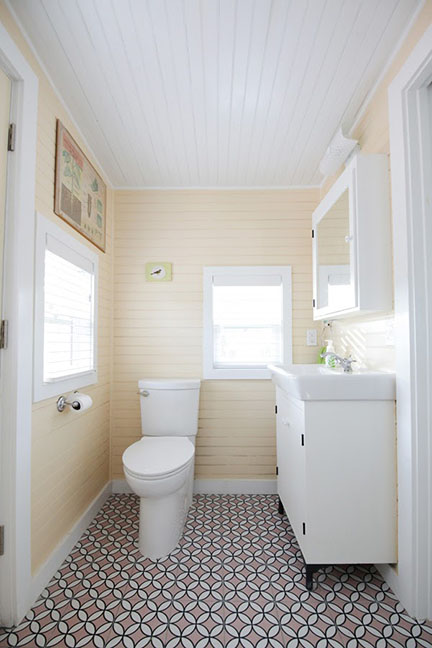 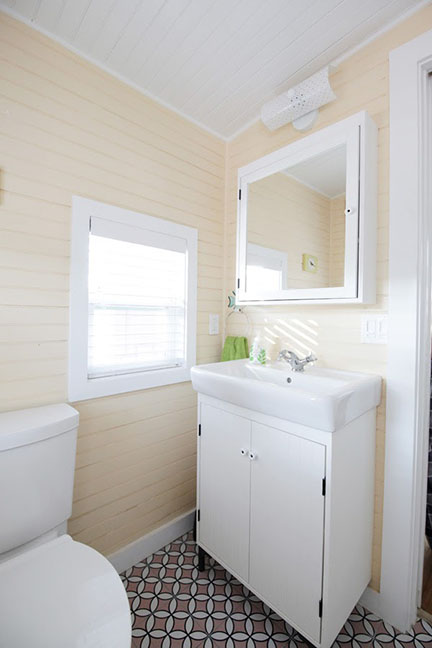 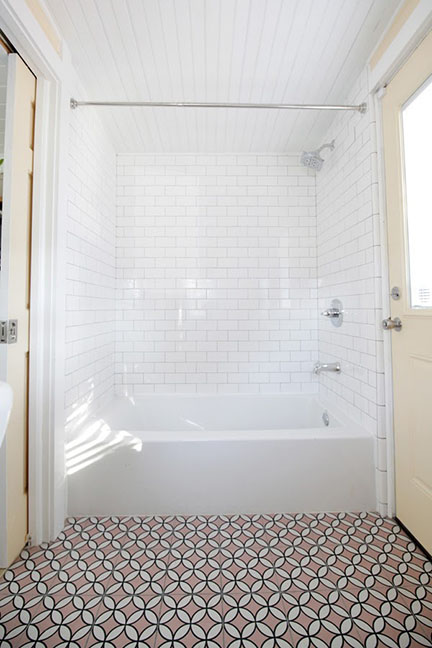 I’m a sucker for anything pink, but this pale pink geometric floor tile and butter yellow wall paint combo just makes me smile!

The best part of working on the project? This feedback from Mark:

I’ve loved the layout—an open cupola area makes the whole place seem much bigger than it is. And the light is epic.

If you find yourself stymied by how to maximize the functionality of your own upcoming remodeling or redesign project, whether it’s a bathroom or kitchen remodel or reworking your living room furniture arrangement, we’d love to help you resolve your design dilemmas. Just call or text us at 512-797-5821 to get started!