Room Fu staged this home for the 2011 Modern Home Tour in Austin, Texas.

In true Austin fashion, we transformed the second bedroom of this modern showplace into a personal music lounge. 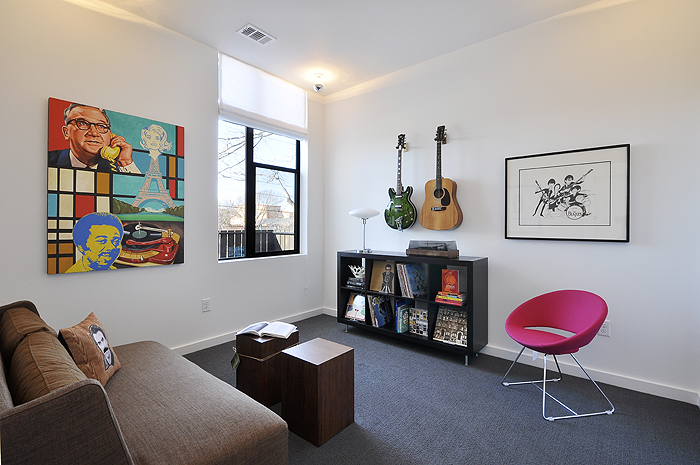 Austinites are familiar with Rory Skagen’s many murals around town–most famous is his Greetings from Austin on the side of Roadhouse Relics on South First.  We fell in love with his retro-looking paintings (pictured at left) on display at Blue Genie during last year’s East Austin Studio Tour and felt a little brush with greatness when he agreed to let us borrow one for our music lounge.  The loveseat from Five Elements Furniture is both chic and ubercomfortable, and that little bit of hot pink chair (also from FE) tamps the testosterone in the room.  The folks at Strait Music were kind enough to lend a couple of guitars for the event, which we displayed as art on the wall.  Photog friend Suzy Q said she got such a kick out of people’s reactions when they noticed Bolsa Bonita’s Tom Selleck-inspired pillow (complete with furry mustache!) that she stood outside the doorway for a few minutes to watch everyone’s expressions–it was quite the hit!  Roman shades from Budget Blinds diffuse just enough light to cut the glare from the enormous window.